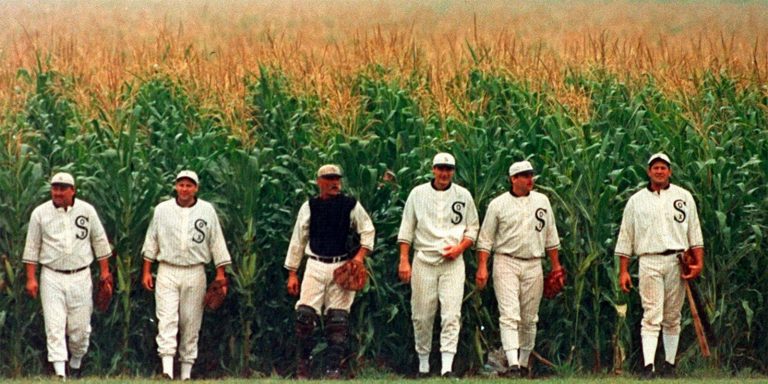 I started writing this list in 2007 and finally picked it up again. So many famous movie quotes aren’t what we think they are.

I started researching this list in August of 2007. That’s almost a year before I officially launched the website. It’s been sitting at the bottom of the queue, just festering there for four-and-a-half years, long since forgotten.

Over the weekend, I was searching through my unfinished archives and when I clicked on this, to quote NBC’s ill-fated catchphrase, it was “new to me.” So I decided to give this list its proper due.

BUT… because I started it in 2007 and abandoned it, I’ve decided to finish it using exclusively August 2007-era references. Here are 11 famous movie lines that are constantly misquoted, spun through a five-year-old lens.

That could also totally be a quote from a sex tape. I was going to say “Paris Hilton’s sex tape” but that reference feels dated now. Who’s that friend of hers who just had a sex tape come out with Brandy’s brother? Kim — something Armenian. I forget. I think she’s dating Reggie Bush now. Good call on her part. He’s destined for huge money as an NFL superstar (once the Saints figure out how to use him and, ya know, maybe win once in a while); we’ll probably never hear her name again.

Right: “Play it once, Sam, for old times’ sake, play As Time Goes By.”

How amazing would it have been if right then, the movie just cut to black and ended, like The Sopranos had the balls to do? (On a side note, I am SO glad that The Sopranos used Don’t Stop Believin’ in that scene. Amazing song. Maybe that exposure will make more people familiar with it. It might even get overplayed! Not likely. I could never get sick of it.)

Anthony Hopkins never says “Hello, Clarice” in the entire movie. Moreso than a lot of the other quotes on this list, that actually shocks me. Made the hair on my head stand up like Sanjaya’s faux-hawk! (At least it didn’t make the hair fall off my head to make me look like Britney Spears. Zing. Sorry. I forgot we’re all supposed to Leave Britney Alone!)

It’s tough watching Tom Cruise movies now. I’m especially sad for the Mission: Impossible franchise. The third one did ok last year but I heard the series is dead, all because of Tom Cruise’s bad reputation. He’ll be lucky if five years from now he can snag a role in the 20th High School Musical sequel. That’s just a juggernaut with no end in sight.

Right: “You’ve got to ask yourself one question: ‘Do I feel lucky?’ Well, do ya, punk?”

Sometimes, I think the incorrect versions of these quotes really make them better. Like, I appreciate the shorter version of this one immensely. The real Clint Eastwood line is just so wordy. That’s why I’m sort of debating signing up with this new Twitter thing. I don’t know. I just finally pulled the trigger on Facebook and have been scaling back my MySpace use. (Facebook is cleaner, I like how it’s totally not cluttered with stuff. I think it will stay that way. But I’m spending a fortune on these Facebook gifts. Brilliant strategy for them to monetize the thing.)

Right: “Mrs. Robinson, you’re trying to seduce me, aren’t you?”

Just that little twist in the phrasing ruins this constantly-quoted line. Speaking of little twists, I hate to veer off topic again, but I’m still completely reeling from the Lost season finale. Jack had a *flash forward*, not a flashback. And suddenly, I can see the pieces coming into place of how we’ll get some answers on all the unresolved story lines. Take it home, boys, and finally give us those answers.

8 | Wrong: “Win one for the Gipper.” (from Knute Rockne: All-American)

Right: “Sometime when a team is up against it and the breaks are beating the boys, ell them to go out there with all they got and win just one for the Gipper.”

You can’t misquote the greatest of all motivational speeches! If only LeBron had said this to the Cavs, maybe they wouldn’t have gotten swept by the Spurs in the NBA Finals a few months ago. Oh well. LeBron is a Cleveland icon and a future American hero, on a course to be the most beloved athlete in history — he’ll get plenty more chances to win one for Cleveland. Meanwhile I think he could go over and give this speech to the Indians… with the way this team’s playing and all the young talent locked up, I feel like I’m looking at the beginning of a dynasty.

Right: “The point is, ladies and gentlemen, that greed, for lack of a better word, is good. Greed is right, greed works.”

Very classic Michael Douglas moment. Almost as classic as his inevitable divorce with Catherine Zeta-Jones. That guy is just too smooth, too virile and too cancer-free to stay with her much longer.

Right: “Toto, I’ve a feeling we’re not in Kansas anymore.”

In Dorothy’s defense, these days, no one’s in Kansas anymore because Mark Mangino has eaten all of them. That guy’s one hell of a football coach. Seems a little rough around the edges and maybe doesn’t have the integrity of a Bill Belichick, Jim Tressel or Joe Paterno, but I bet he could take any of them in a gravy-eating contest.

11 | Wrong: “Mirror, mirror on the wall, who is the fairest of them all?” (from Snow White and the Seven Dwarfs)

Right: “Magic mirror on the wall, who is the fairest one of all?”

I just went over to my buddy’s brand new house and he’s got a magic mirror. And by that I mean his house is extravagantly made entirely of mirrors so it’s almost invisible. I’m not sure how he’s planning to afford it on a Chili’s busboy’s salary, but he said it’s all good. Something about a sublime mortgage maybe? Anyway, we kicked back, watched a few HD-DVDs… speculated on when they’re finally going to reveal the mother on How I Met Your Mother (seriously, it’s been long enough)… and got hammered on something called Four Loko. I woke up six days later in a ditch.

The Billy Madison Quandary: Why No One Can Ever Make a Definitive List of Its Best Quotes