11 Fake Movies From Seinfeld That Really Need To Be Made 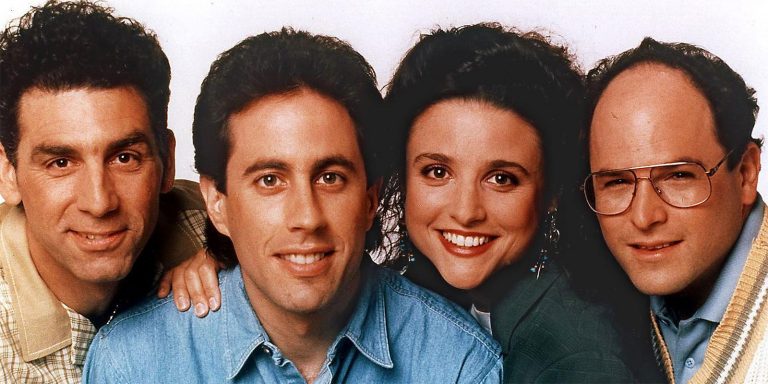 Seinfeld invented a bunch of fictional movies during its run. Which should really happen?

I’ve been wanting to do a Seinfeld list since I started this website and rather than go for an old angle like best Seinfeld minor characters or worst post-Seinfeld career moves, I decided to go down a more obscure path.

One of my favorite nuanced touches of Seinfeld is that they made up a bunch of weird movie titles… titles that sometimes became running jokes throughout the series.

Yes, they reference real movies (like The English Patient and Schindler’s List)… but, more often than not, the characters talk about and watch movies with hilariously generic titles and premises.

These are 11 of the fictional movies from Seinfeld that really need to be made into actual movies.

In the remake, I think we’re looking for a young actress who needs a character piece. How about the girl who plays Cerie on 30 Rock? Or Lindsay Lohan in her triumphant comeback?

In Chunnel, there’s an explosion in the Chunnel. And, apparently, the U.S. President’s daughter gets stuck in there. The convoluted plot ended up breaking up Elaine and Susan’s newfound friendship.

If I’m remaking Chunnel, I think I go for the 24 angle. I might even make this a new 24 movie. Seems like a good plot for Kiefer and the CTU crew. (I have no idea who the CTU crew is anymore, by the way, I totally gave up on 24. It just got to be too much.)

This is the movie all four of the characters want to go see… yet they all find themselves watching Rochelle, Rochelle. I believe Checkmate is about a king who likes chess… and finds himself in real-life jeopardy when, like in the game, everyone is after the king.

According to transcripts, this FANTASTIC dialogue exchange happens in the movie:

Man: I didn’t know you enjoyed chess, your majesty.
King: Why wouldn’t I?
Man: Because the king is always in jeopardy.
King: Yes, but it’s only a game.
Man: (suspiciously) Yes, of course. Only a game.

I think this would be my favorite movie to make of all these. I’m not sure which direction to go with this, but I’m thinking Joaquin Phoenix as a young king, Helen Mirren as his mother with a secret, and Matt Damon as the outsider sent to figure out who’s trying to commit regicide. Maybe the tagline could be: “Who’s the pawn?” and the poster could feature a chessboard in the background and all of the characters standing on it, staring straight ahead.

Jerry leaves in the middle of this movie, when he realizes Kramer’s friend is bootlegging it. Kramer follows him out… then laments missing the death blow.

Kramer also mentions the tagline of this movie: “When someone tries to blow you up, not because of who you are, but for different reasons altogether.”

This is totally a movie where Adam Sandler is, like, an amnesia patient who has government secrets hidden somewhere, but he can’t remember where. And The Rock is the only one who can protect him from the Soviets.

This sounds like the greatest action movie ever. Harrison Ford jumps out of a plane and shoots back up at the plane while he falls. A helicopter lands on a car. Frank Constanza is furious to find out that detail because it spoils the movie for him.

Strangely enough, in 1998, a movie called Firestorm was actually made. But with a GIANT… and I don’t think my capitalization does the giantness justice… step down from Harrison Ford. The movie starred Howie Long instead.

And it didn’t involve any plane or copter action… it was about a group of convicts who stage an escape by setting their prison on fire. Howie Long is the good guy who tracks them. The movie cost $19 million and, for some reason, wasn’t straight-to-DVD… it went to theaters and pulled in under $4 million its first week and just over $8 million overall.

If only so we can all have our George moment and, when the Hindenburg blows up, we can all yell, “That’s GOTTA hurt!” And so we can smack down anyone using a laser pointer in the theater that detracts from said joke.

I like what Sack Lunch represents… it’s a movie that opens on the same day as The English Patient, and represents a non-pretentious, comedic option.

Of course, if you go see it over The English Patient, you’re worthy of scorn. But I bet Sack Lunch could be really funny with the right writer and cast.

I’m thinking Jason Bateman as a counselor at a summer camp for underprivileged kids, who somehow end up in an end-of-the-summer cooking competition against the rich kids from the camp across the lake.

If I was going to remake this movie, I’d still set it in Paris, and like Jerry said, I’d still let one character try to buy back a loaf a bread that symbolizes his soul.

And I’d make sure there was a lone dancer at the end whose dance was actually part of the movie.

The only thing I know about this movie is that Kramer says it when he’s impersonating the Moviefone guy. It could go one of two ways.

It could either be a biopic of Van Morrison, perhaps played by Bradley Whitford or Steve Zahn. Or it could go a different direction and be a romantic comedy about a gypsy who curses a bunch of people so that their eyes only turn brown when they’re in the presence of their one true love. I see Angelica Huston as the gypsy.

10 | The Other Side of Darkness

This movie will change the way you look at comas. Of course, you don’t want to be like Kramer and jump to a conclusion about your future resuscitation before you make it through all two-plus hours. People can wake up from comas. Even the female coma victim in The Other Side of Darkness whose husband is played unforgettably by Eric Roberts.

I’m afraid that if someone tried to make this movie now, in post-Terry Schiavo America, they’d try to get too deep into the who-pulls-the-plug? debate, which is a shame. I just want to see Eric Roberts go on an emotional journey. (As opposed to his really creepy, dislikable journey last night on Entourage.)

Why hasn’t there been a movie made about a guy who goes out looking for the Fountain of Youth? George really liked this movie, and Elaine hated it. They probably should’ve just gone to see Prognosis Negative.

If I’m making this movie, I’m casting Vinnie Chase as Ponce de Leon. Give him a chance to redeem that Spanish accent after his disaster in Medellin. Of course, if he bails, naturally, I’m going for Benicio. When you’re casting a Spanish conquistador, Hollywood doesn’t give you many options.

Apologies to some of the films that didn’t make it: Prognosis Negative… Blame it on the Rain, which Elaine saw with Todd Gack… Means to an End… The Pain and the Yearning… Agent Zero… and Mountain High.

The Seinfeld Michigan Bottle Deposit Scam Is a Felony Worth Five Years in Prison?