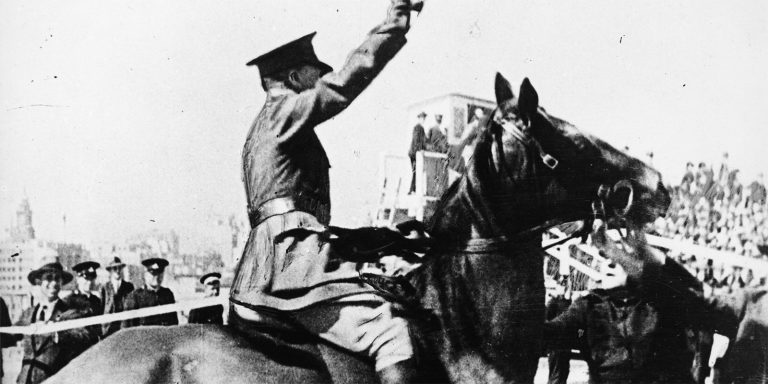 Even before Photoshop, dictators were having their photos edited to serve their propagandous purposes.

I’m not a huge history nerd — like Star Wars, anime and asthma, it’s one of the few nerd realms I’ve managed to avoid — but I am thoroughly fascinated by the history of propaganda. And also totalitarianism. I think I’ve watched at least six documentaries on North Korea. And like 20 on WWF/WWE.

I don’t know how popular this list will be — I’m guessing the headline alone will turn off a good number of people — but I think it’s really interesting stuff. Plus I made a million pop culture references to keep it from feeling too much like learning. I’ve got to be the first person to compare Trotsky to Harry Potter and Stalin to a girl on Match.com, right?

Here are 11 famous photos of dictators that were doctored and altered for various political reasons. Set your phasers to fun…

1 | Mussolini does his own horse whispering, thank you 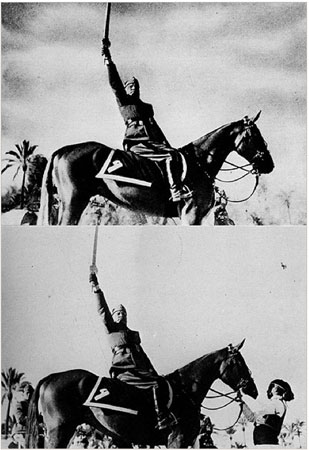 This photo, from 1942, is Benito Mussolini Bravehearting on a horse. (Will Bravehearting on a horse be the new planking? Let’s discuss it with the Facebook braintrust at a designated break period.) He had his horse handler removed from the photo. He also seems to have had some of those famous Italian clouds (?) added to the background. 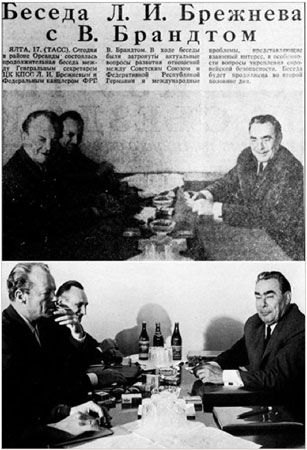 This is from 1971, when Willy Brandt, the chancellor of West Germany, had a meeting with Leonid Brezhnev from the Soviet Union. The bottom photo appeared in West German newspapers and shows they were boozing at their meeting — as Germans and Russians are wont to do. But the state-run Soviet media wanted to make it clear to the proletariat: YOU may all drink heavily and daily, but your leaders are above that. So they edited out the liquor. (And also found a smily-er Brezhnev. And a photo where Brandt looked like Phillip Seymour Hoffman.)

3 | The Ghost of Assholes Past 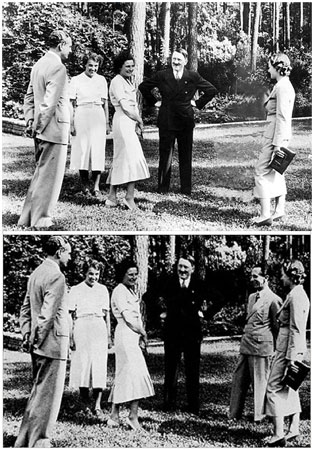 This is a photo of Hitler meeting Leni Riefenstahl in 1937. Joseph Goebbels was there (as you see in the bottom photo) — but Hitler had him removed. If you look closely at the doctored photo, you can actually see a ghosted silhouette where he was standing. My GOD where’s a Proton Pack when you need one?

4 | Death via the clone stamp 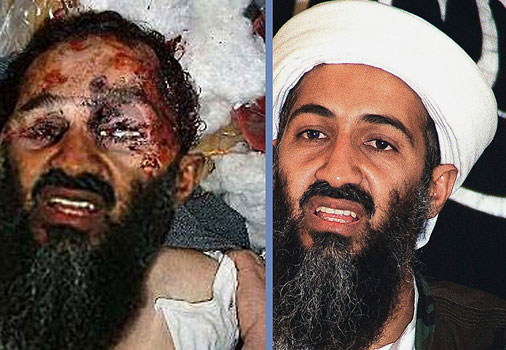 This is the first one on the list from the Photoshop era. But these are the mediocre results you get when your dictator Photoshops aren’t handled by the ministry of propaganda and are instead created by, most likely, a 19-year-old looking to get attention for his Tumblr. 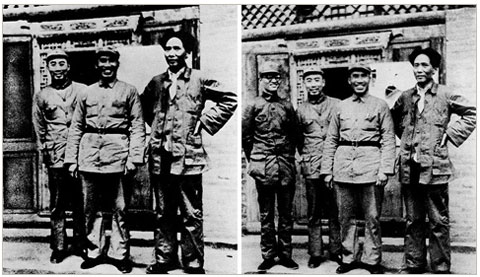 The original photo is from 1963 and features Mao (far right) with some of his crew. Eventually he had a falling out with a guy on the left, named Po Ku, so Po Ku was scrubbed from the photo.

By the way, Mao isn’t using perspective tricks to appear tall here. Unlike Kim Jong-Il, Mao actually WAS taller than the people he interacted with. As for why he’s doing the rare “double teapot” with his arms… that I cannot answer.

6 | America’s not so bad, they named a street after me 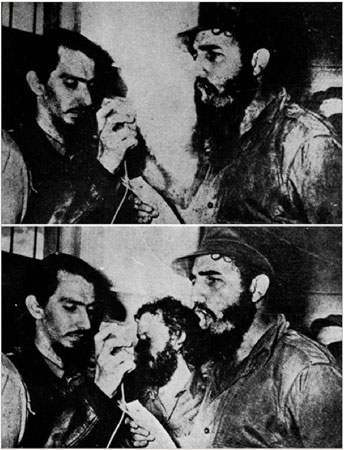 From 1968. Castro had the guy in the middle, a writer named Carlos Franqui who eventually turned against Cuba, removed from the photo. It appears he also had them touch up his beard while they were in there. As for his agape mouth that looks like one on a sexy blow-up doll… that abides.

7 | North Korea: Not so good at Photoshop, good at… um… um… having cold weather? 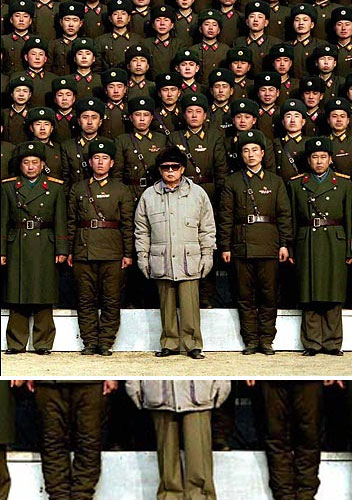 This photo was released a few years back to show us Western devils that Kim Jong-Il is alive and well. Only whomever Photoshopped him into this picture messed up. As you can see in the spotlight, the line on the white wall disappears for the portion where Kim Jong-Il was added in, then reappears behind the soldiers who were actually there for the photo. Also, when you’re trying to prove you’re not aging poorly, BluBlocker sunglasses are not a smart choice.

8 | In Soviet Russia, photo removes you 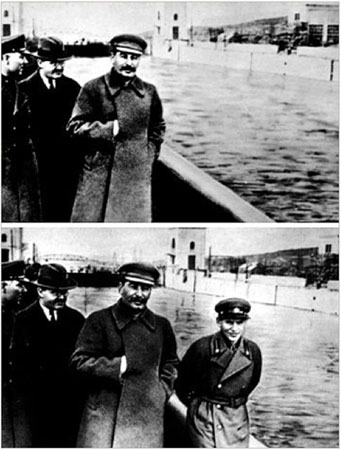 This is just one of many, many photos where Stalin removed a comrade who later became an enemy. He’s like the girl on Match.com who clearly has just cropped her ex-boyfriend out of half of her profile photos. Only, ya know, infinity-times more evil. 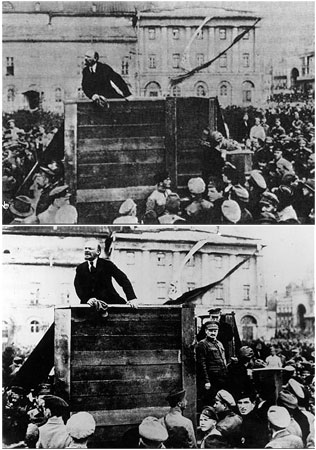 Here, Lenin had Trotsky removed from this photo where he’s addressing the troops in 1920. Like Harry Potter, it appears he put him under some stairs. The edited photo was published countless times, all the way through the collapse of the Soviet Union. As Lenin said — NOT “I am the walrus,” Donny — “a lie told often enough becomes the truth.” 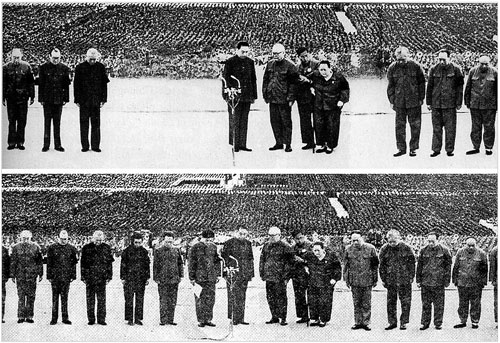 This is from Mao’s funeral. Even in death he was still having enemies edited out of photos. Even at the expense of making it look like only a few close friends showed up. That’s dedication. 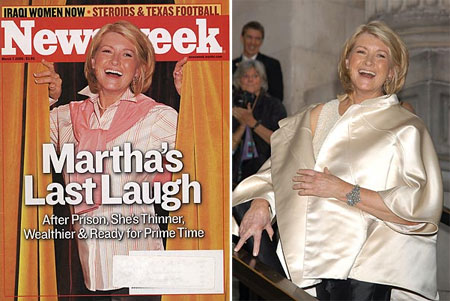 To quote Marge Simpson from the episode “Bart-Mangled Banner”… “I don’t know why they put the real ones in with the joke ones.”