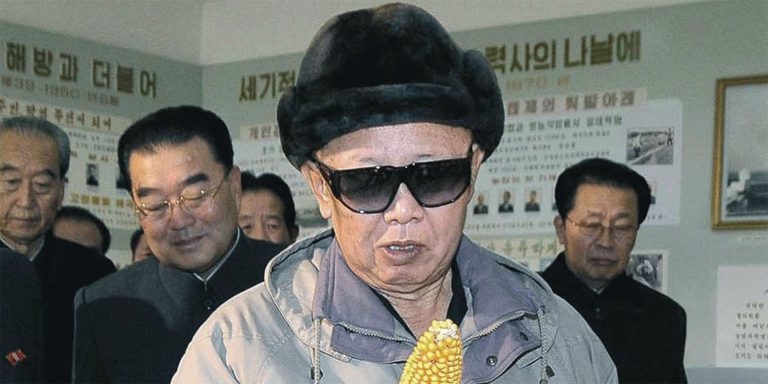 North Korea’s Dear Leader may be on his death bed, but he’s squeezed in more than one lifetime of insanity.

Word going around is that North Korean dictator Kim Jong-Il may be gravely ill.

Which made me realize I need to do this list, which I’ve wanted to do for a long time, while there’s still a remote chance that Kim Jong-Il will be alive to read it. (After all, he is a self-professed Internet expert and, until a few years ago, was the only person in North Korea allowed to go online.)

This is my all-time favorite Kim Jong-Il story. In 2006, Kim finds out that there’s a guy in Germany who breeds giant rabbits. Seriously huge rabbits. Like, rabbits the size of dogs.

And Kim just becomes enamored of these, to the point where he decides that giant rabbits will be the solution to his country’s widespread hunger problems.
So Kim gets in touch with 68-year-old Karl Szmolinsky of Berlin, the world’s foremost breeder of giant rabbits, and says he wants Szmolinsky to come to Pyongyang and set up a farm to breed these rabbits. For Kim believes that the meat yielded by these rabbits will end his people’s starvation.

Szmolinsky tells Kim this is, quite frankly, the dumbest idea possible. These rabbits only yield about 15 pounds of meat… and they have huge appetites… so they eat way more than that in carrots, potatoes and other vegetables. If anything, breeding giant rabbits would make the North Korea hunger situation even worse.

Undeterred, Kim pays for 12 rabbits, at a cost of about $115 each. He tells Szmolinsky that the rabbits will be kept at a petting zoo in Pyongyang and, in a few months, Szmolinsky will be flown in to help really set up a farm for breeding.

In February of 2007, about five or six months later, Szmolinsky gets a call from a North Korean official canceling that trip. Why? Because, Szmolinsky believes, Kim couldn’t resist… and ate the giant rabbits to celebrate his birthday.

2 | Kim shoots a 38 under par, complete with 11 holes-in-one, his first time golfing

You may not know this, but, according to the state-run North Korean media, Kim Jong-Il is the best golfer in history.

Back in 1994, North Korea’s first golf course was opened in Pyongyang, and Kim decided to play it. He’d never golfed before, but wow, was he a natural.
In his first-ever round of golf, he shot a world-record 38 under par… including another world record 11 holes-in-one! And even though all 17 of his bodyguards were eyewitnesses and swear they saw that go down, for some reason, the round-eye devils at Guinness fail to recognize either record.
After that round, the media tells us, Kim decided to retire from golf forever, lest he ruin it for us mortals.

Much like LL Cool J, The Luniz and Oscar Schindler, Kim Jong-Il loves tippin’ some Hennessy. So he imports approximately $750,000 worth of it every year.
(The average member of the North Korean proletariat makes about $900 a year, by the way.)

In fact, according to Hennessy, in both 1993 and ’94, Kim was their biggest single customer in the entire world.

Kim Jong-Il is only 5-foot-3. He hates this fact. He wears elevator shoes to hide it. He reveres people who are taller (apparently, when Secretary of State Madeline Albright visited North Korea, she brought him a Michael Jordan autographed basketball, which instantly became his prized possession).

In fact, Kim hates his height so much that he decided to fix the problem of North Korean shortness back in 1989… in a way that only a sociopathic dictator can.

According to Kim’s former tutor, who’s now living in exile in Virginia, in ’89, Kim was still seething over the success of Seoul, South Korea, hosting the Olympics the year before. So he created the World Festival of Youth and Students, an event and spectacle intended to outdo and embarrass the Olympics. (It didn’t, by the way.)

In advance of the Festival, Kim had pamphlets distributed in Pyongyang, describing a “wonder drug” that would make short people grow taller.

When people responded to the pamphlet, though, they quickly learned there was no wonder drug… it was Kim’s way of flushing out the shortest members of society (besides him, of course), so he could round them up and have them “sent away to different uninhabited islands in an attempt to end their ‘substandard’ genes from repeating in a new generation.”

5 | Kim has his boyhood school blown up

More from his former tutor. Even though Kim’s father was Kim Il-Sung, the former dictator of North Korea, Lil’ Kim still had to go to school. Kim was a “rather ordinary student” who ended up having to work hard to do well. (Which is pretty incredible, given that his teachers probably would’ve disappeared permanently if they gave him anything in the check-minus/frowny face range on an oral report.)

Years later, Kim ordered the military to blow up the school where he had worked so hard. The reason? That school was now teaching regular people, not just the children of wealthy communist officials, and Kim was afraid that it was giving students too much of a competitive advantage against his own children.

So, in the late ’70s, Kim decided he was going to kick start the North Korean film industry. His plan? Kidnap two of the South’s top filmmakers. One was Shin Sang-ok, a director; the other was Shin’s wife, Choi Eun-hee, a top actress.

And he went through with the plan, had them kidnapped and brought them to North Korea. He made them eat grass while forcing them to shoot his “Citizen Kane” — a pro-communist Godzilla ripoff called Pulgasari.

It was terrible, but Kim loved it, and wanted to make a sequel. In 1986, he began working on a deal with an Austrian film company to distribute that film… and took Shin and Choi to go meet with them in Vienna. In Vienna, they managed to escape, and, after a taxi chase with some of Kim’s bodyguards, they found safety in the American embassy.

Fortunately for Shin and Choi, they managed to start new lives in America. Unfortunately for Shin, his three features here were 3 Ninjas Knuckle Up, 3 Ninjas Kick Back and 3 Ninjas: High Noon at Mega Mountain. The last of which starred Hulk Hogan, Loni Anderson and Jim Varney.
(Shin died in 2006 from complications with a liver transplant.)

7 | Kim hires a staff to inspect his rice, to make sure each piece is the same size

In possibly the biggest example of his OCD, Kim apparently hates eating rice if every grain isn’t uniform in length, plumpness and color. So he hires a staff of women to go through each and every grain of rice before it enters his palace’s kitchen, making sure each piece meets Kim’s standard.

It’s always good to see communism working — everyone equal, a completely utopia, no one abusing their power — isn’t it?

8 | Kim makes sure he never gets addicted, or quits an addiction, solo

Kim Jong-Il doesn’t like to be addicted alone. And he doesn’t like quitting alone. And when you’re a communist dictator, it’s easy to have a multi-million person support group.

On doctor’s orders, Kim was told to give up smoking. So he did. And, at the same time, he decided to make every single other North Korean quit. (By the way, if you’re looking to quit smoking, I think the “quit smoking or we’ll kill you and your family” plan might be slightly more effective than Nicorette gum.)

In 1992, Kim was doing some horseback riding, and took a spill. His doctors gave him painkillers. Which he was fine with taking… until he heard that they can be addictive.

So, for the next month, every day, when Kim got his painkiller injection, a half-dozen of his closest staff members also got the same injection. That way, Kim figured, if he became addicted, he wouldn’t be the only one.

Pretty much every textbook in North Korea is Kim-centric. And many focus on biographical details.

A few notes stand out the most. One, children are taught that, when Kim was born (in February 1941), spring suddenly broke out and a shower of rainbows instantly appeared in the sky.

And two, children are taught that Kim does not produce urine or feces like a regular human. He transcends that.

Millions of North Koreans have died from starvation under Kim’s rule.

But he’s not really concerned with that. He’s using the country’s money wisely. Like importing $20 million worth of Mercedes… sending his personal chef to the Czech Republic to buy beer… sending his staff to Uzbekistan and Iran to get caviar… and, of course, importing a non-stop stream of white, blond Swedish prostitutes to have sex with him and his friends.

Well who among us DOESN’T do that?