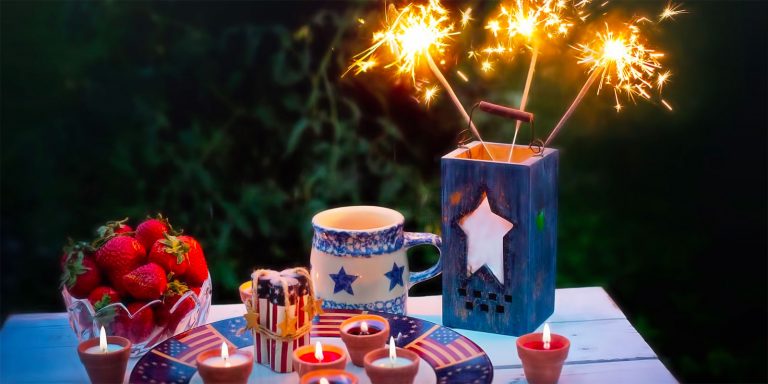 Did you know July 4th is also the day another country gained independence… from America? Plus more random Independence Day facts.

The main reason I like writing lists about holidays is that I start saying the word “holiday” a lot and that leads to me singing Holiday Road. I love that song. Back when people used to have ringtones, Holiday Road was mine for about 18 months.

Anyway, here are some 4th of July facts to share with your family and friends when the conversation swoons this weekend. Let’s jingo…

Americans now buy 700 percent more fireworks than we did 35 years ago… but injuries are down 90 percent. It’s some mix of better technology and kids actually listening to our little ka-blammo talk and realizing exploding things explode off fingers. And they need those for textin’.

In 2009, there was only one firework-related death in the U.S., and it was a guy who tried to launch a mortar shell from a tube on his head. In comparison, in 2009, two people died trying to tip vending machines over to steal candy.

2 | The 4th of July is also Rwanda’s independence day

So you’re at a family barbecue and your smart ass nine-year-old nephew says to you, “Is there a 4th of July in other countries?” just so you’ll say, “No!” and he can sing-songedly say, “Oh yes there is! And also a 5th of July and a 6th of July.”

Well, this year, cut that little punk off at the pass. “Is there a 4th of July in other countries?” “Yes, there is, because it’s just a day in the month. As while it’s not an independence day holiday in most of them, it is in Rwanda. It’s the day that commemorates when the horrific Rwandan genocide ended in 1994.” That way you’ll leave him scarred AND bring down the overall mood of the barbecue to make sure no one has a good time.

The Philippines was a U.S. territory from 1898 on. In World War Two the Japanese occupied it. The U.S. helped the Philippines fight them, when the war was over after Tarantino’s boys stormed that theater, the Philippines became an independent country on July 4, 1946.

And to celebrate, I assume they eat one of their national delicacies: Balut — which is a fertilized duck egg that’s boiled alive and eaten in its shell. Then again, we eat potato salad that’s been sitting out on the picnic table in the sun for four hours, so you tell me who’s grosser.

4 | It turns kids into Republicans

A study this year out of Harvard found that kids who go to 4th of July parades are more likely to turn out Republican because “the political right has been more successful in appropriating American patriotism and its symbols during the 20th century.”

Seems like a bit of a stretch to me, but whatever. Next study will say that watching a St. Patrick’s Day parade turns your kid into an Irish. Or watching an NBA team’s championship parade will turn him into a black guy. (Or a really tall German.)

Calvin Coolidge was born on a July 4th — July 4th, 1872. Koko the Gorilla, for what it’s worth, was also born on a July 4th. I bring that up only because either one would’ve looked good following Warren Harding.

In a 2010 Marist poll, only 74 percent said England/Great Britain. 20 percent were unsure and six percent named other countries. And even though I know posting this tired stereotype will draw the hate… wouldn’t you be willing to bet a lot of the 26 percent are the ones who love the anti-King George 2nd Amendment and keep an arsenal of guns in the house?

8 | It’s the biggest beer-selling holiday of the year

The top five, in order, are Labor Day, Memorial Day, Father’s Day and Christmas. I love that Father’s Day is on there. Do people need that much beer on Father’s Day? Who rolls up to their parents’ house to hang with their dad and put down 60 cans of Old Milwaukee?

9 | Despite what the media tells you, it’s not actually the most dangerous day to drive

I debunked this last year on my list of the most dangerous driving holidays. July 4th consistently has among the most total fatal crashes every year — but when you adjust for day of the week and the overall high accident rates in the summer, it’s actually just the *second* most dangerous holiday for driving. New Year’s Day is number one.

That’s right, I’m now citing my own proprietary statistics as a source. I’m the John Hollinger of dangerous driving.

10 | Americans spend the same amount on popsicles and charcoal

For July 4th weekend, Americans spend approximately both $111 million on popsicles and charcoal. I find something so poetic there (and not just because of the whole integration of the 11s.) It’s just such an American juxtaposition. It’s like watching Monday Night Raw while petting your brand new puppy. Or using Cheez Whiz as a marital aid.

This year, for the first time ever, there will be separate competitions for men and women at the July 4th Nathan’s Famous Hot Dog Eating Contest. And the initial plan was to give the women a smaller grand prize, although that’s since been Title IXed into the same amount. If nothing else, this opens a huge door for me to Juwanna Mann my way into hot dog eating fame.