Eleven spectacular news stories that stayed under the radar this year, including dwarf strippers, Phil Collins-inspired rest stop sex, body doubles in Congress and a firing over the word homophones.

Last year I did a list of 11 Fantastic News Stories From 2013 That Didn’t Get Enough Attention and I’ve got another wonderful crop to share this year.

These 11 stories didn’t quite crack through the pile of Internet stories — after all, it’s hard to get eyeballs these days without a title like, “You Won’t Believe What This Deaf Asexual Muslim Refugee Orphan Did For This Blind Bisexual Hindu Homeless Puppy, I’m Literally Crying at Number 5.”

But they deserve a look. Perhaps you will literally (which, of course, means figuratively) cry. WITH JOY. At number five.

(3/14) I can’t imagine the conversation that led 21-year-old Kevin Walters of Crystal Lake, Illinois to find out when and where his parents conceived him — but he found out. And he was honored. Apparently, Kevin was conceived at the Des Plains Oasis, a tollway overpass and rest stop, when his parents were overcome with loin-burning passion on the drive home after a Phil Collins concert. When the Des Plains Oasis was slated to be shut down in March, Kevin felt his place of conception deserved better than that — perhaps the opportunity to host more romantic couples? — so he chained himself to the doors to try to stop the closure.

Sadly, it didn’t work. The Des Plains Oasis (where I’ve been, by the way, and did not feel any romantic vibes) was shut down.

To the Chicago media’s credit, they traced Kevin’s story to figure out the actual concert after which he was conceived. Turns out it wasn’t just Phil Collins, it was all of Genesis, at Chicago’s World Music Theater in June of 1992. It got a fairly positive review. (Source)

(1/10) It’s the frivolous lawsuit o’ the year. A British woman named Jane Mulcahy got a divorce from her husband a few years ago. Shortly after the divorce was finalized, she sued her divorce lawyers — because they didn’t tell her a divorce would end her marriage.

Jane is Catholic, and says since ending a marriage is a sin in Catholicism, her lawyers should’ve steered her toward a separation instead. She initially lost the lawsuit, and appealed in January — which is when the reason behind her lawsuit hit the news.

Believe it or not, the appeals judge dismissed the suit. (Source)

(6/27) Timothy Ray Murray ran in the Republican primary in an Oklahoma Congressional race in June. He got 5.2 percent of the vote; his opponent, a 20-year Congressman, Frank Lucas, got 82.8 percent of the vote. After the loss, Murray contested the election results — claiming that the real Lucas is dead and was replaced by a body double or perhaps an animatronic robot.

Murray attested that Lucas was “executed by the world court on or about January 11, 2011 in Ukraine” and has since been either a body double or robot. His challenge never ended up going anywhere and Lucas is still in Congress. (Source)

(7/30) This one is just pure insanity. A guy named Tim Torkildson was an English-as-a-second-language teacher at the private Nomen Global Language Center in Provo, Utah. One of his jobs was writing about various English topics on the school’s blog. In July, he wrote a blog explaining homophones — that is, words that sound the same but have different spellings and/or meanings.

The owner of the school fired him because he felt the post on homophones promoted the dreaded gay agenda. He told a reporter, “People at this level of English may see the ‘homo’ and think it has something to do with gay sex.” (Source)

(10/9) This is one of those British tabloid stories that seems unbelievable, but you take their journalistic word for it since you’re not sure anyone could be creative enough to come up with this as a fictional premise. A woman in Valencia, Spain gave birth to a child with dwarfism in October — and immediately broke down and confessed that she’d had sex with the dwarf stripper at her bachelorette (“hen”) party so it might be his.

Now, it’s entirely possible that it was just a coincidence. She and her new husband could’ve had a baby with dwarfism — having sex with a dwarf isn’t guarantee you’ll give birth to a dwarf. But the baby brought out the confession and at least cast some doubt. (There was never a follow up article about paternity tests.) (Source) 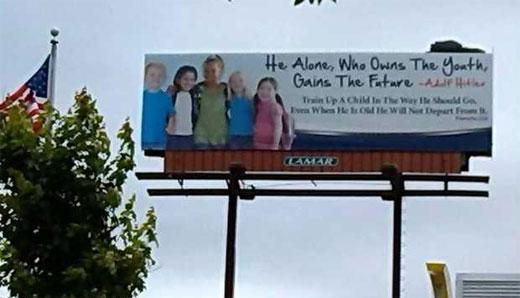 (6/2) This is a legendary miscalculation and/or a hell of a publicity stunt. Life Savers Ministries, a youth ministry out of Opelika, Alabama, put up a billboard outside a mall Auburn, Alabama in May featuring a photo of five happy kids next to an inspirational quote: “He alone, who owns the youth, gains the future.”

That’s a quote from Adolf Hitler. And Life Savers Ministries knew it — right there, on the billboard, they attribute it to him by putting “–Adolf Hitler” right after it.

After they were flooded with people calling them out, they didn’t exactly apologize. They pulled down the billboard after four days and the founder said they, “certainly never intended to cause confusion.” (Source)

One of those finalists was 38-year-old Ken Sullivan from Farmington, Utah. Ken has a wife and four kids, ranging from six months to 13 years old. And after he made the finals — his wife decided to divorce him. Because, she said, regardless of whether he makes it into the group of 24 who go to Mars or not, it’s clear he’s not all-in on the family.

She says he didn’t ask her before he applied and, “The question is: Do we get divorced now or get divorced later.” Apparently they’re going with now. (Source) 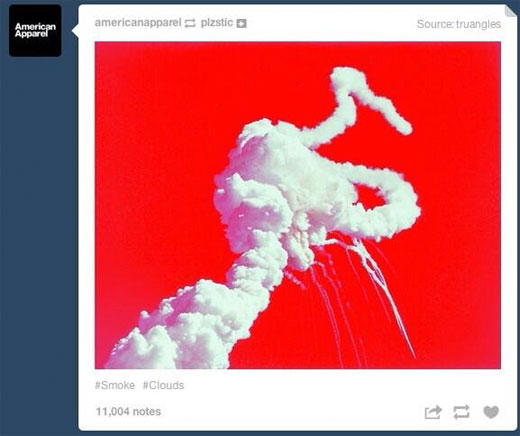 (7/4) This has to be the biggest social media gaffe of the year. American Apparel wanted to post a photo of fireworks exploding on their Tumblr on July 4th. The picture they picked wasn’t fireworks. They accidentally (I think, although you never know with the American Apparel people) picked a photo of the Challenger explosion from 1986.

They quickly pulled it down and blamed it on “one of our international social media employees who was born after the tragedy and was unaware of the event.” (Source)

The lead researcher — who’s female — said, “It’s possible that having many female sexual partners results in a higher frequency of ejaculations, whose protective effect against prostate cancer has been previously studied.” She stopped short of outright recommending that men go out and try to have sex as often as possible — “We’re not there yet” — although I’m not sure any men were planning to try to have sex with fewer women unless they got a scientist’s blessing. (Source)

(8/5) Is it worse to be mauled to death by an angry bear or to forever be known as the 42-year-old guy who had Justin Bieber’s Baby as his ringtone?

42-year-old Igor Vorozhbitsyn is a fisherman in the Yakutia Republic in northern Russia. He was fishing in early August when a brown bear attacked him. And as the bear was mauling him, Igor’s phone rang — with his Justin Bieber Baby ringtone that his “granddaughter loaded onto [his] phone for a joke.” Of course it was a joke, guy. It’s always a joke, right?

The ringtone startled the bear, who ran off — leaving Igor pretty beat up, but alive. (Source)

Tabitha won the Chickamauga Battlefield Marathon in Georgia in November with an impressive time of two hours, 55 minutes and 39 seconds. But there was a problem. Her time at the 13.1-mile mark was two hours, six seconds. That meant she had to have completed the back half of the marathon in 55 minutes, 33 seconds — which would’ve shattered the women’s world record for a half marathon.

The women’s world record for a half marathon is 58 minutes, 23 seconds. So race officials realized Tabitha cheated — because she cheated to such an extreme that she accidentally broke a world record in the process. (Source)

11 Scientific Studies From 2016 With Bad or Ridiculous Findings