I own a monstrous collection of t-shirts. Here are my 11 favorites.

It doesn’t really matter what I type here because no one’s going to read this sentence, you’ve inevitably already spotted the photo below and have blown right past this to look at it. 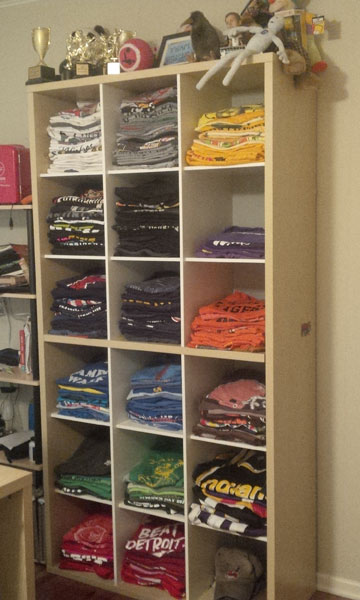 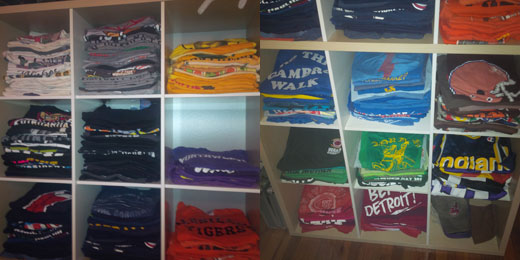 There aren’t many things I collect — old computer cords, maybe — other than t-shirts. Over my adult life I’ve amassed an absurd collection; I counted them for the first time yesterday and came out with 368 t-shirts. (331 if you don’t count sports jerseys or long-sleeved t-shirts.) And it would be higher if I hadn’t gotten rid of about 50 or 60 a few years back. This isn’t from me just grabbing any t-shirt I can find, either — all 368 are handpicked.

An old roommate of mine named JD once suggested that I start putting them in a bookshelf, organized by color, in some sort of art-meets-function-meets-hoarding synergy. I did, and I’ve kept them that way ever since.

But the collection, at least in its current form, is coming to an end. My wife (who, to answer THAT question, likes the collection, regularly contributes to it, and has not pressured me in any way to get rid of it) and I are moving next week. And for our move, we are trying to generally reduce our amount of stuff. I’ve decided to donate at least one-third of my t-shirts — or, more accurately, return them from whence they came, since at least half of these were thrift store purchases to begin with.

I won’t be getting rid of any of the t-shirts on this list, but I still wanted to do the list now, while the collection is as whole as it’s ever going to be.

Here are my 11 favorite t-shirts in my massive t-shirt collection. 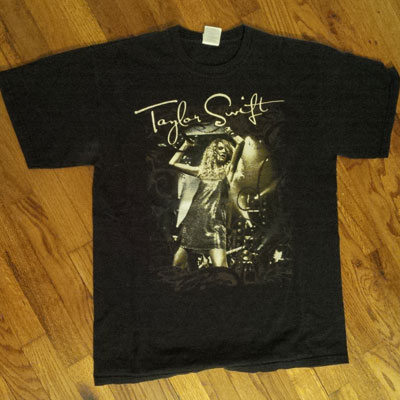 I’ve heavily resisted the 2000s trend of ironic or trying-too-hard t-shirts (e.g. “Your stupid” or “What has two thumbs and loves your mom? This guy”). The Taylor Swift manages to find a sweet spot for me. To some, it’s perceived as ironic that I, a man in his 30s, is wearing it — but in a more organic way than a t-shirt with an ironic slogan. But to others, who ask me about Taylor Swift, I can talk Taylor Swift. I enjoy Taylor Swift. Also, as an aside, I did not attend this or any Taylor Swift concert. 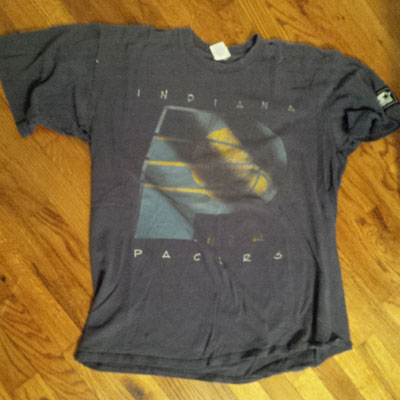 I’ve always been a Cleveland sports fan for better or worse, but if I had to pick any other professional sports team to root for, it would be the Indiana Pacers. (I even wrote about that in the second-ever 11 Points list.)

I like the Pacers because when I was in middle school (and both my NBA fandom and the NBA itself were peaking), the Pacers used to work out at the Jewish Community Center gym when they were in town to play the Cavs — and I used to go there to play basketball pick-up games myself every day after school. I got to meet all of the early ’90s Pacers and became a big fan.

I got this t-shirt, along with a Detlef Schrempf jersey, at the Pacers official team shop at their arena when my parents and I were doing a Midwest road trip at least two decades ago.

9 | I can’t be overdrawn, I still have some checks 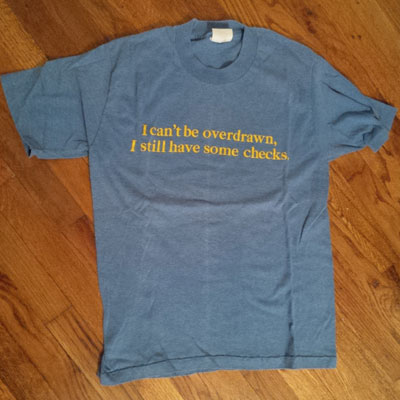 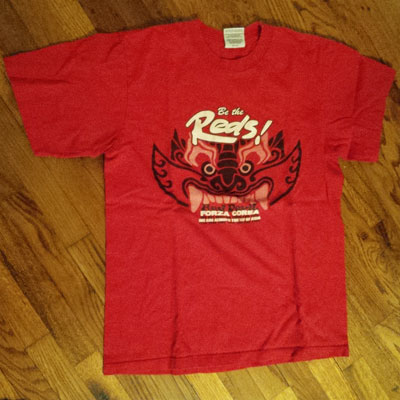 My first two years in Los Angeles, I lived in Koreatown. It was basically the only place I could afford with no job (or job prospects). I was there in summer 2002, which was the World Cup in South Korea — and it basically shut down Koreatown. Even though the games were in the middle of the night, you couldn’t have slept anyway — the screaming and honking during South Korea’s games was insane. (Especially during South Korea’s game against the U.S. They ended up playing to a 1-1 draw.)

I could see how much it meant to everyone and the day after watching that game at a bar with hundreds of my neighbors, so I decided as a memento of my time in Koreatown, I’d buy one of their t-shirts. During that World Cup, the phrase “Be the Reds!” became the Korean team’s rallying cry and these t-shirts were everywhere. I got this one from a guy on the street and wore it as Korea did remarkably well through the rest of the tournament. (They ended up losing in the semifinals to Germany.) 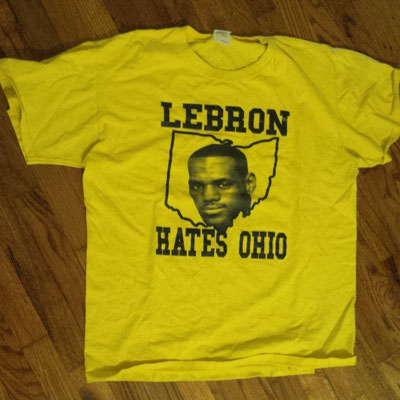 My friend Adam bought me this when the “F— LeBron” groundswell was still molten. He got it in Ann Arbor, Michigan and technically, it’s supposed to be a pro-Michigan, anti-Ohio shirt. But I choose not to see it that way. To me, it’s making a profound and accurate statement on LeBron’s character and sums his entire farcical exit up so perfectly. 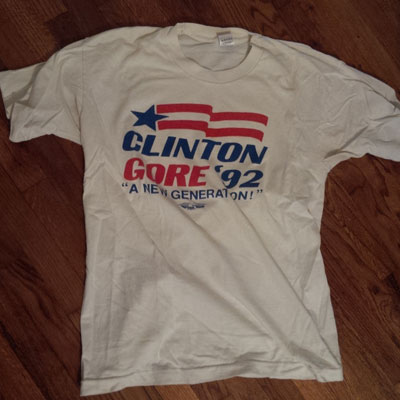 Generally I don’t love white t-shirts, but I made an exception for this one. When I found it, it was in mint condition — i.e. no pit stains — and it instantly took me back to 1992. That’s the first election where I was really paying attention (I have some memories of Bush-Dukakis in ’88 but not many) and I loved Clinton. What a character THAT guy was, huh? 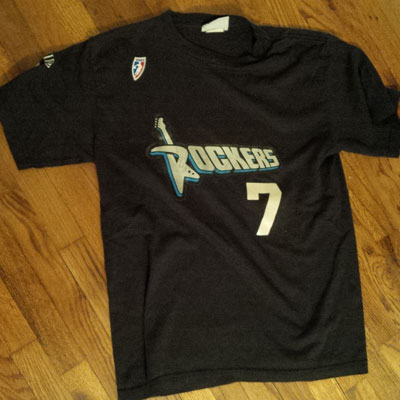 It’s clear I have a lot of Cleveland sports t-shirts — besides the others on this list, you can also see at least two or three visible in the wide shot. There are at least a few dozen even beyond those. But this one is unique. It’s from Cleveland’s very short-lived WNBA team; actually one of the eight charter teams in the league. The Rockers folded in 2003, and this is the one and only Cleveland Rockers t-shirt I ever spotted in my go-to Cleveland thrift store. As a guy who once wrote a list defending the WNBA, I’m glad that I own (probably) the last remaining Cleveland Rockers t-shirt in the world. 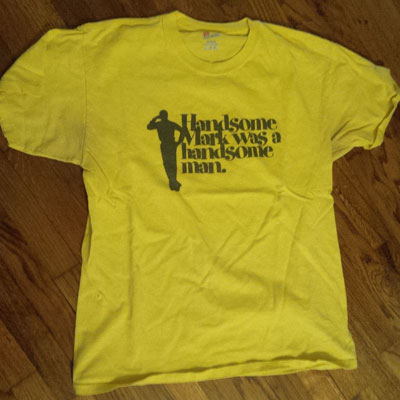 This is the only t-shirt on the list that I made myself. About 10 years ago, my friend Gabe was a teacher and we became friends with all of his fellow early 20s teachers. One of them was named Mark and for whatever reason (no one can even hope to remember), we started calling him Handsome Mark. Another of our friends, Jeremy, wrote a song about the legend of Handsome Mark one night. It featured the lyrics “Handsome Mark was a handsome man.” This was right around when Cafepress first offered non-white t-shirts, so we decided to get neon yellow t-shirts in honor of the song. And I believe all of us still have them — they were that good. 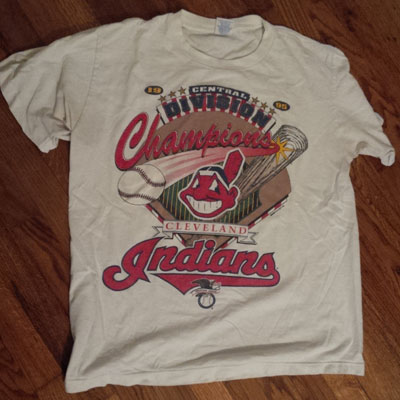 I bought this shirt the day after the Indians clinched the Central Division in 1995 and I’ve held onto it ever since. I was working at a sporting goods store at the time (I was, quite possibly, one of the worst retail employees in the history of history) and manned the Indians Central Division merchandise table all night long. The stuff was flying out of there — it had been SO long since the Indians were good and they were really, really good that year — but I hid one shirt in my size in the back so I could buy it at the end of the night. I don’t remember if I got an employee discount. If so, they really shouldn’t have given me one. They paid me then-minimum wage ($4.25/hour!) and I think they were getting the worse end of that deal. 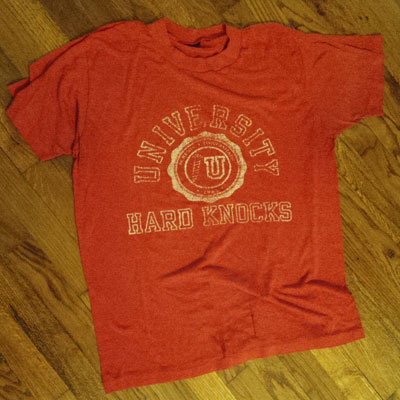 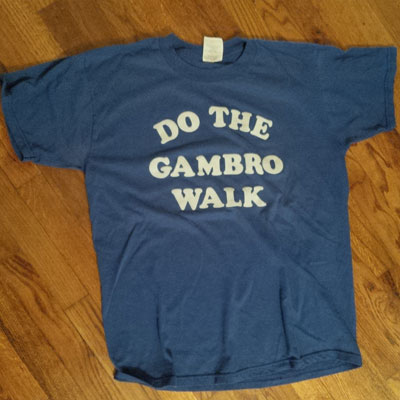 Everything about this shirt is perfect, making it the #1 shirt in my collection. It’s my favorite shade of blue, the letters are ironed on and in that classic iron-on letter font, it fits me perfectly — and no one knows what it means. I’ve had at least a dozen friends try to prove they could figure it out — but there has never been any record of a Gambro walk on Google. The best guess is it has to do with a healthcare provider, but no one knows. Over the years, I’ve saved it for very special occasions — I wore this t-shirt to both my 10-year high school reunion and the welcome party to my wedding. If you invite me to YOUR wedding, I will happily wear it there as well.