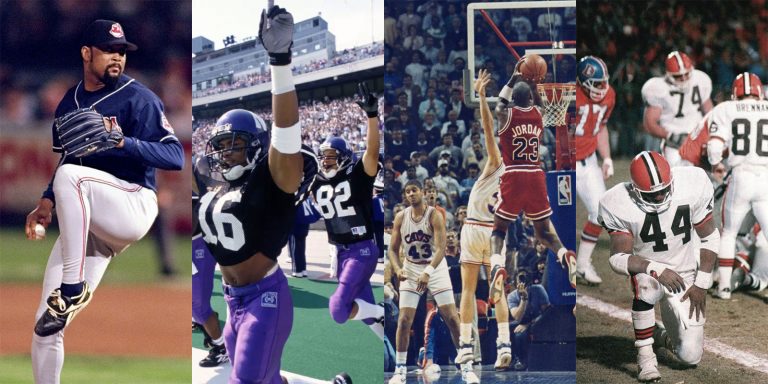 I’m a fan of some mediocre teams, mainly from one snake-bitten city and one non-sports-oriented college. Here’s my personal power ranking based on how much I want them to win a championship.

Not a single sports team I’ve ever had a rooting interest in has ever won a championship. (2018 Sam says: Mercifully, this soul-crushing fact is no longer true.)

Unless you count the first Chicago Bulls championship when I was in 6th grade, before I realized that being from Cleveland meant you had to respect Cleveland teams, or you were a front-running sellout. (2018 Sam says: This was so true. In 6th grade, everyone in my school went Bulls crazy. Then a few of us quickly pivoted, as capricious middle schoolers do, and began judging our classmates for not loving their hometown teams.)

So I figure I’m MORE than due. But not all championships are created equal, so I thought this would be a good forum to spout off about which teams I want to see win the most. So this is that list, in order.

And I’m not just saying that because it’s baseball season right now. This is my family’s team. This is the true Cleveland team (more so than the Cavs or the new Browns). And there is nothing that compares to the baseball playoffs. The intensity, the swings, everything… this is the ring I want more than any other. (2018 Sam says: This still holds true. And the Indians have come so close exactly once in the decade since this post was written, when they lost to the Cubs in extra innings of Game 7 of the 2016 World Series. But maybe this year…?)

The odds of Northwestern winning a football national championship in my lifetime have got to be somewhere around three or four million-to-one. But if they did, that fall and winter would be the greatest of me and my friends’ lives. When I was a senior at Northwestern and they went 8-3 (before getting shellacked in their bowl game), it was the best time anyone ever had on campus. (2018 Sam says: As much as Northwestern football has admirably established itself as a solid middle-of-the-pack program over the decade, those three/four million-to-one odds still seem about right.)

My formative sports fan years happened during the peak of the NBA. And, unlike almost everyone else from my generation, for some reason, I didn’t abandon the professional basketball bandwagon during the years when Grant Hill was the biggest star in the league. I watch a lot of Cavs games, always have. The Cavs’ playoff run last year was incredible. So if they win, I feel like I’ll really, personally, be excited. (2018 Sam says: And when the Cavs finally ended the Cleveland sports curse in 2016, I *was* extraordinarily excited. I even wrote an ode to the life-affirming nature of the victory. That being said, I was also super catty when LeBron left the Cavs in 2010.)

I really like pro football. But unlike most Clevelanders, I still can’t get over the fact that these aren’t the real Browns. This is an expansion team that paid a few million dollars to buy a franchise’s history. So if they win, it’ll be great for Cleveland and I’ll be excited, definitely. But, in truth, it’s an expansion team. And, most of the time, they play like one. (2018 Sam says: It’s a good thing I don’t live or die by the Browns, because they… um… haven’t exactly turned things around in the time since I wrote this.)

Somehow, there are even worse odds of this happening than the Northwestern football one. I have no idea how a Big Ten school can have a basketball team that’s never even accidentally found its way into the NCAA tournament. Seriously. Zero tourney appearances ever. In history. Northwestern State has made the tournament. It’s mind boggling. (2018 Sam says: Northwestern finally made the tourney in 2017 and I went to Salt Lake City to watch their game. They even won in the first round. I’d say that was more or less the program’s equivalent of winning a championship.)

When I was in middle school, when the Pacers would come to Cleveland, they’d work out at the Jewish Community Center (JCC). This is big for me, since most of the highlights of my basketball career happened on the floor of that JCC. (My basketball skills tend to match up best against other Jews.) So, back then, I got to meet the Pacers, talk with them, all that. And it stuck with me. (2018 Sam says: I don’t really dig the Pacers anymore. I would if Reggie Miller, Rik Smits, Dale Davis, and the rest suited up again — but that seems unlikely.)

I was such a sucker for the Dream Team back in 1992. I even had the shirt with caricatures of all of them. Good to see Chris Mullin on there, by the way. During the Olympics, I’d like to see them do well again. European-style basketball has really started pissing me off. Who cares if you can pass and shoot? Fast break dunks, endless dribbling and over-committing off your man for flashy steals — THAT’S basketball. (2018 Sam says: Meh. The excitement of seeing superstars play together for Olympic basketball has gotten way less fun as the NBA evolved into a handful of permanent all-star teams.)

During the last World Cup, I found myself not only watching the games… but actually really cheering for the U.S. Trust me, no one is more shocked by that than I am. (2018 Sam says: I do enjoy soccer once every four years. Assuming the U.S. makes it, which, notably, they did NOT this year.)

I went to a tiny high school in suburban Cleveland that was 85% Jewish… and a public school. We were decent at golf and model United Nations. Not so much (real) sports. Of all the teams on this list of 11, this one actually has the longest odds. And that’s saying something. (2018 Sam says: We were also really good at winning awards with our newspaper. And unlike gold and model U.N., I actually DID newspaper. Why didn’t I mention that?)

For a brief period back in 2003, I lived in Gabe’s living room in Playa del Rey, California. Playa del Rey is one of the most obscure communities in the greater L.A. area, right up there with Mar Vista, Palms and Sun Valley. There was a high school walking distance from Gabe’s house called St. Bernard. And one Friday night, we decided to walk to one of their games.

They weren’t particularly good… in fact, they were sort of the opposite. But they had an awesome Viking mascot with an oversized head and a band that played the music from World 1-2 in Super Mario Bros. And if that doesn’t make you a fan, then nothing will. (2018 Sam says: I don’t believe I’ve been to a St. Bernard game since this was written, even though I live like 15 minutes away — which is basically “next door” in L.A. terms.)

(2018 Sam says: Since this list came out, I’ve subsequently met my wife and joined her (and her friends) to watch enough Western Michigan Broncos football games that I’ve become a fan of them as well. I’m not banking on them to win a national championship either, but hey, it’s one more long shot iron in the fire. I’ve also managed to continue resisting becoming a fan of any of the L.A. sports teams, despite now living here just about as long as I lived in Cleveland. And finally, in spite of the Cavs winning a championship, I’m still plenty thirsty for more.)