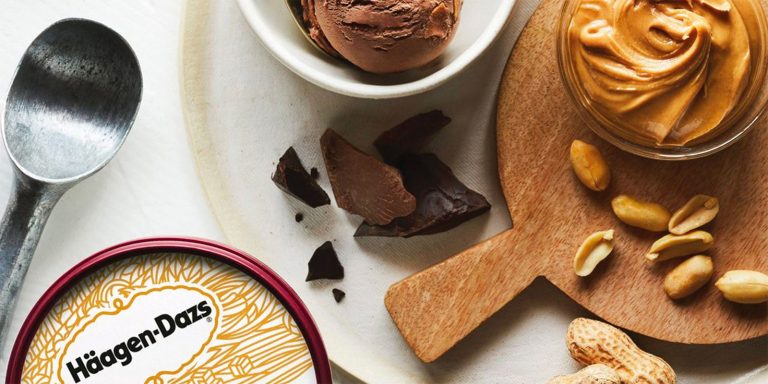 From the French dip to chimichangas to German chocolate to vichyssoise, just because they sound foreign doesn’t mean they are foreign.

I saw Iron Man 3 on Monday night. Really enjoyed it. At one point, Ben Kingsley’s character goes on a rant about how the fortune cookie was actually invented in the U.S. And it was — in California.

That sent me digging around for some other foods with foreign and ethnic names that were actually created here in America. There are a ton (including pretty much everything we call Chinese food, and the term Chinese food itself); here are 11 of my favorites…

This is possibly the most famous example of a brand using a foreign-sounding name to increase its prestige and retail price. Haagen-Dazs was founded by a couple from the Bronx. The name was meant to sound Germoswedifinlaustrian but doesn’t mean anything. Kind of like (I suspect) half the furniture at IKEA and five-sixths of the sounds coming out of the Swedish Chef. And the foreign branding worked; Haagen-Dazs remains an expensive premium ice cream brand. Bronx Cold Food wouldn’t have had the same appeal.

This soup was invented by a French chef at the Ritz-Carlton in New York. He named it after a French town called Vichy, near where he grew up. Deep down, we should’ve known that a potato, cream and chicken soup felt more American than anything else.

The sandwich is named for the French roll, not for the country of France. It was invented in Los Angeles in 1908, but there’s a never-ending Hatfield-McCoy war over its birthplace. A restaurant called Philippe’s claims it was the birthplace, when the owner gave a customer a bowl of (au) jus to moisten up a stale sandwich. Another restaurant called Cole’s Pacific Electric Buffet claims it was the birthplace, when police officers asked for some gravy to dunk their roast beef sandwiches. If I know Los Angeles, the city will be willing to spend millions to get to the bottom of this.

It’s deep fried, sweet and spicy… and no one in China has heard of it. It was invented in New York, sometime in the 1970s. Other Chinese food dishes that were made in America include cashew chicken, crab rangoon, orange chicken, the Chinese chicken salad, chow mein, (probably) chop suey, eggless egg rolls, and the carrot cake and German chocolate dessert shooters at P.F. Chang’s.

Speaking of German chocolate, it has nothing to do with Germany — aka the Land of Chocolate. (Cue montage.) German chocolate is really German‘s chocolate; it was invented by an American named Sam German. In 1852, he created the dark chocolate that’s used in German chocolate cake and as a color palette selection for Leon “The Ladies Man” Phelps’s suits.

Like a lot of the foods on this list, there’s some dispute over who created it. But everyone agrees on one thing here: The chimichanga was invented when an American dropped a burrito into a deep fryer. (Honestly, most of the culinary innovations in the past several decades in this country have seemingly happened when people dropped things into deep fryers. Also, it’s the only reason state fairs still exist.)

Swiss steak isn’t named for Switzerland, it’s named for the tenderizing process called swissing. The first swiss steak recipe was published in the U.S. in 1915. On this note, Swiss Miss is an American-made hot chocolate brand and Swizz Beats was born in the Bronx. (I wonder if he’d be a hot producer if his name was MC Haagen-Dazs?)

The English muffin was based on the crumpet, which is British. But the English muffins we know today were officially invented by Samuel Bath Thomas of New York in 1894. (Yes, that’s the “Thomas” of Thomas’s English Muffins.) His muffins were flatter than crumpets and split in half. If only he’d gone on to devote some energy to importing and tweaking other British foods like eel pie and spotted dick, who knows how different our diets could be today?

The Cuban sandwich as we know it today — ham, pork, cheese, pickles, mustard on Cuban bread — was founded in Tampa. It’s similar to a sandwich that people ate in Cuba, but the recipe was finalized as the cigar industry moved from Cuba to Tampa in the 1880s. You know what else was founded in Tampa? Outback Steakhouse. So let’s allow this to be the bloomin’ onion’s token mention on this list. It didn’t sound Australian enough to make the list, but didn’t… uh… not sound Australian enough not to at least warrant a mention.