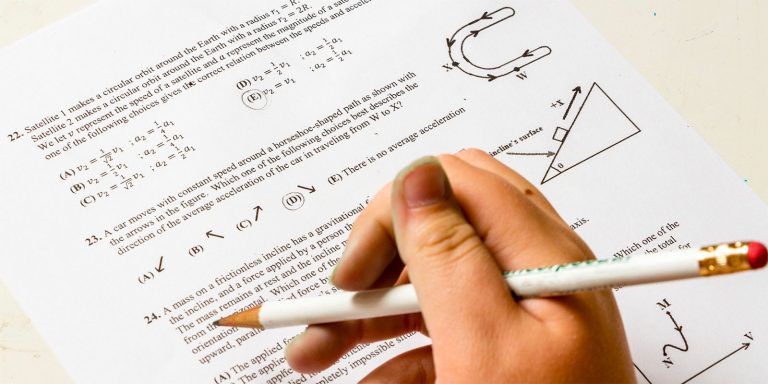 Kids have had some great answers to math and science questions — and those answers found their way onto the Internet.

I remember when I was in 6th grade, during a lesson on (I believe) colloids, my science teacher told us an anecdote. Once, as an extra credit question on a test on this subject matter, she’d asked, “Why does Jell-O jiggle?” As many students wrote long explanations, one simply wrote, “Because Mom makes it that way.” And she gave him the point.

Well, we just thought that was the most hilarious thing in the world. And clearly it had some staying power — damn near two decades later and I can still rattle it off.

I bring that up now because this list makes one thing clear: The outside-the-lines answers that kids give today have gotten much, much funnier.

I’ve been compiling funny math and science test questions, test answers, teacher’s notes, textbook errors and more for a while now… and finally found 11 that made me laugh out loud.

Some of these have been passed around the Internet forever… some are much more obscure… but, either way, they all have the same effect: They make you wish you could go back in time to your school days, and do a better job documenting your transcendentally-genius smart assery.

1 | It doesn’t matter if I’m right or wrong, just that I’m in charge 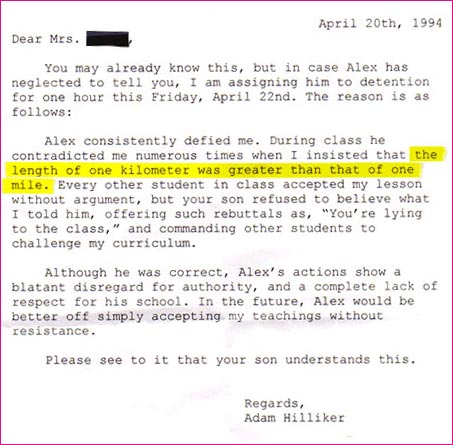 You know, I bet Copernicus’s teacher sent a similar note home. And in this teacher’s defense, he shouldn’t have to soil his tongue teaching the metric system. If you want to learn that nonsense, stay out of the United States! (And Burma and Liberia, too, for that matter.)

2 | That is a pretty good way to gauge gender

This should’ve been good for, at the very least, partial credit. Back when I interned at the Jerry Springer Show we occasionally had to use that very same deductive method on the guests.

What are the odds this math teacher got called into the dean’s office because he was “randomly” chosen as part of a new school program to do psych evaluations on a small sample of teachers? (And while he was in there, Richard Belzer and Ice-T checked for dead hookers and/or co-eds in his truck, freezer, public storage unit and secret dungeon you access through a hollowed-out wall in his closet?) 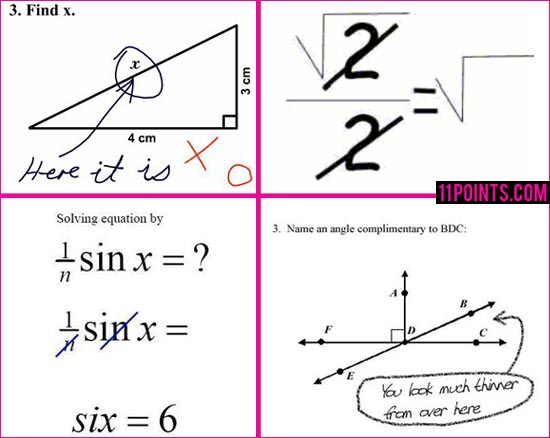 Four math answers that show why we’re falling so far behind the Chinese. You put an answer down like this in China and you get taken away for 16 years of forced drumming practice — you know, just in case they ever get another Olympics.

If only he’d given that explanation in a stats class and not whatever class involves titanium reductions. (It’s either chemistry or cooking.)

Momentarily putting aside the anti-Krukian nature of the answer… shouldn’t the teacher be upset that he used the word “shit” on a test? There’s absolutely nothing about this that constitutes a “nice try.” 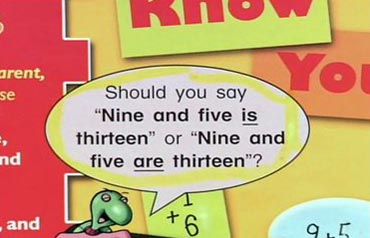 My answer would be: “Nine and five are upset that your count is short — if they were drug dealers they would kill you and shit.” (By saying “and shit” I’m hoping my answer would get a “nice try.”)

8 | And we could get a schedule for the two trains leaving different cities, too

But we still wouldn’t know the color of the conductor’s eyes.

9 | That really would get you fired

And, truthfully, having worked at several jobs now and seeing how unbelievably long it takes for terrible, sub-competent workers to get canned… sleeping with the boss’s wife is a much quicker path to unemployment than designing a faulty ocean liner because of a miscalculation.

10 | Elephant not drawn to scale 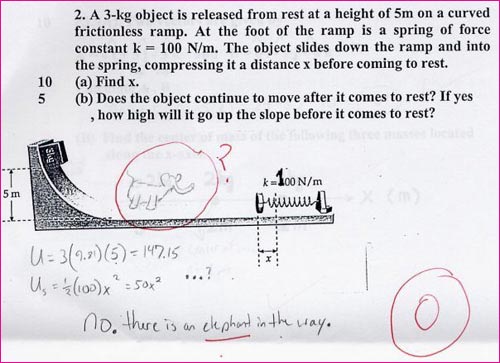 Hey, if this problem can occur in a world where frictionless surfaces exist, who’s to say that world doesn’t have miniature elephants wandering around everywhere? 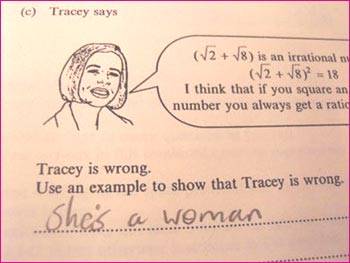 Equals the joke that just keeps on giving! (Only second to a joke that’s perfect for right now, as Chinese New Year parades rage on: “It’s the Year of the Tiger? Damn, I’ve got to stop writing ‘Ox’ on my checks.”