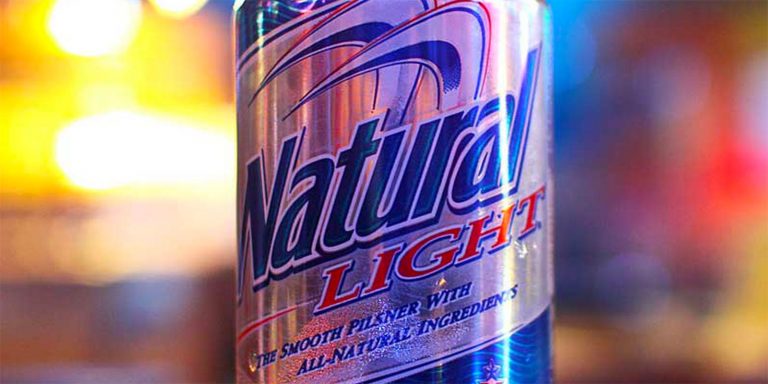 Natural Light is arguably the most famous American sub-bargain beer. But it has a surprisingly rich history.

Over the weekend, I was at the grocery store with my friend Adam, purchasing some stuff for the Super Bowl party at my house. When we got to the beer section, we were stopped in our tracks by an incredible sight: 30 packs of Natural Light for $12.49.

This was amazing to us. We know Natty Light is generally the cheapest beer available, but that particular price was as low as either of us could ever remember seeing.

We quickly cited our go-to litmus test for cheap beer prices — the price of a 30-pack of Busch Light our freshman year of college. The local liquor store sold them (to kids who were 21, not us, of course) for $9.99.

And here we were (almost, yikes) 13 years later, staring down a 30-pack of fairly comparable bottom-shelf Anheuser-Busch beer… and it was only $2.50 more. According to the government, inflation should’ve taken it up at least 10 percent higher than that — and that’s not taking into account purchasing it in the grotesquely overpriced southern California region versus the ever-so-slightly-less-grotesquely overpriced suburban Chicago region.

So I decided to devote (what turned out to be) four hours of my life to research on Natural Light — equipping me to give it the proper tribute that, somehow, no one else online or in print has ever done.

Here are 11 great trivia facts I discovered about Natural Light, the beer that America simultaneously mocks and adores.

And, yes, in our beer purchase, we did supplement our Super Bowl party buy with one 30-pack of Natty Light. Yes, we’re 30. No, we didn’t care. And, as I predicted in my list of the 11 Best Crappy Domestic Beers, once our guests had a few drinks in them, no one really minded the taste.

1 | Natty Light is the FIFTH-best selling beer in the U.S

According to this article from last August in the Wall Street Journal, Natty Light has skyrocketed into fifth place overall for American beers.

It’s behind only Bud Light, Bud Heavy, Coors Light and Miller Lite (and ahead of Corona, Busch Light, Busch, Heineken and Miller High Life). Yeah, they only list the top 10 best-selling beers in total cowardly fashion.

It’s so un-prestigious and so rarely discussed that I never would’ve guessed Natty Light was that popular. It’s the exact same way I felt when I found out NCIS was the number one show in the country.

Something else you can see in the chart: Of the top 10 (I shudder even writing that phrase) best-selling beers, Natty Light had the biggest growth between 2008 and 2009. That’s not a coincidence. When our world went to shit, so did our tolerance for that flavor of beer.

As my friends at Newser wrote last year, all of the “sub-premium” beers have flourished in the post-Bush, pre-Romney America — Miller High Life, Busch Light, Keystone Light, Pabst Blue Ribbon — with Natural Light leading the pack.

3 | Yes, there once was a Natty Regular (or Natural Heavy, if you will)

Everyone’s seen Natural Ice, the high-alcohol cousin to Natural Light. (I almost wrote that Natural Ice is “the black version” of Natural Light because of the color of the box and label, but, as a champion of calling out accidental racism, I will not get caught doing that.)

With those two variants in existence, it oft begs the question: Is there a Natural Regular, colloquially a Nat Heavy?

Turns out there was a Natural Not Light… but just briefly.

It only sold in Hawaii, Arizona, California, Nevada, Ohio, Tennessee and West Virginia and Texas. (And, dare I say, in choosing those states, A-B just straight up WHIFFED on putting it in several of the Nattiest regions of this country.)

This is a good trivia fact to use if you want to win a bar bet. (Do people still make bar bets?) Or if you’re using your Pick Up Artist tricks to try to seduce women and you peacock over to a few and say, “I’m taking a survey but answer quick, with those buck teeth of yours, ’cause I gotta get back to my friends. What was Anheuser-Busch’s first light beer?”

A-B introduced Natural Light in 1977… a full five years before Bud Light. It was a direct response to Miller Lite, which was introduced in 1973… and had started gaining a real market share.

Instead of going the Bud Light route, A-B decided to introduce a completely separate light brand… because they were reluctant to water down the Budweiser name. (Pun most certainly intended. On this website, the puns are ALWAYS intended. Puns are the highest form of comedy. One step above mime, and 45 billion steps above improv.)

It took five more years before they realized that the light beer market was the future, and making a Bud Light would actually help, not hurt, their brand.

It’s kinda like how Neve Campbell refused to get naked for Wild Things because she thought it would hurt her career, so she let Denise Richards have all the (female) nudity… but then Neve’s career started going badly and Denise’s started going better. So, several years later, Neve caved and started getting nude for movies which helped rebuild her cred, while Denise ended up on a reality show and went back to being a cheaper alternative.

In my list of the 11 Best Beers To Get You Drunk But Not Make You Fat, our research found that Natural Light had the third-best ratio of calories to ounce of alcohol. Behind only Beck’s Light (although there was a TON of debate in the comments about whether I had gotten the numbers wrong on that and, quite frankly, I probably did) and Beast Light. With 95 calories per can and 4.2 percent alcohol, it has an outstanding ratio of 188.5 calories per ounce of alcohol.

Natural Light didn’t chart on my list of the 11 Cheapest Ways To Get Super, Super Drunk — I mean, how could it compete with boxed wine, grain alcohol and Mad Dog — but, when I plugged in the math at $12.49 for a 30 pack, it came out a very impressive 17th overall (just behind Colt 45 and just ahead of PBR) at $2.48 for three ounces of alcohol. That makes it the highest-ranked light beer.

In other words: If price is a big issue for you AND you want to drink beer and only get kinda fat (not super duper mega fat), Natural Light is your best possible option.

You might remember the scandal from 2003 when Eustachy was photographed at an undergrad party drinking and kissing a variety of comely Iowan co-eds.

Just three years after leading Iowa State to the Elite Eight, those photos led to him being was forced out of his job. He played the addiction card (alcoholism, in this case, not addiction to corn-fed co-eds)… and was hired to coach at the University of Southern Mississippi.

Anyway, more importantly — the photos from the undergrad party show him getting all messed up on Natty Light.

When in Rome, right?

Seriously. After Natty Light was introduced to the market, Miller filed a complaint with the Federal Trade Commission and claimed Anheuser-Busch was using deceptive packaging and advertising to sell the beer — because there was absolutely nothing “natural” about it.

A-B claimed that was just retaliation; Miller was mad because, a few years earlier, A-B filed an FTC complaint that Miller’s Lowenbrau was deceiving people into thinking they were drinking a fancy German import when really it was just the same old American crap.

The FTC rejected both complaints.

This one should have you nice and confused. At the 2008 World Beer Cup… which, apparently, is the Oscars of the beer world… Natural Light won an award for its delicious taste.

In the category of “American-Style Light Lager,” Natty Light placed third, behind Old Milwaukee Light and Lone Star Light. It beat out 31 other beers (including all of the bigger, more popular mass-produced light beers).

I could not find any explanation nor comments from the judges on what separated Natty Light from the field, but I’ve got to think this is just a monumental upset. It would be like Avatar losing the Best Picture Oscar to Who Dat Ninja or Fat Bitch (She’s Off the Leash!)

9 | Until 2009, Anheuser-Busch only devoted 0.015 percent of its advertising budget to Natty Light

A-B has an enormous marketing budget. They spend $455 million on advertising. It’s what pays for all of those brilliant Bud and Bud Light Super Bowl commercials, ya know, like the one on Sunday where the guy did the thing or the other one where an animal did a different thing. (Yep. I’ve forgotten their commercials already. But that violin-playing beaver still haunts my dreams.)

But last year, as Natty Light accounted for nine percent of A-B’s sales, it finally got a raise. For the first time in 25 years, Natty Light got a TV campaign. All those Nattyisms commercials — those only happened because of the beer’s newfound growth.

In 2009, A-B spent somewhere between $2 and $2.5 million marketing Natty Light — still a fraction of their overall ad budget, but a gigantic increase nonetheless.

So, as I said in the previous point, it’s been 25 years since a Natty Light TV ad campaign. What happened 25 years earlier?

Well… in the late ’70s and early ’80s, Anheuser-Busch actually tried to put some celebrity muscle into promoting Natty Light. First they ran ads with such luminaries as Norm Crosby and Ray Jay Johnson (whom my generation knows exclusively from mentions on The Simpsons, by the way).

Those didn’t work, so they ran ads featuring Mickey Mantle — who, at that point, was still alive and whose number hadn’t yet been turned into a baby name by George Costanza.

When those didn’t catch on, they went the sex route, and ran ads featuring Christie Brinkley — who, at that point, was America’s fantasy woman via the Sports Illustrated swimsuit issue and Vacation. Kinda like today’s… oh, I don’t know, who do the kids like these days? The pale chick from Twilight? Leighton Meester? Megan Fox (when she’s not talking)?

When even the celebrity sex ads didn’t work, A-B stopped putting any advertising money behind Natty Light — it was going to have to sink or swim on its taste. And a mere two-and-a-half decades later… it kinda did.

I saved this for last because it’s my exclusive. During my search I went down a tangent to see if Anheuser-Busch embraces or dislikes the term Natty Light (they like it… they’re even using it in promotional materials).

In the process, I found that A-B owns the domain name nattylight.com. I decided to type in a few other related domain names, just on a hunch they might own them. And there was one incredible diamond I found: Anheuser-Busch is the proud owner of the domain name NaturalLightSucks.com.

And you can say they just registered it so no one else could, to prevent a potential anti-Natty Light website from having it or to protect the brand. But I am choosing to take it at face value. We know it, and this is proof that they know it: Natural Light sucks. And yet, in spite of that suckiness… or, perhaps, on some level, because of it… we all adore it.