I recently saw an article about a “grammar vigilante” in the U.K. This person goes around in the middle of the night fixing grammar, punctuation and usage errors on signs. (Think: A sign with a misplaced apostrophe or comically misused quotation marks.)

Well… you know that moment in 53 percent of superhero movies where you see people trying to emulate the superhero, dressing up, trying to fight crime, not quite achieving the standard of the primary superhero and sometimes getting in way too deep? That’s this list. 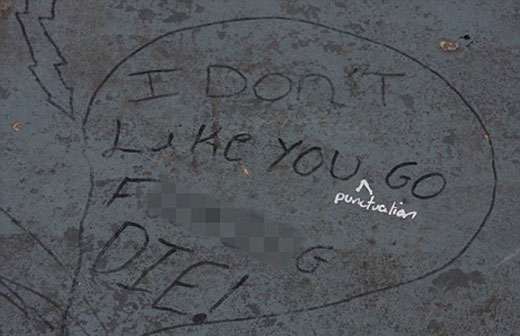 Rather than just adding the necessary period or semicolon, the choice to just write “punctuation” is an extra little dig. It’s like, “I’m not going to do your homework for you.” 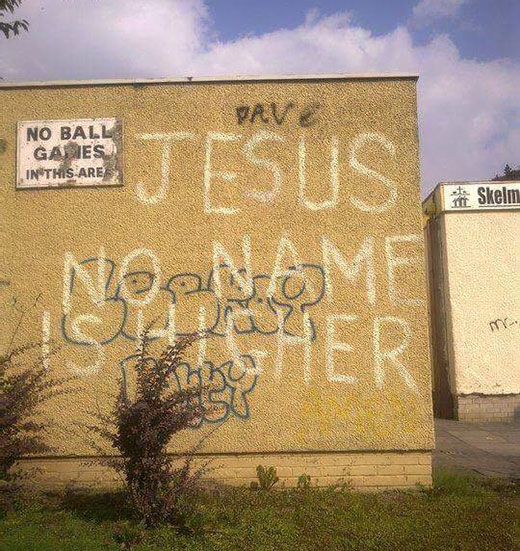 This is my favorite of the list. I’ve never written any graffiti, but if I were ever going to, I would want to do what Dave did. Or perhaps I would’ve ignored that and just added a “Jenkins” on the bottom of the wall.

3 | Hailey and Kayla are Cooler Then You 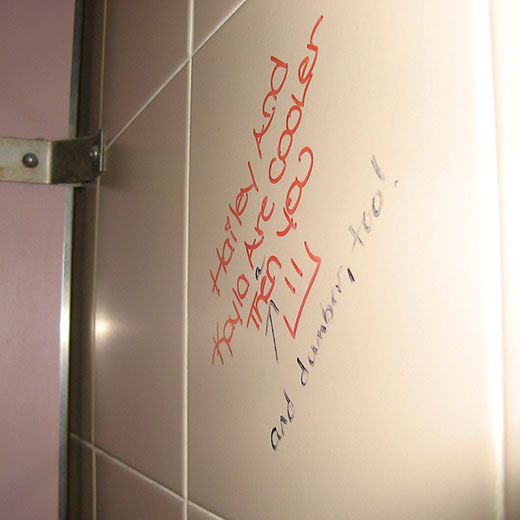 I have to imagine the second graffit-ier here really put a lot of thought into the usage of the comma in “and dumber, too!” I’ve been there. Whenever I write anything on this site mocking poor grammar/usage I try to be extra careful about my own. And, invariably, I make a glaring mistake. 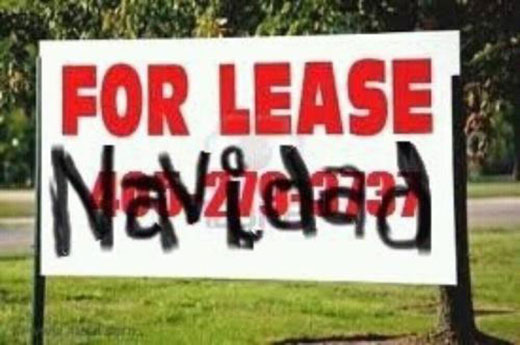 Wordplay isn’t really pedantry, although they’re at least cousins. But sort of like cousins who aren’t technically related but their parents were close friends and they spent a lot of time together growing up. 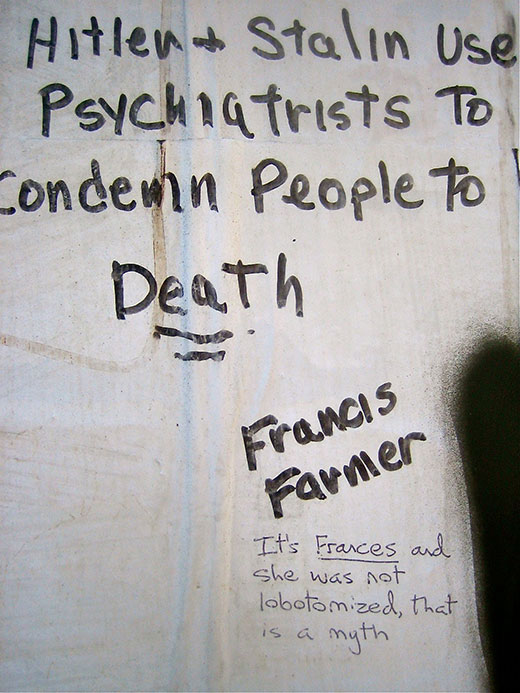 These two pieces of graffiti — the original and the correction — go on quite a twisting journey. (I had to look up the Frances Farmer story, as I was completely unfamiliar, and I’m still not entirely sure how this scribble got from Point A to Point B.) Couldn’t the second person just have kept things simple by inserting a period after “death” and just walking away? 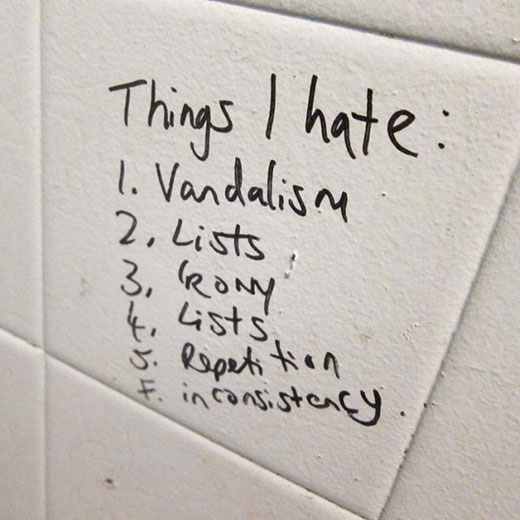 So the joke is “There are two things I hate: Vandalism and lists.” Well, not really. The joke is “Vandalism and [anything genuinely and widely hated].” But the whole thing really got away from this guy and he just kept on going and going. If I were going to add my own pedantic graffiti here, I’d add, “Brevity is the soul of wit.” 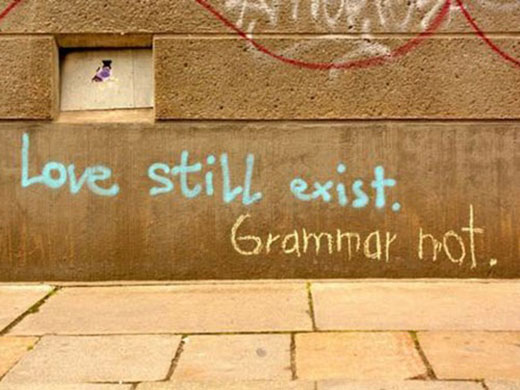 That’s a pretty good response by the second person, although it probably would’ve been a more positive contribution to society to just add an “s” to “exist.” 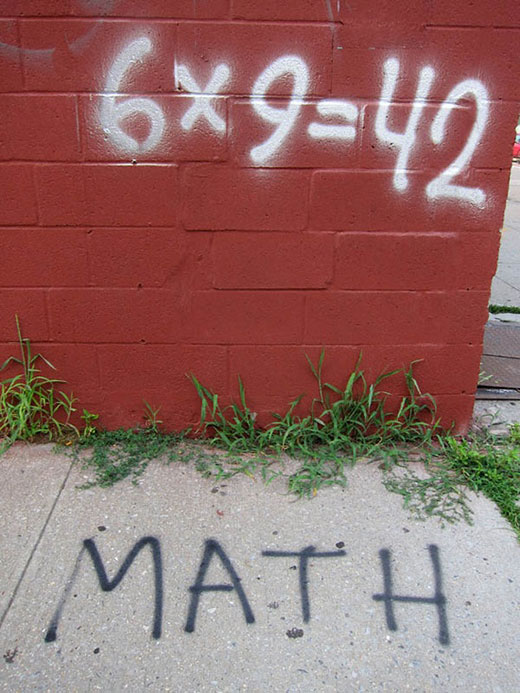 This is quite a clash of nerdiness, if I’m properly reading the situation. The person who did “6×9=42” is probably not terrible at basic multiplication but, rather, is referencing Hitchhiker’s Guide to the Galaxy, where it is revealed that the answer to “life, the universe and everything” is 42.

But the person who wrote “MATH” wasn’t aware of that. So he or she just went with pure sarcasm, not writing “54” but rather the much more vicious “MATH.” In a way, both of the people behind this graffiti exchange are simultaneously right and wrong. 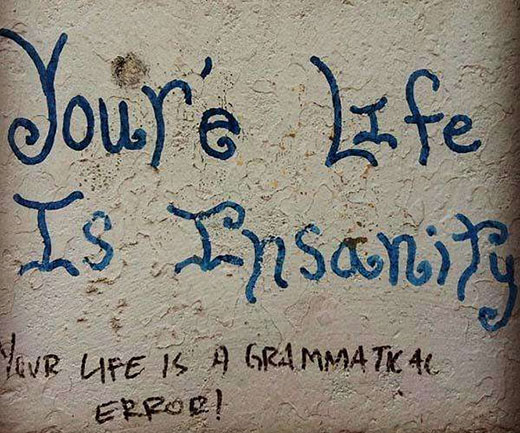 It’s against Internet Law to feature this many photos of bad English without one your/you’re switch. But this one is specially good, because it features the exceedingly rare your/your’e switch. 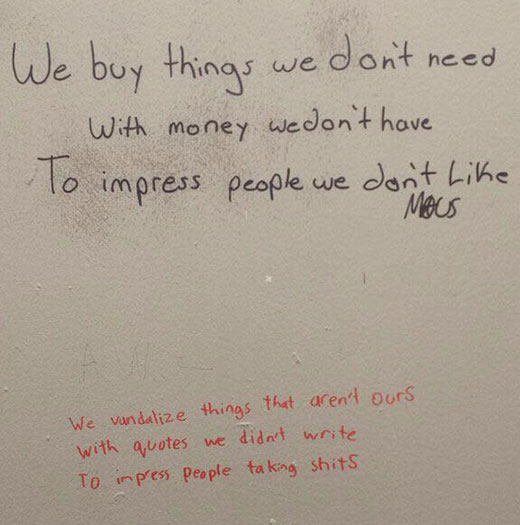 Bathroom stalls really aren’t the venue for generic quotes — that’s what Facebook is for — so it’s completely fair to be called out. 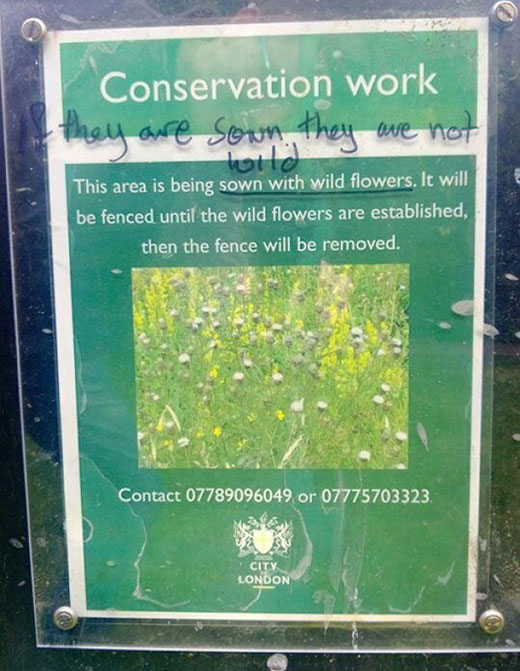 It takes a special kind of passion to get so worked up over the perceived paradox of sowing wild flowers that you pull out a marker and get to work. Like, the person who wrote the correction here probably hasn’t vandalized anything before and won’t vandalize anything again. But this — THIS — was just too egregious to ignore. The fact that helpful vandalism is, in and of itself, a paradox, apparently didn’t factor in.

And finally, what do these ladies think of graffiti, pedantic or otherwise? 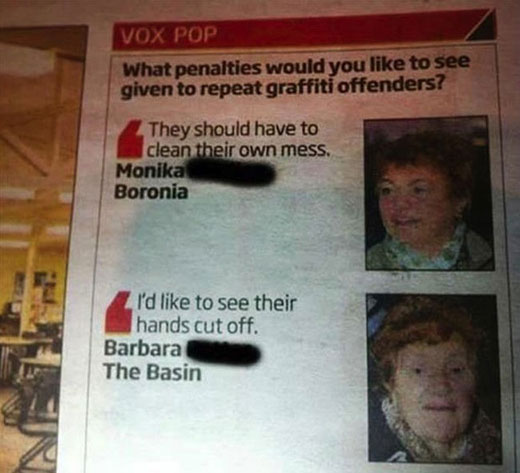