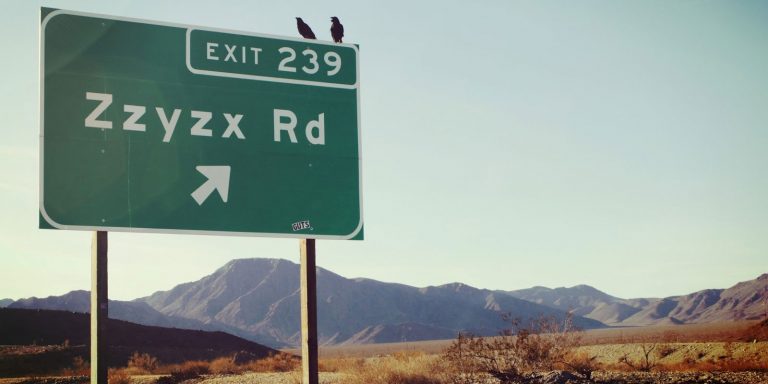 The famous drive from L.A. to Vegas has some signature moments, all worth cataloging.

I was in Las Vegas for Labor Day weekend for the World Adult Kickball Association world championships. (Obviously. Why else would a 29-year-old go to Vegas besides to play kickball?)

(Also, our team wasn’t all that good, most of our wins were smoke and mirrors, but we managed to smoke and mirror our way to a 2-1 record in the tournament. Which was pretty damn good, all things considered.)

We decided to drive to Vegas for the weekend, a drive I have done many, many times in my 7+ years in L.A. And as we were going (and then returning home through hours and hours of traffic on Monday), I realized that this drive has barely changed at all since 2001. I’m still seeing the same sights, the same ridiculous landmarks are still making me laugh… Vegas had completely exploded in that time frame, but the drive there is the same as it ever was.

Here are my 11 persistent highlights of the road trip, basically in geographical order from Los Angeles to Las Vegas Check it out…

Once you live in L.A. for a while, you realize that San Dimas is a real place. The first time you make this drive, though, you are giddy and shocked to see the city from Bill and Ted’s Excellent Adventure.

Every time I make the drive, it’s guaranteed that someone in the car will note that San Dimas High School football rules. And someone else will ask if we can stop at Waterloo (which is actually modeled after a real water park in the area, called Raging Waters).

Fortunately, on the list of jokes that never get old, references to those two parts of Bill and Ted’s are still totally cool.

Getting to Interstate 15, which is the hypotenuse from Southern California to Las Vegas, can be an adventure. You have to take the 10 through downtown L.A. and then several east suburbs and, because it’s L.A., there are plenty of times of the day when that portion of the drive is just offensively trafficky.

So when you finally clear the 10 and get onto the 15, there’s a huge sense of elation and relief… the grind of the Los Angeles portion of the drive is done, now it’s a straight shot to Vegas.

This may not be as universal of a highlight as the other things on this list… it’s fairly specific to me and my group of friends… but it deserves to get some publicity, so I’m putting it on the list. Stopping at an In-N-Out is an indispensable part of any trip to Vegas, and years of calculations have led us to believe the In-N-Out in Hesperia, California, is the ideal one to stop at.

It’s off the 15, so you deserve it after making it through Los Angeles. It’s relatively soon after the 10/15 switch, so it really drives the first part of the trip. And since it’s something of an early stop, it times things out perfectly so, by the time you hit Baker, California, everyone is ready for the bathroom/get gas/get a snack.

Also, the Hesperia In-N-Out is pretty large, so it doesn’t usually have the unbearable line or wait of an In-N-Out in L.A. proper, or the one that everyone stops at when they’re driving L.A. to the Bay Area.

I hate the agricultural inspection. For those unfamiliar, when you’re driving from Vegas to L.A., right before you hit Barstow (which is about the halfway point), you have to drive through an agricultural inspection. It looks like a toll booth and, in theory, I guess it’s there to make sure you’re not smuggling oranges or something into California.

Everyone loathes it for two reasons. One, it’s guaranteed to slow traffic down. Sometimes for miles in advance of it.

And on the surface, that wouldn’t be the biggest problem… as a proud Californian, I don’t want anyone smuggling inferior Nevada oranges into my state. BUT… there’s never anyone at the station. Usually there’s just a sign that says “No inspection today.” Or if there is an inspection, the people never stop anyone, they just look at you and wave you through.

In other words, they’re stopping traffic for absolutely no reason than stopping traffic’s sake. And that is just NOT acceptable to do to a nonstop stream of hung over drivers.

There’s a waterslide park somewhere in the middle of the desert. I don’t know where exactly, because I am working on a theory that it’s just a mirage, so its location frequently changes.No one has been able to dispel said theory because, while everyone who’s ever made the drive has considered it, no one’s actually ever stopped there.

I am a huge sucker for “World’s Largest” tourist traps. So I’m so glad there’s such an awesome one on this drive. As you enter Baker, you see the world’s largest thermometer.

The thermometer is 134 feet high — which, I just learned, is in honor of being near Death Valley which hit a world-record 134 degrees almost 100 years ago.

There have been points where I’ve gotten out of the car in Baker, just past the thermometer, and it must’ve been close to that. Like, to the point where it was actually difficult to walk because the heat and humidity were making the air feel legitimately thick.

Also, on my first trip ever to Vegas, we passed this thermometer at approximately four in the morning… and it told us it was more than 100 degrees outside. Now that’s crazy.

It’s such a cool sign to see, even if there is really nothing to Zzyzx Road.

It’s sad that its name got dragged through the mud, since the eponymous film (well, basically, although they misspelled the name Zyzzyx Road) is known as (1) the movie where Tom Sizemore finally lost his mind and (2) the lowest-grossing film in U.S. box office history.

So you’ve been driving for more than three hours. It’s getting late. You’ve burned through a lot of music. Someone in the backseat has fallen asleep. It’s just like that scene in Swingers when they’re driving to Vegas and, after being initially hyped to the gills, it’s clear they’re completely out of momentum. And then you see it. Primm.

Just across the Nevada border. A billion lightbulbs. It’s not Vegas… you know that. But it lets you know that you’re in the homestretch. And you’re in Nevada, where, apparently, electric bills are meaningless.

If the waterslide park I talked about before is a mirage, than Primm is an oasis. A rejuvenating, revitalizing oasis. And seeing it can border on a religious experience for road-weary travelers.
(Man I hope this makes its way to the Primm tourism bureau and they give me a free weekend stay at Whiskey Pete’s. With free admission to see whomever’s playing there that weekend, whether it’s Seals and Croft, three-fifths of Boston or Gerrardo.)

There’s a pretty cool roller coaster in Primm. I’ve never been on it (hate to stop the momentum that comes from finally reaching the Nevada border)… but after doing research on it for this list, now I really, really want to.

If you look at the coaster from the road, you’d never realize it, but, turns out, just 12 years ago, the roller coaster was the tallest one in the world. I mean… that’s impressive for Primm. And I bet there’s not much of a line (like at roller coasters at actual amusement parks) because you have to pay to ride.

The only problem? My roommates Gabe and Paul have ridden it and described the ride as “frighteningly bumpy… [like] it might break at any second.”

Jean is in a tough spot. It doesn’t have the allure of Primm because it’s not the first casino town you pass once you cross the border. And most people aren’t going to stop at Jean when they could just press on another few dozen miles and be in Vegas.

So the people behind the Jean casino industry came up with what (apparently they believed) was their one and only potentially effective marketing hook: “We comp gas.” Seriously. Every single billboard for casinos in Jean talks about comped gas.

And while, sure, gas is expensive… is the allure of potentially getting $60 worth of it strong enough to keep people from just driving on to the infinitely better casinos in Vegas?

(That’s rhetorical, because the answer is no. Earlier this year, one of the two Jean casinos, Nevada Landing, closed down because of a lack of business. How often in this day and age do we hear about casinos shutting down? Every Vegas one is currently building an extra tower because business is so good that they need thousands and thousands more rooms.)

As strong of a motivator as Primm is, nothing on the drive compares to the Luxor light. When you see the strong beam of light coming out of the top of the Luxor pyramid, shooting into the sky, you know you’re about to finally hit Vegas.

It’s amazing because you can see it far, far, far away. It’s the first visible sign of Vegas, as well as a perfect metaphor for the waste and excess you’re about to immerse yourself in and celebrate.

Shortly after you see the light, you just round one turn and you can finally see the entire city. Which means you’re less than 20 minutes from aimlessly circling a parking garage, 35 minutes from standing in line to check in, and 35 minutes and 15 seconds away from seeing your first hill-folk couple with matching tattoos.

Vegas Casinos Are Now Charging For Parking, and the Deeper Implications Scare Me