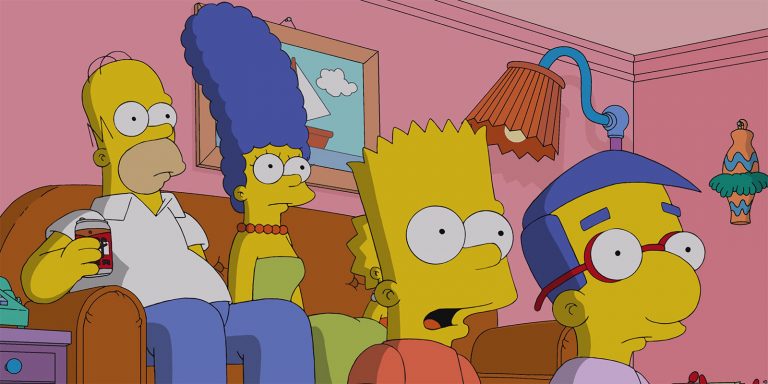 The signs on the Simpsons are always next-level jokes.

This is not a comprehensive list of the best signs ever seen on The Simpsons.

Because I don’t think that it would be possible to put together the 11 greatest signs on The Simpsons. Every single episode features at least three or four signs and, without fail, they’re clever. Business names, business slogans, messages on the church sign… for 20 years now, the writers have almost never missed.

So what I set out to do was put together a list of 11 signs featured on The Simpsons that I find to be exceptionally brilliant. And I know I left out some great ones. I had to. So with apologizes to Stoner’s Pot Palace, Flowers By Irene, no outside Eucharist and so many more, here are 11 ingenious signs on The Simpsons…

1 | Jolly Gummibears – “They Hibernate in Your Colon” 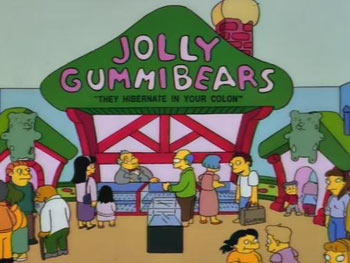 From the episode where Homer’s accused of sexual harassment — but, more importantly, the episode with the candy convention, one of the greatest segments ever. 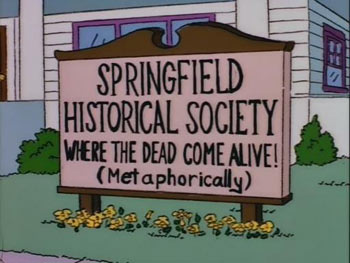 I guess they needed to clear up that it’s not the home of Jebediah Springfield’s zombie corpse. Because no matter how embiggened you are, if you see the dreaded pirate Hans Sprungfeld coming at you, you’re going to run.

3 | Springfield Dog Track – “Think Of Them As Little Horses” 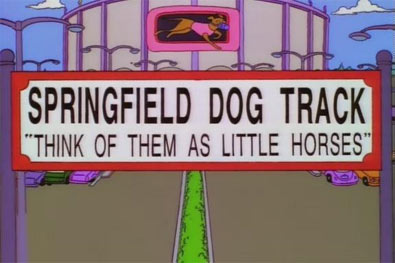 This pretty much wraps up the “sport” of dog racing in six words. (The sign clearly makes an impact on Homer, as he yells, “Come on, you little horse!” — an excellent callback.) 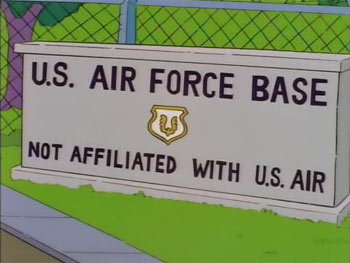 A great statement on branding. Even the Air Force wants to make sure no one confuses them with U.S. Air. 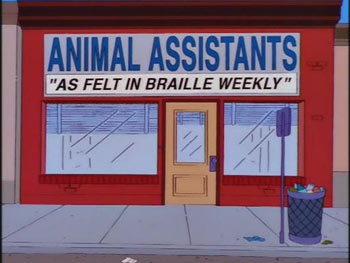 Another one that made me laugh out loud. Makes me want to go get a helper monkey.

6 | Springfield General Hospital – “Quality care or your autopsy is free” 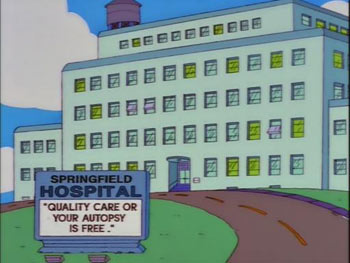 I love this sign because it says SO much by saying so little. It also really summarizes the philosophy of Dr. Nick AND the Hollywood Upstairs Medical College. 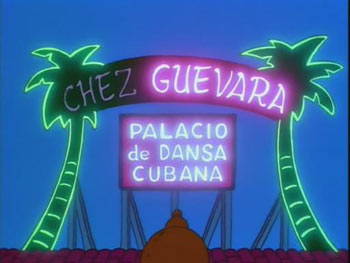 This is the club where Tito Puente is performing in the “Who Shot Mr. Burns?” episode. I was too young to get the joke when the episode first aired; when I saw it last year, now aware of who Che Guevara is, I loved it. (It’s good now to go back through older episodes and see all the jokes you now get because you’re older.) 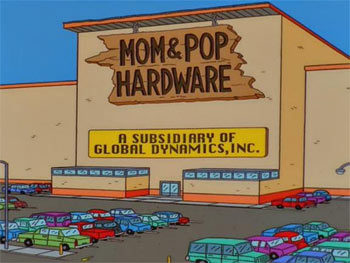 Such brilliant social commentary on the hardware store industry. Summing up the effect of Home Depot in one quick sign. 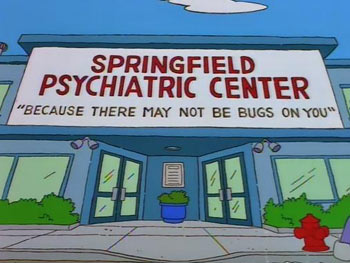 The problem: This is actually a decent slogan for a place like this.

(This one is from the Marge “Fear of Flying” episode, by the way — not when Homer and Michael Jackson are locked in a mental institution a few seasons earlier. I like the fear of flying episode for the ‘Blowenstein. Blowenstein.’ bit toward the end. And Homer impersonating a pilot at the beginning. 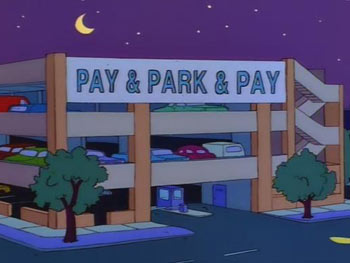 Great episode (the Sideshow Bob episode runs for governor episode) and a great sign — one that reflects the lifelong dream of everyone in the obnoxiously overpriced parking industry. 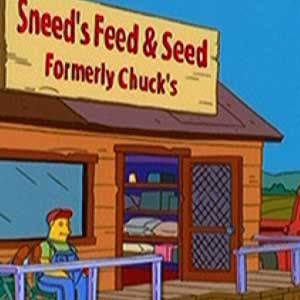 Yes, this is the best. No, you probably won’t get it at first. Just give yourself a minute to stare at it to try to figure it out. Because once you get its alliterative subtlety, you’ll realize that The Simpsons slipped this dirty, dirty sign past all of us… and that it is, quite possibly, the cleverest sign of the entire run.