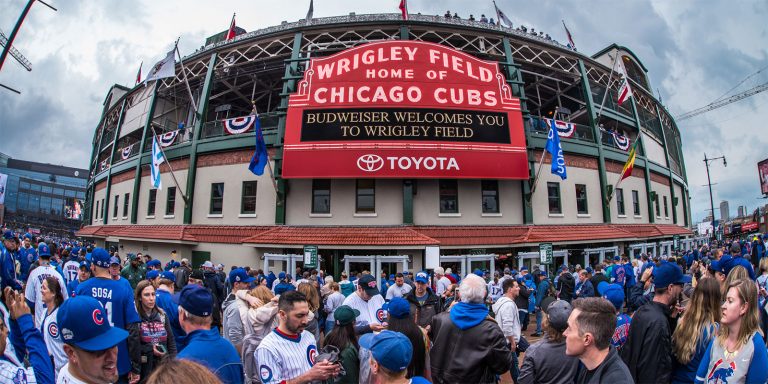 I visited Wrigley Field to make a video for work. Here’s what I learned.

If you’ve been reading, you know I’ve gone to AT&T Park in San Francisco and Fenway Park in Boston to make videos for work. The third and final stop on our work-sponsored baseball park tour was Wrigley Field in Chicago. Here are some things I learned…

1 | The nights the lights went up in Chicago

I knew they resisted putting lights in for a long time… but I didn’t realize the lights only went up in 1988. That’s madness. I also didn’t realize they only play 30 night games in Wrigley every year. It’s a good thing all the Chicago-area businesses are so cool about employees ducking out of work for afternoon baseball games 50 times a year.

I had no idea that the Chicago Bears played football at Wrigley. Especially not for the FIFTY YEARS that they played there (1921-1970). Wrigley doesn’t look like it could hold a football field, and it can’t… apparently, for the entire time they were at Wrigley, a corner of one of the end zones was cut off because it dipped into the visitor’s dugout.

Wrigley was the first place that started playing the Star Spangled Banner before sporting events.

Wrigley was also the first ballpark that let fans keep the foul balls and home runs they caught… before that, people had to throw back the balls they caught.

5 | Bring out the elephants

There’s a big gate in right field… apparently, that was built because, back in the day, the circus used to go to Wrigley… and they needed a place to bring in their elephants.

At one point, there was even a skiing event held at Wrigley, with a ski jump built from the press box down to home plate… and the skiers landing around second base.

Moreso than even Fenway, I get the feeling that if anyone ever tried to tear down Wrigley Field, the people of Chicago would riot. I actually can’t think of any single event that the people of that city would be more outraged and passionate about.

8 | Cubs gear brings out the stereotypes?

Almost every single person at the game was wearing Cubs gear… and clearly the biggest sensation-du-jour is Kosuke Fukudome. I saw an incredible number of his shirts. And Japanese Bonzai-style headbands. And fairly racist shirts that said “Horry Cow.” He proceeded to go 0-2 with two strikeouts and a caught stealing in the game.

It’s good to see that, in the Wrigley bathroom, they’re still rocking the urinal troughs. Nothing says a Cubs game like standing shoulder-to-shoulder with two drunken men, all simultaneously relieving yourselves into one huge, foul-smelling tub.

The day we were there, the person singing Take Me Out To the Ballgame was… William Petersen from CSI. The Cubs really drawn the strangest celebrities.

And finally, maybe it’s the Cubs being in first at this point in the year or maybe it’s faith for faith’s sake… but every person in that ballpark genuinely seemed to believe that this is, finally, the Cubs’ year to win it all. After a century-long drought. And, hey, since the Indians are out of it already… I say, why not?