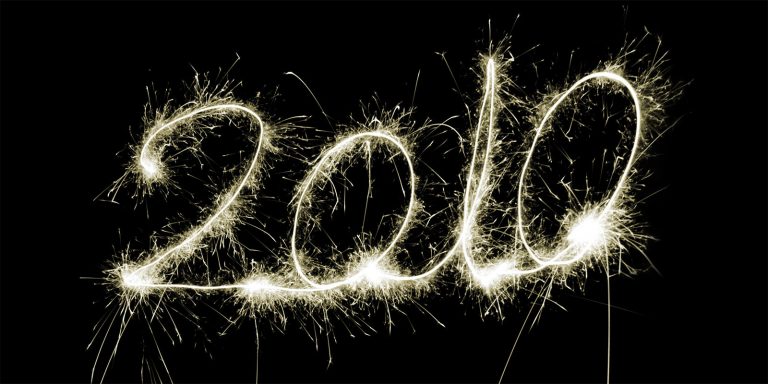 My grandiose plans for next year round into form.

I’m writing this from a hotel room in Tampa, Florida. I’m in the middle of a cross-country road trip back to L.A., but this was the main stop — three days in Tampa with a ton of college friends to watch our alma mater, Northwestern, play in the Outback Bowl. (This is only Northwestern’s third New Year’s Day bowl in about 50 years. So it’s a Big Deal to the fan base.)

Last New Year’s Eve, I posted a list of my 11 New Year’s Resolutions for 2009. I did pretty decently — 11 Points got exponentially more successful, I finished my screenplay, took a big career step forward, had a good transition into my 30s, worked on being more up front with people, took a class and did my laundry. This year I’m aiming to do even better on these.

Here are my resolutions for 2010, in no particular order.

This was a fantastic year for this website. Tons and tons of people found it and, from the feedback, most of them really seem to like it. I formed great partnerships with sites like Comedy.com and Cracked.com, made some money from some good advertisers and actually started believing that this could be a career.

So this upcoming year… I want to take it even bigger. I don’t want to be an Internet celebrity or anything like that (in fact, I find the concept of Internet celebrities to be abhorrent)… but I do want to take things to the next level. Write more often. Market the lists better. Reach more readers. Get ads that pay well but don’t pop up over the content. Get off of Digg’s banned list (I’m still not sure how I ended up there, but it’s too bad). Do everything it takes to make this site better and better.

As the site has grown, I haven’t done as well as I’d like in corresponding with the people, ya know, make it grow by reading. I’m grotesquely behind on e-mail, I don’t respond to as many comments as I should, and I didn’t even know people could post on the Facebook fan page wall until a few months ago.

In 2010 I want to do a better job actually responding to the people who take the time to read, write and make this into a community.

I will also do the Inbox-O-Rama lists from time to time, just to keep people engaged. Plus I have plenty of stickers to give out.

Trying to get to the gym in the morning was too ambitious. I should’ve known that. I work until 3 or 4 am on a nightly basis and I’m pretty much a zombie for the first two hours of the day. So now that I am working from home and have time as an ally, I’m going to focus on getting to the gym regularly — but around 11 or so.

I’m an appeaser and a non-confrontational only child, so I often have trouble saying “No.” It’s actually gotten me into trouble in several different ways (which I’ll elaborate on a bit in the next point). Going forward, I need to work on asserting myself better and doing what I want to do… not just what I want to do to make everyone happy. It’s like the opposite of that Jim Carrey movie Yes Man. It’s closer to Liar Liar.

After I left my job, the biggest mistake I made was taking on a few projects that I shouldn’t have taken on. The main purpose for me leaving my job was to really focus on my personal projects. I got too carried away with other people’s projects that weren’t going to take me in the right direction. I will not be doing that going forward.

I’ve finally realized that the phone isn’t just going to randomly ring one day with someone offering me a shot at all my hopes and dreams. I’ve never really taken a shot at actively seeking the things I want in my career. At this point, it’s time for me to do that.

I wrote one screenplay last year. I’d like to do that again this year. It’s a different kind of writing than this site, and a kind of writing I really enjoy. I keep getting better at it as I do it… so now, I just need to do it.

I also want to write a few new sitcom spec scripts. The most recent sitcom spec I wrote was for Scrubs. And while I think it’s pretty strong… it’s oriented around Scrubs as it was during the glory years, not the current Scrubs: The New Class incarnation.

When I signed up for the 11 Points Twitter, I said I’d post 11 times a day. I think I hit that number three or four times. I’ve got to do a better job.

I find myself continuing to miss the education process. Not liberal arts classes that are just a waste of time. But classes where you actually learn something. I would like to take one — I’m thinking about taking a few in software development so I can start making smartphone apps. I spend a lot of time writing, but I also programmed all the PHP and MySQL for this website from scratch. I like that computer programming uses an entirely different portion of my brain.

10 | Do laundry before it hits a critical mass

I no longer have a full-time job. There’s no reason to allow Mt. Laundry to reach a point where it can be seen from space like the Great Wall or the Truman Show Dome.

But don’t go asking me if I miss my old glasses.

11 Points to Wrap Up the First Year of 11 Points

11 Points Gets a Book Deal!