The real sequel to Mario, Popeye’s connection to the series, a Nintendo knitting peripheral and more.

I’ve been a Super Mario Bros. fan for almost my entire life. I played the original Mario Bros. on an Apple II. I had an original Nintendo and played the first three games to the point of ingraining them so deep I can still pick up a controller and quickly beat them today. I even still, from time to time, play one of the newer Mario games. I dressed as Mario for Halloween in 1989, took 25 years off, and dressed as him again four days ago. I’m all in.

So I’m always shocked when the Internet is able to unearth some new insight into one of the early 8-bit Mario games that I never found out or figured out on my own.

It’s amazing what can happen when millions of fans have a simple way to connect and share their insights — a luxury that barely existed when Mario first came out but is now second nature. (I did occasionally frequent Nintendo Usenet groups in the early ’90s, but they were a fraction of a fraction of the video game braintrust that exists today.)

1 | Mario dies on the cover 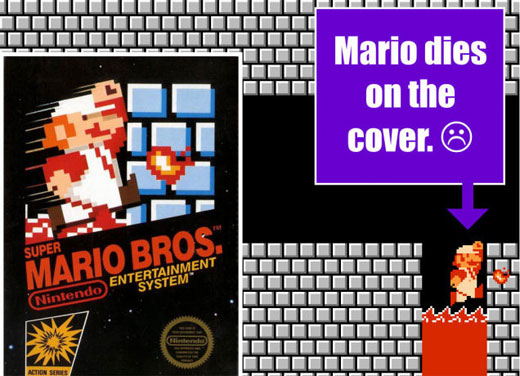 The iconic box and cartridge artwork for Super Mario Bros. passed in front of tens of millions of eyeballs before someone figured out what it’s showing: Mario falling to his death. The shot on the cover quite clearly shows Mario a split second away from hitting some lava in one of the Bowser’s castle boards and dying. I’m not entirely sure why they picked this moment for the box art; perhaps this was a subliminal message to kids that they’d be spending a LOT of time watching Mario die as they played the game?

2 | The official sequel to Super Mario Bros. isn’t either of the two things you might think it is 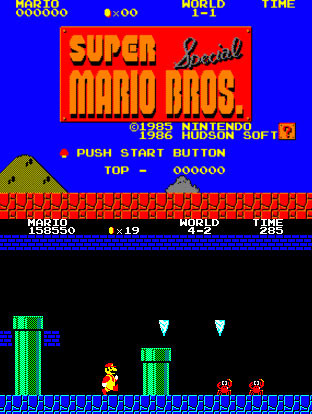 It’s now pretty widely known that the game called Super Mario Bros. 2 in the U.S. wasn’t originally a Mario game. It was a Japanese game called Doki Doki Panic reskinned with Mario characters — which is why everything about such a gigantic departure from the rest of the series. You haven’t seen the characters plucking vegetables since.

Until about seven minutes ago, I was in the camp that knew the above and believed the original sequel was a game very similar to Mario 1 but much more challenging that was only released in Japan — until it was put out for the Super Nintendo and called Super Mario Bros.: The Lost Levels. It turns out that’s not quite right either.

The first authorized sequel to Mario 1 was called Super Mario Bros. Special and was only released for NEC and Sharp PCs. It strongly resembles Mario 1 except that it’s more challenging, incorporates some new power-ups, and incorporates some of Mario’s older enemies like the crabs and falling icicles from Mario Bros. and the barrels from Donkey Kong. It also looks terrible — and I can say that after watching more than 15 minutes of someone playing it on YouTube — the graphics processing wasn’t sophisticated enough to handle scrolling, so every time Mario would get to the edge of the screen, the game would go black then load the next screen to the right.

I’ve talked about the origins of Mario characters’ names before and noted that Mario was originally called Jumpman until the name was switched to Mario after a janitor at Nintendo of America.

An interview with Mario’s creator about five years ago revealed that Jumpman actually wasn’t the very first idea for a name. Shigeru Miyamoto, the genius of all video game geniuses, wanted Mario to be named… Mr. Video. Which was short for Mr. Video Game. Miyamoto’s plan was to put the character in basically every game and have him become THE symbol of video games. Which he kinda did — probably because he was NOT named Mr. Video Game.

4 | The clouds and bushes in Mario 1 are the same graphic, just different colors 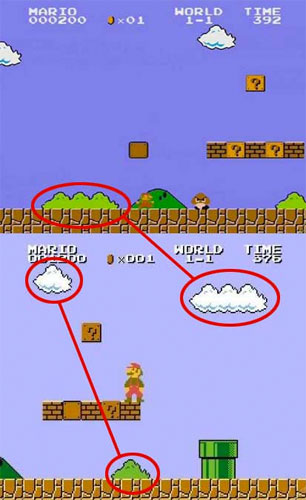 The entire Super Mario Bros. game was only 32 kilobytes — or approximately 44 times smaller than one photo you now take on an iPhone. That’s a mind-bogglingly incredible achievement — but also meant a few corners had to be cut. One of those corners was in the design of the clouds and bushes. They’re both the exact same graphic sprite, only one is green and one is white. Seeing as it took more than two decades before people really noticed and started talking about it, I’d say they made a good call.

5 | Mario was modeled after Popeye

Donkey Kong was originally slated to be a Popeye game and all the character designs and sketches were done with Popeye in mind. But Nintendo lost the license with Popeye at the last minute and had to go generic — with Mr. Video Game/Jumpman instead. So Mario is modeled after Popeye, which I guess means Donkey Kong is Bluto, the Princess is Olive Oyl, power-up mushrooms are spinach, and Toad telling you the Princess is in another castle is like the guy telling you he’ll gladly pay you Tuesday for a hamburger today.

6 | Every brick in Mario 1 is actually a trapped human

No kid read the Super Mario Bros. instruction manual back when they got the game. The game was intuitive enough to just grab and play — or you’d already played it at a friend’s house and didn’t need reading to get in the way of playing. So it wasn’t until the Internet that the game’s back story from the manual became common knowledge.

Turns out Bowser was an evil magician who turned all of the good people of the Mushroom Kingdom into bricks. So every time Mario breaks a brick he either… um… frees or murders a person.

7 | There’s a Mario sewing game in Japan — and a Mario knitting game almost came out in the U.S 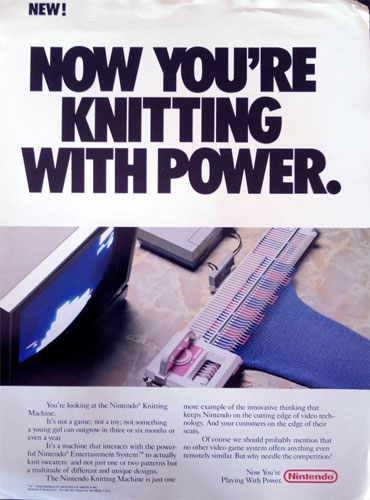 Nintendo has, apparently, an odd but persistent desire to incorporate sewing and Mario — in spite of all common sense that would say the two fan bases are about as mutually exclusive as it gets.

In Japan, there was a Game Boy Color game called Mario Family that hooked up to a sewing machine and had you guide it to sew various Mario characters onto fabric. The U.S. attempt is way worse.

At the Consumer Electronics Show in 1987, Nintendo of America unveiled a NES loom peripheral. It would hook up to your Nintendo and you could control the loom with your controller, weaving whatever you wanted — including Mario characters. They wound up scrapping the idea before it ever went to market.

When you get a mushroom in Mario 1, it plays a sound that lasts around two seconds as you get bigger. When you jump on a flagpole to complete a level, it plays a fanfare that lasts around eight seconds. It turns out the mushroom power-up sound and the level completing fanfare are virtually the exact same tune — the mushroom version is just sped up. (You can hear this here, in the section called “Mushroom Powerup.”)

I assume they *never* figured people would analyze their sound effects closely enough to notice. They also probably never figured the world’s greatest symphonies would play orchestral arrangements of the game’s music either — and that actually happened BEFORE the hardcore sound effect analysis. 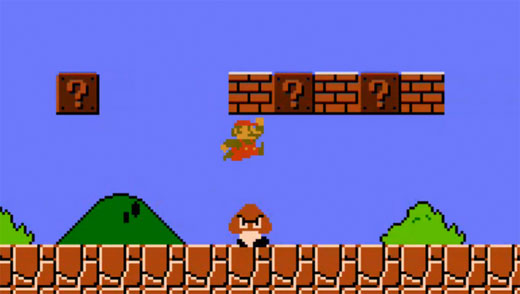 Conventional wisdom always said Mario smashes bricks with his head. He doesn’t. When you get in much closer — a luxury we didn’t have on the TVs of the ’80s — you can see he’s actually holding his tiny fist above his head and breaking the bricks with his hand. It’s still not something you’d want kids to replicate, although Nintendo was 25 years ahead of the curve on concussion prevention.

10 | Part of Super Mario Bros. 3 is modeled after Japan

There’s a part of World 3 in Mario 3 that’s modeled after Japan — with a castle located in the spot corresponding to Kyoto, where Nintendo’s headquarters is. It’s on the larger, main island; the other islands are just kinda useless. In the game, not in Japan. At least I *think* not in Japan. 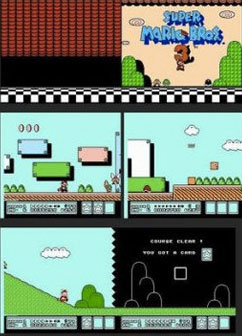 We’ve had a lot of time to think about them and, as a result, people have found credible reasons that the earliest Mario games never happened…

Super Mario Bros. is all the result of Bowser’s dark magic that’s completely undone by the Princess when Mario rescues her. (It’s why Bowser kidnapped her in the first place — only she had the power to reverse what he’d done.)

Super Mario Bros. 2 all happens in Mario’s dream. The ending of the game proves it as you see Mario asleep; even the instruction manual says it takes place in “Subcon,” which is clearly short for subconscious.

Super Mario Bros. 3 is just a play. At the beginning of the game a curtain rises. All of the blocks in the game cast shadows and are clearly hammered into sets. And when you finish a level, the sets and scenery end and you exit the stage.

So, in conclusion, your childhood was a lie. Thanks, Internet.

Can I Beat Super Mario Bros. With My Feet?