Although I’m not a regular soccer watcher, I decided to do a live blog of the U.S. World Cup game versus Algeria.

Refresh for updates throughout the game.

My alarm clock hasn’t gone off at 6:30 since… well, I’m sure I’ve woken up this early once or twice before, I just can’t think of when. I woke up to watch the pre-game show.

At this point I’m not sure why. I don’t get it. I don’t know why the three lineup changes the U.S. made are a big deal. I don’t really know soccer. Haven’t played since 8th grade.

But, like lots of Americans, I can’t help but watch the World Cup. First of all, it’s not a hard game to follow — once you understand the offsides call, it’s not too hard. Very different than baseball — in college, I remember sitting there trying to explain a game to an international student from Turkey. For three hours I explained every single aspect but by the end, he still didn’t get the sport. That doesn’t happen with soccer. You kick the ball, you try to get it in the net. There aren’t 18 different ways to reach first base, there’s one… uh… goal.

I feel like Americans are into the World Cup, this year more than ever (and ratings prove that), because we may not love soccer, but we love a Big Event. And it’s very clear that this is a Big Event. It’s the sports equivalent of lining up outside the Apple Store for the new iPhone. How could we resist that?

To raise the stakes a little, I decided to follow in my tradition of 11 Weirdest Super Bowl XLIV Prop Bets (All of Which I Actually Made) and put a few strange online bets on this game.

Unlike the Super Bowl, you can’t bet crazy aspects of a World Cup game — like length of the National Anthem, or how many times they’d pan to the North Korean “fans” who are really paid off Chinese people. But you can still find ways to waste money on ridiculous bets.

Algeria just took a shot that hit the crossbar. Wow.

As I watch these games, I realize one of the reasons soccer hasn’t made it in the U.S. — the TV networks could never allow it. They need commercial breaks. I mean — they made football and basketball adapt to TV networks by creating the TV time-out, not vice versa.

That little Hyundai logo next to the score isn’t going to cut it. There’s no way that’ll bring the revenue. ESPN would never allow us to become soccer fans. If they ever did another SportsCenter feature to decide “Who’s Now?”… soccer would most certainly NOT be now.

A U.S. goal taken away by a bad call. This is really going to turn Americans off — the bad calls over and over. If we want that we’ll just watch all of our other sports that are higher scoring, thank you very much. 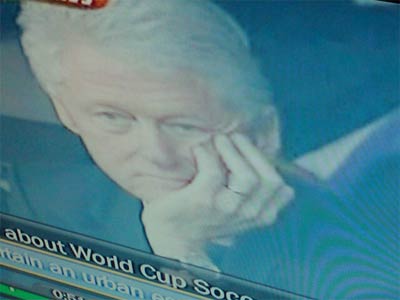 Bill Clinton looked upset. But maybe that was because he was in South Africa and stuck wearing his wedding ring.

So England’s winning 1-0, meaning that if everything stands right now, the U.S. won’t make it into the next round. No pressure or anything. At least we’re 38 minutes in and the U.S. didn’t do their “let up an early goal” thing.

Soccer dribbling often seems so useless to me. Whenever I see a soccer player do a huge sequence of dancing/dribbling moves then promptly lose the ball it reminds me of the Indiana Jones moment where the guy flips his sword around for a minute then Indy promptly shoots him. You know, back before Indiana Jones had to travel to Peru to hang out with aliens.

Damn the U.S. has had some good chances. The guy on Algeria with the bleach blond mohawk doesn’t know what to make of it.

Without commercials, time-outs, pick-off moves, incomplete passes stopping the clock and the referee getting knocked out when someone accidentally gets Irish whipped into him, these games really move. 47 minutes and we’re already at halftime.

It’s a 0-0 tie thus far, which always takes me back to The Simpsons episode where they’re watching a TV commercial for a soccer match. “Fast kicking… low scoring… and ties? You bet!”

I’m feeling good about my bet that there’s going to be a goal between the 45- and 60-minute mark. It has anecdotally seemed to me that there’s always a goal shortly after halftime. One team comes out more mentally prepared than the other. I see it in American sports too — whatever team Cleveland’s playing is always more fired up and composed coming out of a break in the action.

On a side note, this live blogging thing is really frantic. I REALLY should’ve picked an event with commercials to try this for the first time. I basically haven’t stopped typing for an hour straight.

This is perfect drama. England’s got a lead, and, for now, the U.S. is out. One goal and all of a sudden they’re on top. As annoying as it is that the England and U.S. games were on simultaneously, it really is building the drama.

Also, with the shady, conspiracy theory-inducing atmosphere that seems to surround an international sport like this, I guess they have to have them simultaneously to avoid collusion. Why am I so distrustful of Europeans? It must be all the flopping.

I love that the coach’s son is on the U.S. team and gets a ton of playing time. Flashbacks to my little league days. So many flashbacks.

I’m alone in my room right now so I have no idea what the general U.S. sentiment is at the moment. (Other than the occasional shots of some random bar in Seattle that ESPN keeps going to.) But, right now, I’m in full-on, “OK, it’s time to make something happen.” mode. They keep missing great opportunities (like the one they just missed as I was typing this). American impatience. It’s what this country was founded on.

Good line in the comments just now from a reader named Claire, in response to me talking about how the U.S. coach’s son gets so much playing time.

I love that the coach’s son is on the U.S. team and gets a ton of playing time. If only the son was the captain too and didn’t quite have the passion his dad did, but instead preferred ballet or something, it would be the perfect made-for-TV movie.

I really wish that Michael Bradley was like Kurt on Glee. There are enough guys on the field with mohawks right now that at least one of ’em could be Puck.

They just flashed a stat that the U.S. is 0-6-0 in the third game of group play in their last six World Cups. Yikes. I never should’ve bet they’d win 3-0. 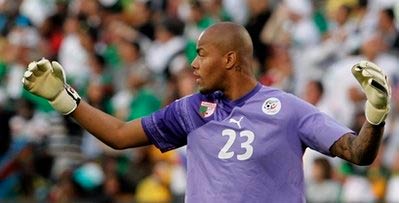 Now we’re getting to the point where we need to turn on the England game to hope it gets tied up. Remember picture-in-picture? Does that still exist? I think my parents still have it, with the second tuner going through the VCR. Do THOSE things still exist?

My God, how does one of these U.S. shots not go in?

In the comments, LBailey just confirmed my collusion theory from a few points back as to why the U.S. and England games are being played at the same time. “Literally is the reason they’re played simultaneously. 1982 had a game where Germany and Austria needed to finish 1-0 for them both to qualify. Goal after ten minutes, then not another shot for the game. Pretty brutal to watch. Interestingly, Algeria were the team to lose out.”

I knew it would be Europeans.

Less than 10 minutes to go, and America’s love affair with soccer all hinges on one goal.

The coach from the U.S. reminds me so much of the coach from Not Another Teen Movie who always says “Goddammit.” Time for Bradley to channel some of that guy. 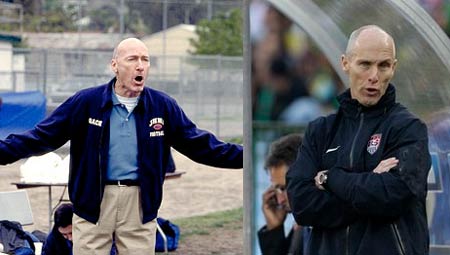 Less than eight minutes left. This is some intense stuff.

Apparently the World Cup doesn’t have the NBA rule where someone has to leave the game when he’s bleeding.

It’s kind of amazing — the buzz from the vuvuzelas seems to have really calmed down. Either that or I’ve grown immune to it.

That was, quite possibly, the most entertaining soccer game I’ve ever watched. Thanks so much for hanging out with me during my first live blog. Should we do this again during the knockout stage?