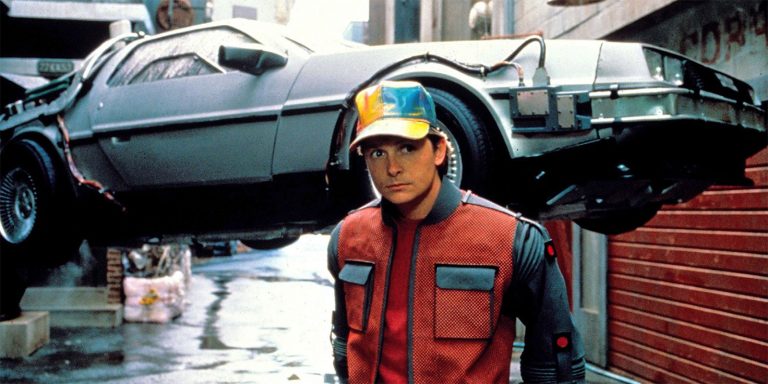 We’re about six-and-a-half years away from 2015, the future year from Back to the Future Part II. Here are some predictions the movie got right.

So, since it’s 2009 and we’re only six-and-a-half years away from the future they traveled to (October 2015)… I think we’re close enough to do an audit. How’d they do? How accurate were their predictions? 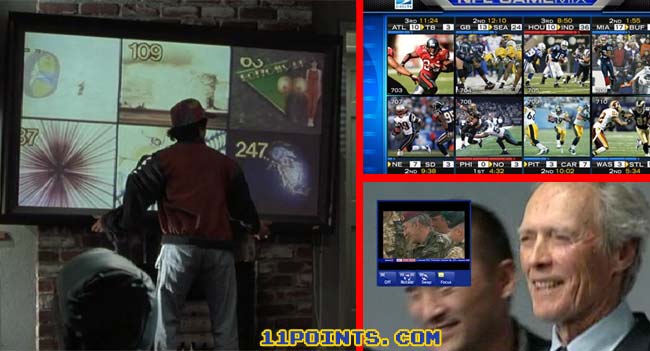 When Back to the Future Part II came out in 1989, the only people who had tons of channels were people in rural areas with no cable service who had giant satellite dishes in their backyards. Even if you had the most souped up cable package your cable company offered, a finite number of networks existed.

We were many, many years from two hands worth of Discovery channels, ESPNU, SoapNet, SyFy and whatever the hell The N is.

So when Marty McFly Jr. comes home and turns on six channels on his flat-screen TV… some of which had channel numbers in the hundreds… this was a far-fetched view of how we might watch TV in the future.

Since then, everyone got hundreds of channels (and flat-screens). Picture-in-picture came… and basically went.

And watching multiple shows simultaneously isn’t a fantasy anymore… several years back DirecTV debuted their Game Mix feature that let you watch eight NFL games simultaneously. (Which, by the way, was a great way for me to get a side-by-side real-time comparison of just how slow the Browns defense was compared to the rest of the league.)

And this isn’t even taking into account the way people use the Internet now with tabbed browsing, multiple IM windows, RSS feeds and social networking sites constantly pumping us full of ADHD-inducing visual stimulation.

2 | A baseball team in Miami 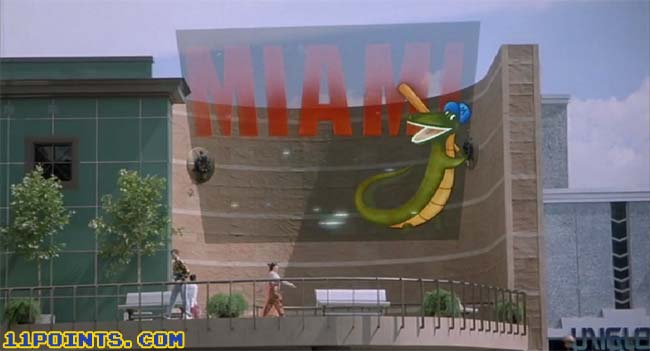 This one got a ton of press back in 1997 when the Florida Marlins bought their first World Series championship. (Yes, I’m from Cleveland and yes, 11-and-a-half years later and I’m still bitter about it.)

The reason: In 1985 (when BTTF Part II is set) and in 1989 (when it was released), there was no baseball team in Miami, let alone one that would be a championship contender.

In 2015, Marty sees that the Cubs beat a baseball team from Miami to win the World Series. It’s randomly prophetic… but prophetic nonetheless.

Of course, we all know what happened when the Cubs and the team from Miami actually met in the playoffs (in the NLCS, not the World Series)… a nice collective bed crapping by Dusty Baker, Steve Bartman, Kerry Wood and Mark Prior made sure Back to the Future Part II wouldn’t come true. 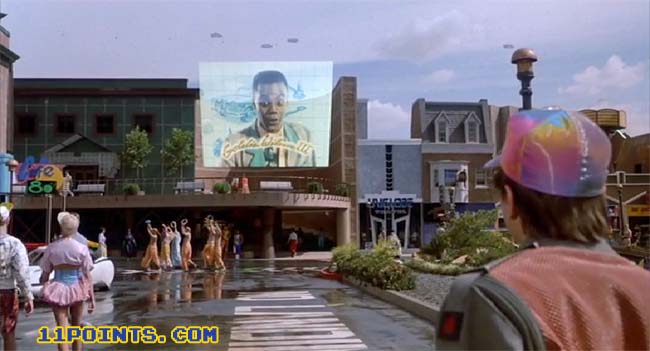 When Marty is in 2015 Hill Valley, a video screen pops up in the town square and starts playing an advertisement for converting regular cars to flying cars. At this point in 2009… and, most likely, even stronger by 2015… omnipresent video advertising is/will be a legit factor in our lives.

Old standard billboards are starting to be replaced by video billboards. TVs are cheap enough that companies are putting them everywhere, and blasting us with advertisements. And, again, there’s the Internet, where we’re constantly looking at video ads on our screens.

And I, personally, am OK with that. I like the video billboards that tell me what song different radio stations are playing. I like when I’m in line at the grocery store and there’s a TV screen running sports scores and celebrity gossip headlines underneath an advertisement for diapers. And I like when a mall kiosk ad switches so you have to go, “Wait, did I just see that there’s a new Zac Efron movie coming out? Damn, now it’s already on to an ad for Cinnabon… and I don’t have to be informed about Zac Efron. Win-win!” 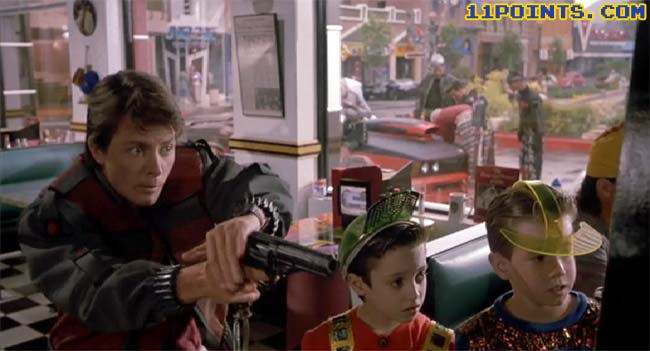 When Marty is at Cafe ’80s he plays the old school NES game Wild Gunman to impress two little kids… the kids, though, can’t believe it’s a video game where you have to use your hands.

I was at the Consumer Electronic Show in January and tested out a video game where I steered a car by only holding my hands in the air. No controller. And with the way that Wii is taking video games… from controller-based to motion-based… it’s entirely realistic that in six-and-a-half years, a new video game system will be out where you don’t have to use a controller.

Also, weirdly enough, while re-watching this, I realized that one of these little kids looked a lot like Elijah Wood. And, turns out, this was his movie debut. Who knew? 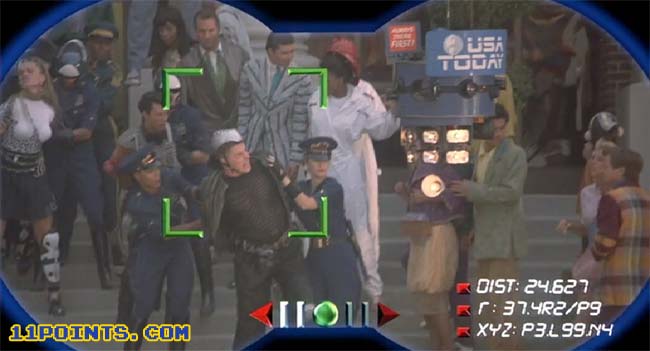 After Griff and his gang smash into the courthouse and get arrested, a USA Today camera appears from the sky to take their photo.

In this era where all of us now have cameras on the phones in our pockets… there are more security, ATM and traffic light cameras than any of us realize… and you have to assume pretty much anything you do outdoors is being captured by a camera somewhere — the notion that cameras are everywhere is completely realistic. 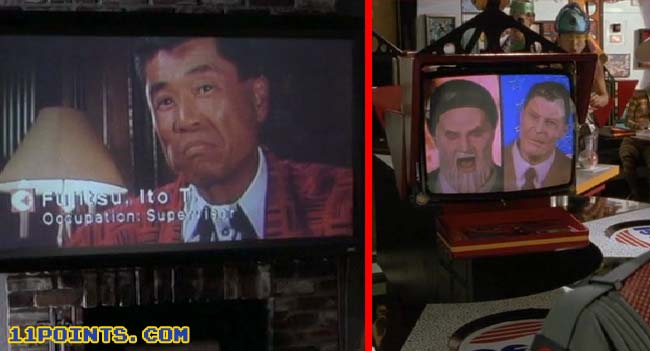 Older Marty McFly’s boss is Japanese. The special of the day at the Cafe ’80s (as told to Marty by a Max Headroom-esque Ronald Reagan and Ayatollah Khomeini, is mesquite grilled sushi. It’s clear that, in this imagining of 2015, the Japanese are pretty solidly entrenched in guiding American lives. (Also, mesquite grilled sushi definitely seems like a prediction of fusion restaurants.)

Sure, they got the Asian country wrong (by 2015 it’ll be the Chinese, not the Japanese, who own our asses)… but I’m going to give this a “close enough.” 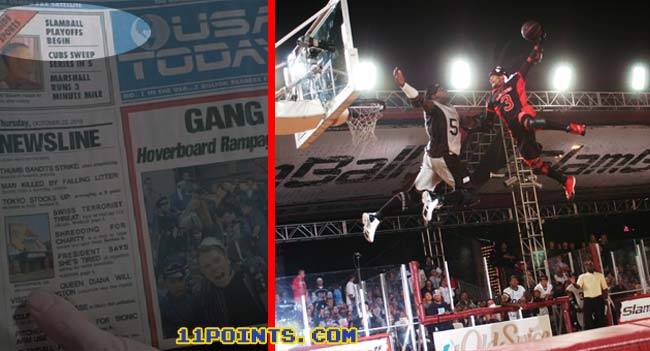 While it didn’t take America by storm… its level of influence and prestige is still borderline XFL levels… there is such a thing as Slamball. And, when I was at the NBA All-Star Jam Session in Phoenix earlier this year, they had a big, fairly popular booth… leading me to believe it’s not really going anywhere. 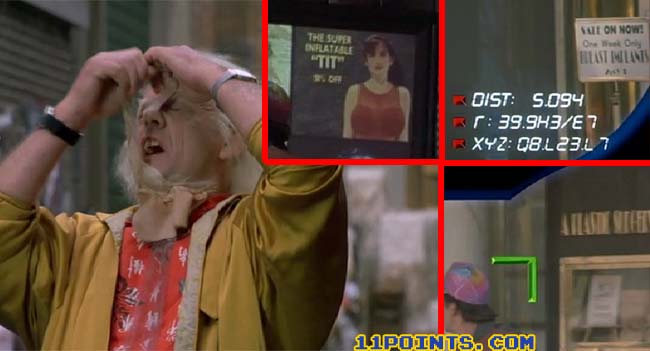 Just a fantastic (though kinda easy to see) prediction about how, in the future, people would be increasingly vain… and increasingly dependent on surgery to realize their vanity aspirations. Right after they land in 2015, Doc pulls off his aging mask and says, “I went to a rejuvenation clinic and got an all-natural overhaul. They took out some wrinkles, did a hair repair, a change of blood.”

Also, in the image below, I’ve included three other plastic surgery references in the future: A TV commercial Marty Jr. watches, a sign for a breast implant sale and a clinic itself.

If only Back to the Future Part II had mentioned labiaplasty, I’d start to get freaked out by its Nostradamus-esque brilliance. 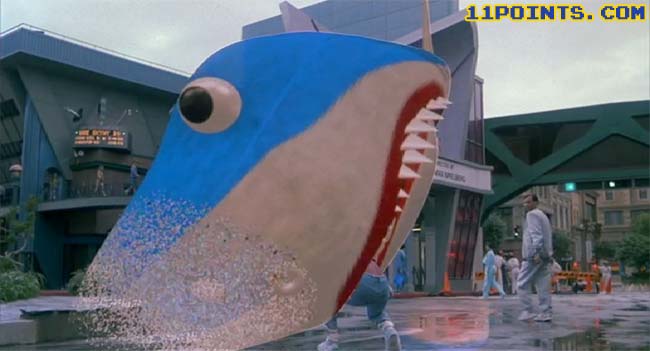 How is a giant hologram shark swooping down on Marty relevant to advertising today and in the immediate future? To me, it’s no different than logging on to Amazon and having them recommend stuff to me based on my past purchases.

It’s also no different than Google scanning your Gmail and putting ads on your page relevant to keywords it yanked out of your message chains.

The hologram Jaws is a visually-stimulating demonstration of in-your-face, targeted advertisements targeted to the individual, rather than to the masses.

Translation: I really do think we’re only a few years from hologram sharks attacking us on the streets.

And with as delayed sequel crazy as Hollywood is, I can’t guarantee that hologram shark won’t be doing the same thing as it’s doing in Back to the Future Part II — promoting a clearly-regrettable 19th chapter in the Jaws franchise. 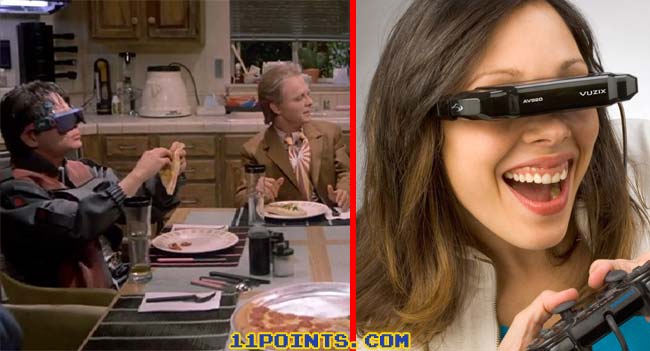 At the dinner table, Marty Jr. and the Marlene both watch TV on personal TV glasses. These exist now. I even reviewed a pair, called the Vuzix glasses, for work. (I also included them in the picture below.)

However… no one’s going to be wearing these regularly in six-and-a-half years for two main reasons. One, the picture is kinda crappy and disorienting. And two, future fashion will not have evolved to the point where you look like anything except an unbelievable gomer wearing these. 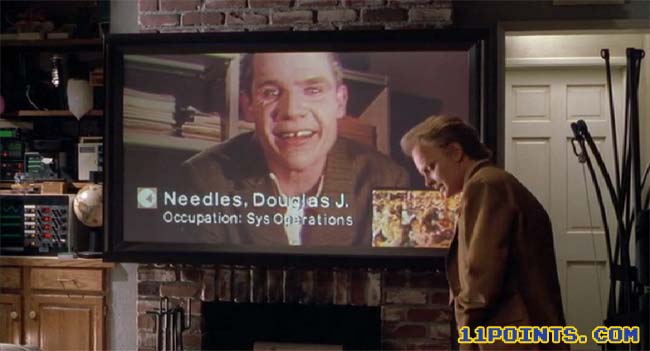 Why were people in the past always been so obsessed with video conferencing? It’s in every science fiction movie and book and on every future predictions list.

Video conferencing has to be the number one thing science fiction begged for… we got… and then we all instantly got over.

We have free video chat capability now and we don’t really use it. And you know why? Most of the time, we humans look like shit. It happens to all of us the first time we video chat — we turn on Skype, connect with our friend, turn on our laptop’s built-in camera… and recoil in horror at ourselves. The lighting is bad and the angle the camera shoots you is somehow worse. It’s hard to focus on a conversation when all you can do is remember how much work it takes you on a day-to-day basis to be presentable to society.

So, yes, Back to the Future Part II… it’s 2009 and we humans can Skype video chat whenever we want. But we don’t. And for those who do… at least 90 percent of those video chats are primarily about one person trying to convince the other person to get nude.

Coming tomorrow or Friday (whenever I finish): 11 Predictions That Back to the Future Part II Got Wrong.