Back to the Future Part II got some predictions very wrong for how things would look today.

Today, we go after the swings and misses in Back to the Future Part II… the things that movie predicted for 2015 and got completely wrong.

So here we go… 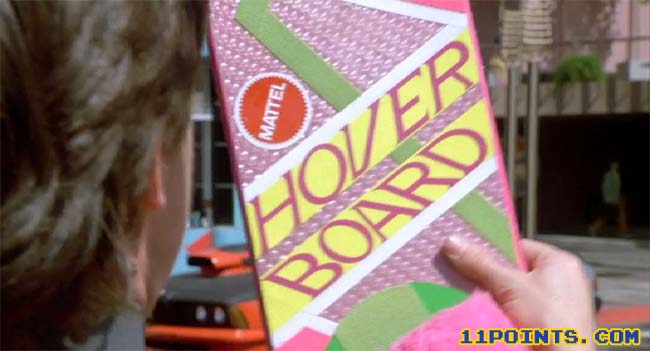 Of everything from BTTF Part II that we’re not gonna have in 2015, this is definitely the biggest disappointment. We don’t have hoverboards now, and we’re not going to have them in a few years. Technology just isn’t there yet.

According to Hovertech, an R&D company that focuses on developing hovering products, without either an engine or a track, there’s no way to currently make BTTF Part II-style hoverboards.

It’s a shame. I work for Break.com and, I can assure you, today’s kids have already figured out every possible way to injure themselves (and their genitals) with traditional skateboards. Hoverboards really could’ve expanded their horizons. 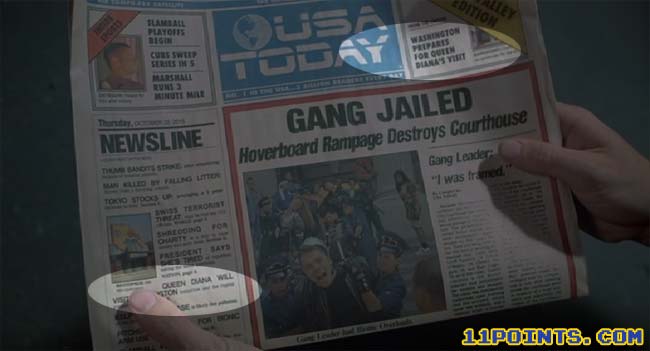 In the USA Today, there are two mentions of Queen Diana.

If you’re thinking, “Hey, guy, come on. Princess Diana was killed in a car crash. There’s no way Back to the Future Part II could’ve seen that coming.” That’s fine. I’m not faulting them for that.

I’m faulting them because, clearly, Queen Elizabeth is going to be alive and getting her royalty on in 2015. Even if Diana hadn’t been killed, she never had a shot at queen. Elizabeth is going to outlive us all. She’ll only be 89 in 2015. She’s got at least another 35 to 50 years of queendom left in her after that. 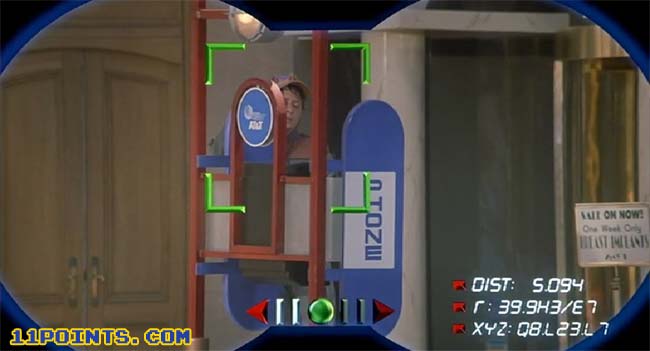 That’s not a particularly funny anecdote… in fact, it may be the least funny anecdote I’ve ever shared; I bring it up only because it stands out so much in this day and age to see a payphone, let alone see someone using one.

Back to the Future Part II did not see the cell phone explosion coming. Between Marty Jr. going to a payphone (as seen in the image I grabbed below) or the reliance of the McFly family on their home phone a few minutes later in the movie, it’s clear the people behind the movie had no idea we’d all have our own private, personal phones permanently affixed to our bodies in the future. 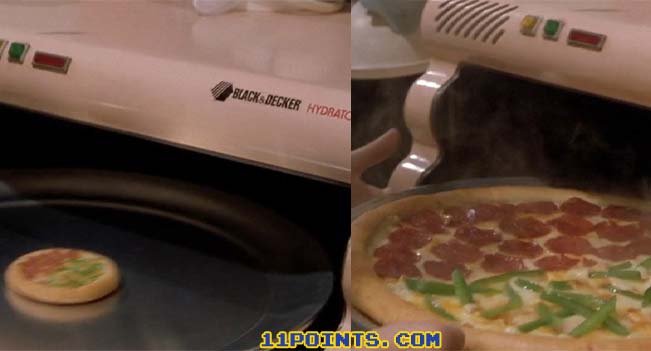 In my previous BTTF list, 11 Predictions that Back to the Future Part II Got Right, I mentioned that science fiction always seemed obsessed with video conferencing in the future. Well, we got that, and we don’t particularly care for it.

Another thing science fiction has always had a hard-on for: Compact food. Whether it’s meals in pill form, strange nutrient supplements or, like in this case, food that needs some kind of Dr. Frink-style re-bigulator, there’s eternally an inexplicable obsession with tiny food.

As it plays out in Back to the Future Part II, a tiny Pizza Hut pizza is inserted into the Black and Decker Hydrator, and then, seconds later, is a full-size, steaming hot, half-pepperoni, half-green pepper pizza.

Yeah… that’s not happening in real life any time soon. And even if it was available… would you really want this? We’re starting to realize that eating food that’s jammed with chemicals might not be the smartest long term decision… how many unnatural elements would be involved in making a two-inch diameter pizza one hydration session away from edible? 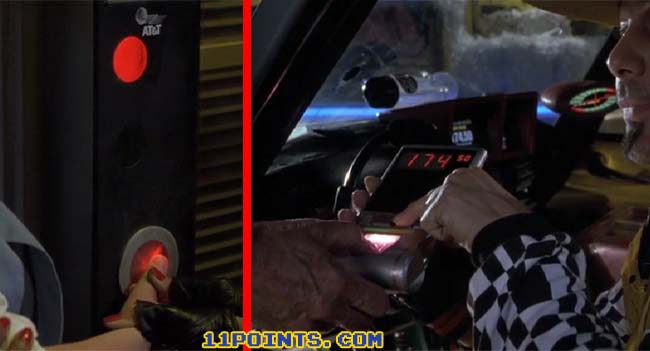 It’s an intriguing idea — in the future, Biff pays for a cab by just pressing his thumb onto a machine, and the police get young Jennifer into her (future) house using a thumbprint instead of a key.

Of course, for this to be a reality, we’d all need to register our thumbprints into some grand (probably government-controlled) thumbprint database… the mere mention of which would make the ACLU’s lawyers and Rush Limbaugh’s writers unite in protest.

And as intriguing as body embedded RFID chips are, we’re not six-and-a-half years away from them replacing currency… and keys. 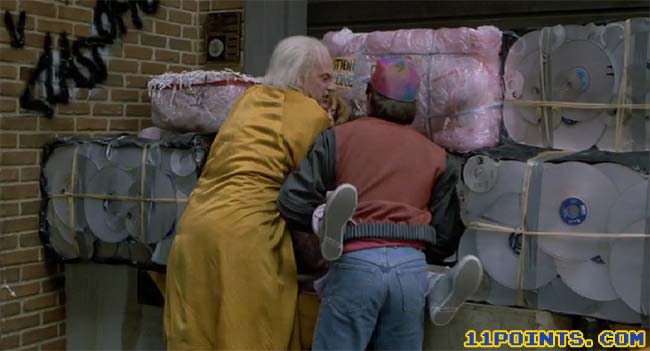 When Marty and Doc temporarily dump Jennifer’s body in an alley (on the list of deux ex machinas in Back to the Future Part II… of which there are a shitload… this remains toward the top of the list by the way), they dump her on top of some crates of laserdiscs.

Removable media is rapidly vanishing… and by 2015, could be damn near obsolete, with any movie you’d want to see being streamed to you on demand. We’re already getting there with TiVo and XBox and the Netflix box. But even if movies are still on removable media in 2015… it ain’t gonna be laserdiscs.

7 | The Cubs and the World Series 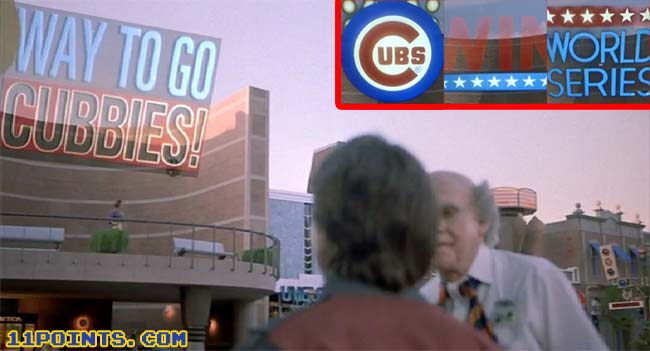 But I’m not going to go there. I’m going to find a different way to mock hopelessly optimistic Cubs fans.

In the scene where the Cubs victory virtually appears in the middle of the town square, the guy talking to Marty says the Cubs were a “100 to one” shot.

This, folks, was the bad call. Because it’s become an annual ritual for Cubs fans to stream to Vegas before the baseball season begins and put down money on the Cubs winning the World Series. And if they don’t go themselves, they give a friend some money to put on the Cubs.

I guess if the 100-year pattern of futility gets broken, they want that $10 to turn into something more.

But because so many people bet on them, the Cubs always have unrealistically good odds to win the World Series. More like four-to-one than 100-to-one.

If you want 100-to-one, you’re going to have to bet on a team with no shot AND no rabid fan following, like the Nationals. Or the Miami Gators.

8 | People working out while they eat 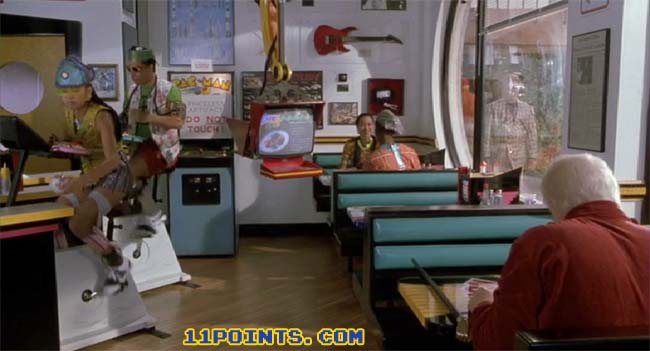 In fact, the Back to the Future Part II version of 2015 really doesn’t have ANY obese people. Huge misstep there. 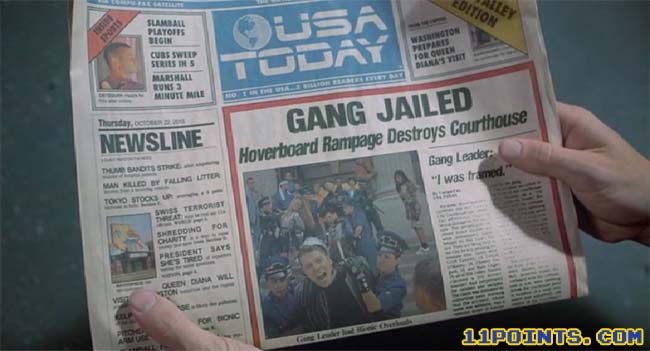 To the credit of Back to the Future Part II, at the top of the USA Today it says “Via Compu-Fax Satellite.”

So they got that we wouldn’t have our news delivered in the same way as we did in the ’80s… but they still saw us reading newspapers (just ones that weren’t delivered by a kid on a bicycle who wastes a ton of papers throwing them at tombstones, dogs, the Grim Reaper and non-customers’ windows).

But… with the direction of the newspaper industry (crumbling) and people becoming more and more and more inclined to getting their news from other sources… odds are, in 2015, you won’t learn about Griff’s gang smashing into a courthouse from the following day’s newspaper. 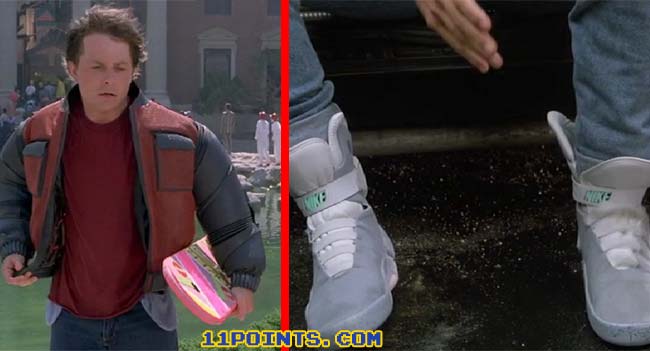 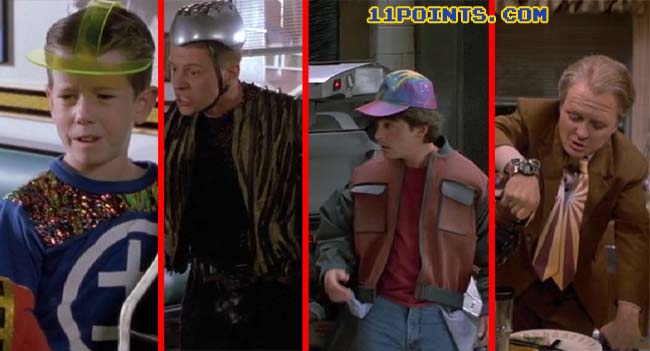 So, yeah. We’re not six-and-a-half years away from wearing outfits that make it look like we were dressed by blind neon salesmen.

Also, our clothes won’t dry themselves, our jackets won’t auto-shrink their sleeves to fit us and our shoes won’t tie themselves. 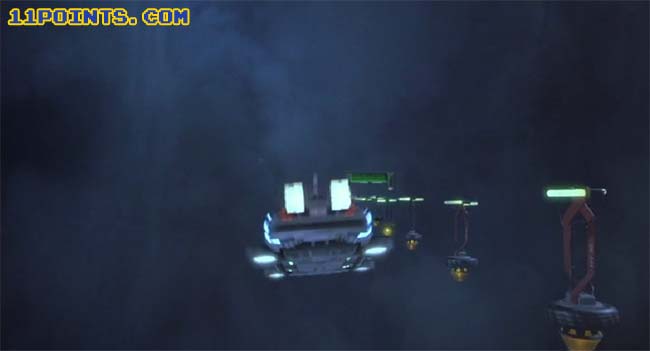 There are flying cars today (or, at least, prototypes). A few years back Neiman Marcus even sold a flying car in their Christmas catalog, for $3.5 million.

But… we’re not a handful of years away from these things being everywhere. Not even close.

If you haven’t checked out 11 Predictions that Back to the Future Part II Got Right, I say: Go for it now!