11 Pro Wrestling Moves That Require the Greatest Suspension of Disbelief 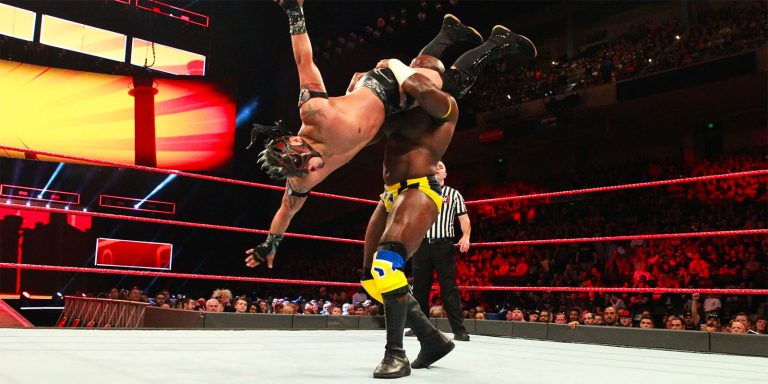 Pro wrestling requires quite a bit of suspension of disbelief. A few moves push that a lot further than others.

I’ve been a pro wrestling fan for about half of my life, although non-consecutively. I’m the Grover Cleveland of WWF/WWE fandom. I watched wrestling a ton in the late ’80s and early ’90s, quit from late ’92 until early ’94, watched obsessively from about ’95 until ’02, then stopped for the entire decade. Three years ago (almost to the day), I went to Monday Night Raw in L.A., and since then, I’ve casually watched wrestling again. It’s not can’t miss TV for me anymore, but I will flip it on if I’m home on Monday or Friday nights.

So… this list isn’t intended to mock pro wrestling. The entire enterprise requires a great deal of suspension of disbelief; you either buy in or you don’t. But it’s still enjoyable to call out a few specific moves that test the bounds of credulity.

Here are 11 professional wrestling moves that require fans (or, as the WWE now refers to fans, “members of the Universe”) to furthest suspend their disbelief. 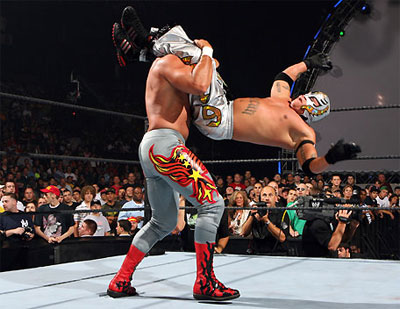 A hurricanrana involves jumping up, wrapping your legs around someone’s head and neck, and using that momentum to flip them over. The move used to be something you’d only see from the luchadores in Mexico (and, for some reason, Scott Steiner). Eventually it became more popular and commonplace in American wrestling. Even John Cena — who’s more or less the WWE’s Hulk Hogan of the 2000s — busts it out once in a while. Lately, I’ve even seen it creep into movie fight scenes. The only problem is… it’s never creeped into an actual fight, because it can’t work unless both people are cooperating or possibly ninjas.

When one pro wrestler grabs another by the arm and throws him to the ropes, then that wrestler hits the ropes and bounces back, it doesn’t quite add up. Especially when the “victim” of the Irish whip bounces off the ropes, the guy who did the whipping drops his head and the other guy runs right into a big back body drop. In real life, if you’re in a fight, running full steam at someone and he drops his head, you just won the fight. On the plus side, it’s nice to see a colloquialism that starts with “Irish” that isn’t about drunken behavior. Who says wrestling thrives on foreigner stereotypes?

The ref bump is a staple of big matches (especially ones that are a little overthought or, in wrestling parlance, “overbooked.”) One wrestler accidentally throws his opponent into the ref, at which point the ref falls down. But, unlike the wrestlers who can get up from any beating, that one bump leaves the referee in a crumbled heap like he’s been shot by a sniper. While he’s down, one of the wrestlers inevitably pins his opponent — but with no one there to count, the match must continue.

The lack of believability here stems from the length of time that the ref stays down. If a large man bumps into you and you’re knocked out for three minutes, you need paramedics slapping you and throwing water on you to wake you up — not Mr. Fuji.

I included these five moves and there are probably many more I’ve missed during my various hiatuses. Basically, these are all moves that require one wrestler to lie there, prone, for an extended period of time while his opponent does a gratuitously ornate sequence of rituals, hand signals, dance moves and catchphrases — only to culminate with a low-impact move like an elbow drop or a chop. Dancing before a punch doesn’t translate to a more deadly punch, no matter what West Side Story and You Got Served try to tell you.

A decent amount of matches throughout wrestling history have ended with one wrestler surprising the other by quickly rolling him up into a pin and getting a three count. The theory here is that the losing wrestler was caught so off guard by the roll up that, before he even realizes it, he’s fallen victim to the pin.

But… no one’s reaction time is THAT slow. Even if you’re drunk from Irish coffee or you’re trying to remember that funny thing you heard on the radio that morning, you’d realize what was going on before three seconds.

In a slingshot, one wrestler grabs another by the legs and falls backwards, propelling the other wrestler into the air and making him fly, often a decent distance, headfirst into a turnbuckle. The only problem is knees. If wrestlers didn’t have knees, this slingshot might work. But even the slightest bend of the knees keeps this from adding up.

Wrestling audiences love counting and get two primary opportunities. One, annually, when the 10 seconds tick down before a new entrant runs into the Royal Rumble. And two, more frequently, when a wrestler does something over and over repeatedly to another wrestler. The classic example (at least from the Hogan-era WWF) is ramming an opponent’s head into the turnbuckle 10 times. The problem, though, is that the turnbuckle looks like it’s soft. We’ve all seen the exposed metal beneath, but it’s not like there’s a bowling ball inside. The turnbuckle has a lot of padding before you get down to the metal widget connecting the ropes. So whether you ram someone’s head into it once, 10 times, or 7,000 times, all you’re doing is rhythmically and arithmetically pounding them into canvas-covered pillow.

8 | Smash with the steel ring steps 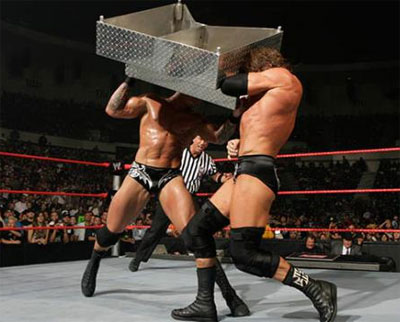 The WWE uses steel* ring steps that come apart. Sometimes the halves of the ring steps are wielded as weapons and treated like they’re deadly. But… the steps are hollow. You can see that they’re hollow. They appear more bulky than heavy. And it’s innately clear to everyone watching that a blow from hollow, fairly light steps can’t really hurt that much.

At some point, the WWE transitioned to wrestlers tapping out when they’re locked in submission moves. (It’s hard to pinpoint the moment, but the rise of MMA fighting certainly has something to do with it.) Back in the ’80s and ’90s, there was no tapping out. Instead, submission holds led to way more drama. The ref would lift the arm of the wrestler in a sleeper or abdominal stretch or full nelson. The arm would limply drop. He’d lift the arm a second time. Again, it would limply drop. Finally, he’d lift it a third time. And just as the arm was falling, signaling a submission, the wrestler would flex, raise the falling arm and use it as the impetus to get the crowd rallying behind him for a comeback.

It required a massive suspension of disbelief — how could you be so dead that you let your arm drop two times but not the third? — but certainly provided an entertainment factor totally befitting the pro wrestling environment. Tapping out, while more realistic, also feels more anticlimactic in comparison.

The Undertaker has been wrestling for more than two decades so he deserves his own entry. I’m not going to talk about the suspension of disbelief required to buy into the idea that he either works at a funeral home, derives power from an urn, or vacillates between a cult leader and badass biker. I’m going to focus on a move he’s been doing since his debut where he holds the other wrestler’s arm for stability as he walks along the top rope. Clearly, if his opponent is in good enough shape at that point in the match to be standing up, he should be cognizant enough to either (1) let go or (2) push the Undertaker off. But, as far as I know, no one’s ever done it. And since Undertaker only has one or two matches left in his body before the end of his career, I’m assuming no one ever will do it. (Although it would be a kind of funny way to end his legendary, two-decade WrestleMania winning streak — his opponent pushes him off during the rope walk and he loses by countout.)

This comes from an indie federation called CZW. The believability is nonexistent but the theatricality is just magnificent. Still… come on. It’s like the Harlem Globetrotters using a ladder. (Particularly a magical ladder.)

He’s using hypnosis!! How is this legal?!

This May Just Be the Funniest Minute in Pro Wrestling History