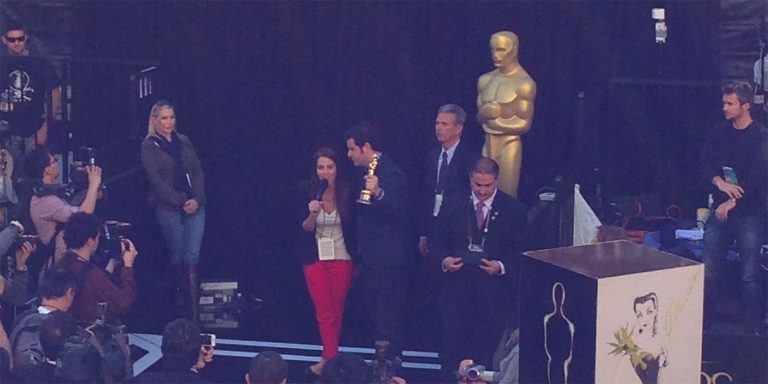 Sam and his fiancee attended the Oscars on Sunday. Here’s the behind-the-scenes insight.

On Sunday, I went to the Oscars. It was my first time, it may very well be my last time, and my attendance was the result of pure luck.

My fiancee, Angie, was one of the hosts on the first-ever Oscar Roadtrip. She, a co-host, and a small crew have been driving across the country in an RV with a real Oscar for the past month. They started in New York at the beginning of February and ended up in L.A. for the weekend. (You can check out their trip at OscarRoadtrip.com.)

As part of the trip, she got a rare ticket to attend the Oscars. And when she opened it, she found out she got a plus-one. I got to be that plus-one. Essentially, I was Jason Segel in Forgetting Sarah Marshall or GOB with Marta on Arrested Development.

Here are 11 random observations I made during my trip to the Oscars.

1 | There are no photos allowed, which means photobombing (and hunting) 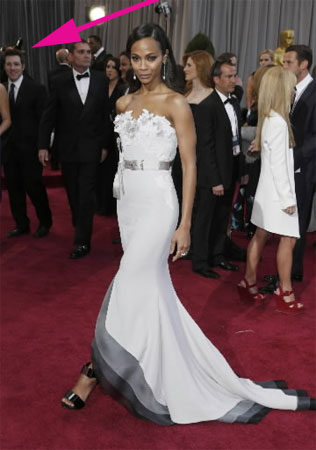 The Oscars do a pretty good job putting the fear of God in you about taking photos. The stated policy is: If you pull out your phone and take a photo on the red carpet, at the event or at the Governors Ball, we will kick you out and ban you for life. Would they do that to, say, Gerard Butler if he didn’t abide by that law? Probably not. Would they do that to me? Absolutely.

So, because I was a guest, because I really didn’t want my girlfriend to get in trouble, and because I’d rather not get blacklisted just in case The 11 Points Story ever gets Social Network treatment, I really followed the no photos rule.

But there’s no law banning you from photobombing celebrities. Which is why I noted that I was behind Zoe Saldana while photographers took hundreds of photos of her. As you can see in the photo above.

There’s a ratio of about three security guards for every one person attending the Oscars. (You don’t notice them that much on TV because they’re all in tuxedos and dresses.) When I parked my car in the parking garage the day before, a solid dozen security guards searched it. According to a scene from Homeland, that means the Oscars parking lot has tighter parking security than the CIA’s parking lot.

For example, take Channing Tatum’s experience. He emerges from a limo to hundreds of fans in the bleachers and on the street screaming for him. Then he walks down the south side of the carpet, getting hounded by every media outlet for an interview. Finally he ends up in front of the bank of photographers who take pictures of him until he finally says, “Ok, fellas, time for me to go.”

Angie got to experience both sides of this. First, she and her co-host Ben walked the carpet with the Oscar, did a bunch of interviews and photos. A few of them… 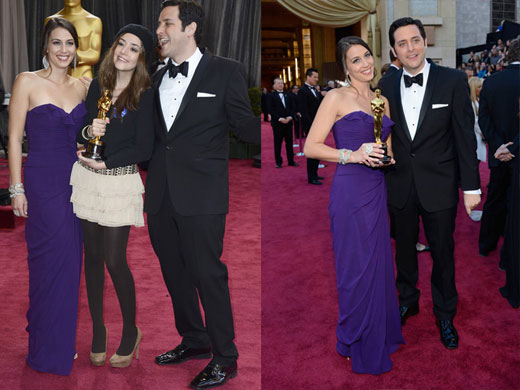 Then I met up with her back at the hotel so we could walk the red carpet as (basically) anonymous Oscar guests. We followed the “No pictures! Keep moving!” directive, although our friend Robin was in the bleachers and we paused for a while as she took a few photos of us. 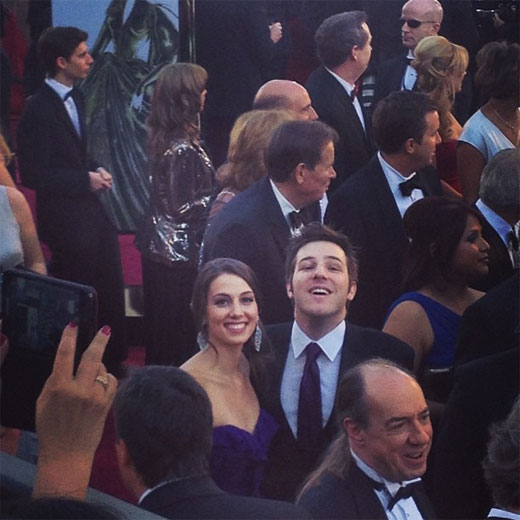 Then we kept moving.

With all of the security, all of the formalwear, and all of the general self-importance that accompanies the Oscars, I figured it was going to be a really tense, stuffy event. When we got into the theater after the red carpet, before the show, it turned out the opposite was true.

Everyone was shockingly relaxed and casual, especially the celebrities. My theory: This is one of the few times where celebrities stop feeling like celebrities. Because there’s a famous person in your field of vision at all times, no celebrity has all eyes on him or her. So they drop the guard you normally see them put up in public. Not being “special” seems to be liberating.

And if you’re wondering, these are the five famous people I had conversations with: Bryan Cranston, Michael Douglas, Chris Connelly, Dennis Kucinich (!!!) and Wolfgang Puck. More on the last one later. I did not talk about anything of particular substance with any of them. They were all extremely friendly.

5 | They serve you snacks — but not always at appropriate times

At some point in the night, every section in the theater gets snacks (movie popcorn and Reese’s Pieces). It’s a nice gesture. Unfortunately, my section got them at the worst possible time… the commercial break right before the In Memoriam montage.

So while Ernest Borgnine and co. had their tribute, every single person in Mezzanine 2 was crunching popcorn. Oops.

Our tickets were not great — the fourth of five levels up — but if you’re not on the main floor, there’s really not much difference between any of the balconies.

Because the Oscars are a tough ticket, everyone’s got some reason to be there; no one really just goes to the Oscars for the hell of it or because they were the 15th caller to a radio show. I talked for a bit with the guy sitting next to me. He was there from London — because he’s Shirley Bassey’s manager and lawyer. So after she performed the Goldfinger theme and got the first standing ovation of the night, he was thrilled. But thrilled in a refined, British way — meaning he nodded his head and said, “Sensational.”

(Because I had to, I asked him if he’d ever heard the Simpsons MAX POWER parody lyrics to Goldfinger. He had not. I stopped trying to jog his memory at, “Max Power. He’s the man! Whose name you’d love to touch.”) 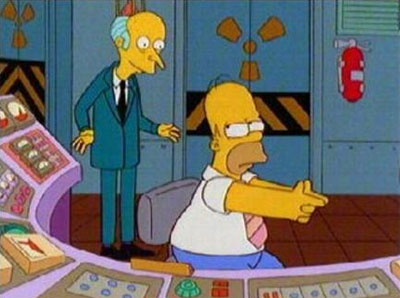 7 | The show is far funnier and more entertaining in person

I wasn’t expecting this, but being at the Oscars makes it hard to judge the Oscars. The jokes were funnier because I was there. The musical numbers did not make me incredibly bored like they do when I’m watching at home. Even the acceptance speeches seemed more heartfelt and intimate.

And the biggest surprise: The show actually didn’t feel that long. When Seth Macfarlane switched from commenting on every single one of his jokes (e.g. “Well, that’s that joke.”) to making jokes about the show’s length, I was mostly disappointed that meant the show was about to end.

Also, it’s a definite sign of the times, but it almost felt incomplete to watch the Oscars and not simultaneously be on Twitter. I feel like I missed all the jokes. I tried to read them the next day, but it wasn’t the same. 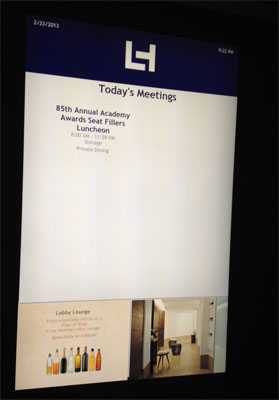 Everyone knows about the seat fillers at the Oscars. (They are VERY real. They even had a meeting at our hotel the day before the event.) And they exist because of the show’s policy that you can only enter or exit the theater during a commercial break.

That makes the commercial breaks feel so, so quick. There isn’t time to get out of your row, out the door, to the bathroom and back during a commercial break. So when you get locked out, you graviate to the complementary open bar. There’s one on every floor of the building. Of course, drinking steadily through your time outside the theater just makes you have to go back to the bathroom over and over — but that’s a vicious cycle everyone in the building seemed OK with.

After the show, the crowd mostly funnels to the Governors Ball next door. We also had tickets to that. It’s a pretty impressive party. Everyone who won an Oscar carries it with them all night, even the Daniel Day-Lewis types.

I thought it was curious to see which celebrities still managed to stand out in a room of celebrities. And the clear winner of the night was… Ben Affleck. From the moment he walked into the Governors Ball he was swarmed. He was swarmed the entire time he was there. And he was swarmed while he left. I’m afraid this means the past decade of Ben Affleck being a punchline is now over and he’s managed to re-elevate himself. (Of course, that does mean that he’s about 10 years away from the next phase: Total public image Cruise/Gibson/Travolta/Madonna meltdown. But for now, he should let the good times roll.)

At the Governors Ball, an army of servers kept everyone constantly plied with food. We tried almost everything, but when I was offered “spicy sea bass,” I passed. Didn’t sound good to me.

Unfortunately, I passed on it just as Wolfgang Puck was walking around… because he actually does walk around all night making sure people like the food. It reminded me of eating family dinners at my late grandma’s house where she monitored every bite I took and kept making sure I ate more and more and more.

Anyway, Wolfgang Puck saw and heard me turn down his sea bass and said, “Just try it.” I complied, tried it, and told him it was great. He was mollified and was off to check on other people. (I didn’t really like it. My first instinct was correct. But how often are you going to have Wolfgang Puck critically watching you as you eat his food, right?) 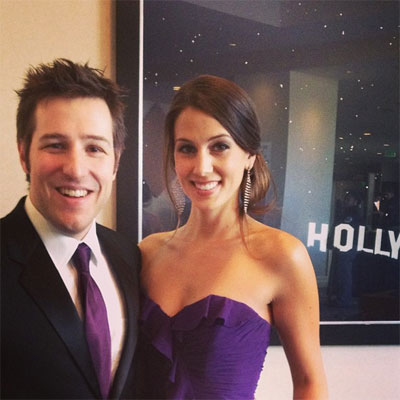 When I told people I was going to the Oscars, a lot of people responded with something to the effect of “That’s one off the bucket list.” I’d actually never really thought of it that way; it’s never been a goal or dream of mine to go to the Oscars. But having randomly wound up there — yes, it’s an absolute bucket list-worthy event.

Even after spending more than a decade in Los Angeles, and even with the requisite amount of blogger/outsider sarcasm toward celebrity culture and Hollywood self-aggrandizement, the event is just so massive and so impressive that you can’t help but get caught up in the moment. And even if I do go to the Oscars again one day, it won’t compare to this first time — when I kinda belonged there, tried my best to fit in, and was still wide-eyed enough to completely enjoy the hell out of it.