Last week I made my annual Super Bowl prop bets for real money. How did I do?

Last week, for the 10th year in a row, I made 11 ridiculous prop bets on the Super Bowl. I had high hopes, as always, that I could ride them to getting myself above .500 lifetime (and back into the black in terms of earnings). Did it happen?

2018 marks the first year for Puppy Bowl gambling, and I was feeling good about Team Ruff. Mostly because I figured there was no such thing as a “favorite” in the Puppy Bowl, but a bet on Team Ruff had a higher payout.

Turns out I’m the idiot, I guess. Team Fluff, the favorites, beat Team Ruff and I am now the guy who blew $11 gambling on the Puppy Bowl.

2 | How long will it take Pink to sing the National Anthem?

I am a huge proponent of betting the “over” on the National Anthem length, as it’s paid out for me repeatedly over the years. And with no history to work off (Pink has apparently never performed the song before), I went with my “over” roots.

Turns out I’m the idiot, I guess. Pink’s official performance clocked in at 1:53. A seven-second loss is the equivalent of a blowout when it comes to Super Bowl anthem times.

3 | Will Pink say “Eagles” before, during or after she sings the National Anthem?

Pink comes from a Philly suburb, so there was some speculation she might use her platform here to give her hometown team a shout-out. I bet on her professionalism, and guessed she would not. That was before I knew she had the flu, and was basically trying to get through this thing as quickly and smoothly as possible; extracurriculars be damned. Like, she couldn’t even think about mentioning the Eagles before singing because she had to spit out her lozenge.

4 | How many times will the word “Dilly” be said during the broadcast (including commercials)?

I figured Bud Light would use the grandest commercial platform of the year to solidify the past several months’ work of establishing “Dilly Dilly” as the next great advertising catchphrase. And lots of other people assumed the same — the sportsbook I used got so much action on over 12.5 Dillys that they eventually wound up pulling the bet off the board.

But… Bud Light only wound up running two commercials. In the first one, called “Pep Talk”, “Dilly” was said eight times. The second commercial was “Bud Knight”, where “Dilly” was said four times. Total of 12. The under pays. Damn.

Overall, it was a really disappointing showing by Bud Light. Those commercials, especially the minute-long “Bud Knight”, really just felt like Bart Simpson as the I Didn’t Do It Boy on the Conan show. Everyone was waiting for the catchphrase so all of the other material just fell flat. Bud Light’s results on the USA Today Admeter reflect the general meh of it all… the commercials finished in 18th and 25th place respectively. That’s a horrendous showing for, arguably, the Super Bowl’s most reliably popular ad brand.

5 | How many times will Trump tweet during the game?

I bet we’d get under 2.5 tweets. And when no one knelt to protest racial and systemic inequality during the National Anthem, my under bet became almost a lock. I thought he might go nuts when that Toyota commercial showed people being nice to an imam, or when a black player forced the key Tom Brady fumble, but who knows, maybe he was too busy mowing through a KFC 60-piece bucket to look up and notice. He only wound up tweeting two times on the entire DAY of the Super Bowl, netting me a hot $7.33.

6 | Will Donovan McNabb’s vomiting incident from Super Bowl 39 be mentioned during the broadcast?

I figured the commentators would refrain from addressing the urban legend incident from the past Patriots-Eagles Super Bowl, where Eagles quarterback Donovan McNabb allegedly vomited in the fourth quarter due to nerves and/or dehydration. And they did. Plus, it was the Patriots, not the Eagles, on a last-minute drive to try to tie the game in regulation. And we all know Tom Brady’s diet doesn’t allow him to vomit, when he’s nervous he just burps up three specks of lavender-scented almond dust.

7 | What will Justin Timberlake perform as his first song during halftime?

Presented with 15 choices, I definitely overthought this one. I went with Mirrors due to quite a bit of circular thinking. Justin went with Filthy, from his new album, as his opener — just one of the many questionable decisions in his performance.

The sad part is that he *did* eventually play Mirrors and do exactly what I predicted: “I could really see them wheeling out a bunch of mirrors to do some expensive choreography.” They had a bunch of people dancing with mirrors — just two-thirds of the way through the set, not at the beginning. How disappointing.

8 | Will any member of NSYNC appear to perform with Justin?

For one split second, I thought they’d just made a surprise appearance… 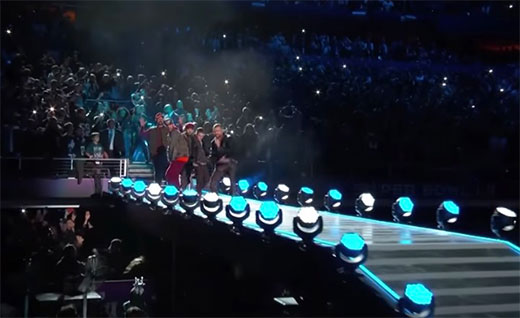 Nope. Just four random dudes straight out of Old Navy commercial central casting. Would it really have been that hard to bring the real NSYNC in for this? They could afford to project Prince onto a sheet but not bring in JC Chasez to do a few killer dance moves? Weak job, Super Bowl. But hey, good news for my bet. I won $3.93 since they didn’t show.

9 | How many total Anheuser-Busch commercials will air during the game?

I bet they’d go over 4.5. And while Bud Light only got two commercials (as per the Dilly disappointment earlier), A-B went pretty hard with its other brands. Budweiser oddly didn’t have a Clydesdale commercial but did an ad on how they canned water for disaster relief, Stella Artois had a Matt Damon commercial and Michelob Ultra had two Chris Pratt commercials. That’s six total commercials, giving me a nice $6.67 win.

10 | Will “Nipplegate” be said during the broadcast?

Obviously Nipplegate was not mentioned (winning me $1.22), as I knew it wouldn’t be. They were more likely to mention Colin Kaepernick kneeling on top of Ray Rice during a discussion about falling ratings while holding a deflated football and getting a concussion in the process.

This was a rough bet, as “no” wasn’t even offered, so I was forced to bet “yes.” I knew it was the long shot of long shots, and with the Patriots losing, the jersey couldn’t even disappear during a wild celebration. Plus, as I expected, the team was on the lookout for the missing jersey; this USA Today article even focuses on the team safeguarding the jersey to avoid a theft like last year.

So… ouch. I won the majority of my bets, but with their low payouts, I still lost $25.95 — my third-highest losses ever.

That takes my lifetime record on the bets to 50-53-7 and my lifetime losses are now at -$79.62. He couldn’t have just opened with Mirrors?