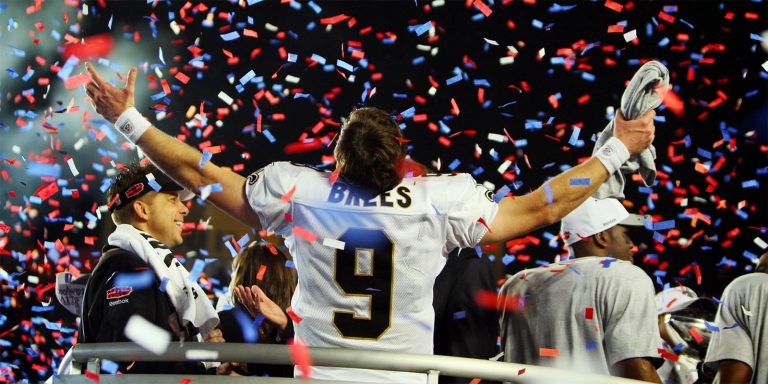 How did I do on my $121 worth of dumb bets on the Super Bowl? Surprisingly not THAT terribly.

Last week, I put up a list of 11 of the weirdest prop bets for Super Bowl XLIV — and, to raise the stakes (metaphorically and literally), I actually put $11 on each of the bets.

1 | How long will it take Carrie Underwood to sing The Star-Spangled Banner? (From starting note to last note sung.)

I bet the under, after watching several Carrie Underwood National Anthem performances — all of which clocked in under 1:42. This could not have been any more tense at my house as we watched yesterday — as the stopwatch ticked closer and closer, the panic level got higher and higher.

In the end, Carrie Underwood held that last note for a few extra seconds… and went over 1:42.

I thought I had this one. Almost all of the key offensive threats on the Saints have jersey numbers below 25.5, and a few Colts did too. It was a pro-Saints bet — I really didn’t think they’d be as nervous as they turned out to be.

As the first quarter wound down and Peyton Manning drove the Colts down the field, I knew I was in trouble. And when he hit Pierre Garcon (jersey number: 85) for the game’s first touchdown, I watched another bet drift away.

I’m sure someone else pointed this out before, but with Pierre Garcon on the Colts and Pierre Thomas on the Saints, this must be the first Super Bowl featuring two guys named Pierre. And both of them had receiving touchdowns. Lucky Pierres, indeed.

As the results of many of these wagers will show, the announcers really stuck to calling the game on the field. There weren’t celebrity sightings, replays of past games… or repeated mentions of Hurricane Katrina.

Ultimately, that lack of expected commentator word vomiting cost me… however, in this case, it was for the best. The phrase “Hurricane Katrina” was said, in its entirety, only once between kickoff and the final whistle, netting me a win of $13.20 on the under.

4 | Who will have more: LeBron James free throws made (at home against the Knicks on Saturday, 2/6) or Saints plus Colts first quarter points?

I guess when all else fails for me, I can make money betting against the teams I love. In Saturday’s game, LeBron destroyed the Knicks for 47 points (they don’t play defense, he likes the attention he gets from beating up on New York) — but only seven of those came on free throws.

I knew going in to the Super Bowl that, with the -1.5 spread, the Colts and Saints needed to score at least nine in the first quarter for me to win. And they did. I earned $9.57 on my $11 bet. Awesome.

5 | How many times will CBS show Kim Kardashian on TV during the game? (Live pictures only, kickoff until final whistle.)

Was Kim Kardashian at the game? I have no idea. I bet CBS would show her more than 2.5 times — I would’ve lost the bet if the over/under had been set at 0.5. Reggie Bush didn’t do anything notable during the game so there wasn’t really an organic moment to cut to Kim Kardashian.

It’s a shame. Maybe she would’ve been wearing something sexier than a GoDaddy tank top.

6 | Will they show a replay of [Saints owner] Tom Benson celebrating the missed field goal against Tampa Bay from the regular season?

This was supposed to be one of my “big” scores — also known as one of the few bets I made where my payout would be higher than my bet.

Unfortunately, despite three Saints field goals and one shot of Benson in his luxury box, CBS never deemed it necessary to run this clip…

So this was chalked up as yet another loss. I guess I shouldn’t be surprised — after that guy picked off Manning, they never even bothered to show a replay of him picking off Favre in similarly dramatic fashion from two weeks ago. The replay guy must’ve been asleep at the switch. (Or angrily looking through GoDaddy.com, slowly realizing the definition of “more” does not equal “nipples.”)

7 | How many times will Pete Townshend [of The Who] do his legendary windmill move. (Must be full 360-degree rotation and shown on TV.)

Now this one was embarrassing. I’d lost this one about four seconds into the halftime show. The official count was 10 full, 360-degree rotations shown on camera, but it felt like about ten times that. Pete Townshend is going to need rotary cuff surgery today.

8 | Who will the Super Bowl MVP thank first?

So this one was controversial. The first shout-out Brees gives is to God (completely defying what I predicted on Friday) — but he doesn’t thank God, he just says, “God is great.” After that he gives shout-outs to, in order, ownership, head coach, general manager and team. Never once does he say the word “thank.”

Almost instantly a debate broke out about this — did he thank God, no one or Jim Nantz first? And who better to settle that than the sketchy offshore sports book with whom I secured this $11 wager, right!?

It didn’t particularly matter to me — I lost no matter how it shakes out — but the official ruling was “no one.”

9 | Who will have more: Indiana plus Northwestern points (in their 2/7 college basketball game) or Saints plus Colts rushing yards?

So, as predicted, my Northwestern Wildcats won this game. (Not the state of Indiana’s finest day.) And, with a final score of 78-61 for 139 total points, they were right in the range I’d predicted.

Unfortunately, that meant, with the 65.5 spread, the Saints and Colts would have to total up 205 rushing yards. And, unlike Kilmer’s Coyotes, neither of the squads in question were a running team.

The Saints only put up 51 rushing yards; the Colts only 99. That would’ve been close without the enormous spread.

10 | Which Super Bowl commercial will have a higher rating on USA Today’s annual ad meter?

I finally nailed one. Thank you, Betty White, for carrying a Snickers ad to the top of USA Today’s 2010 Ad Meter. You just handed me my biggest win of the day.

I was fairly nonplussed by the commercials this year — I think my favorite one might’ve been the violin playing beaver — but that general mediocrity left the door wide open for my “field” bet to pay off. I won $30.25 on my $11 bet; in other words, the strategic use of one of the Golden Girls in a candy bar commercial basically saved my day.

It was my favorite bet of the day, and, somehow — I’m still not sure how — I won it. Reggie Bush felt basically invisible for the Super Bowl — but he managed to dig up 25 rushing yards and 38 receiving yards. Total yardage: 63.

Seriously. I have no idea. Every time he’d get a touch and seemingly go nowhere I’d throw up my hands in disgust and scream out, “Jesus, man!” or “What the heck!” or “For the love of Ray J, do something!”

I’m already excited to do it again next year.