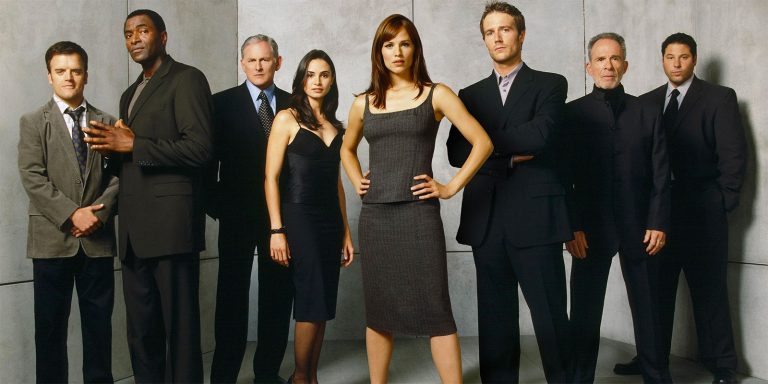 Characters on Alias should die every episode, but they never do. It would take these 11 signs for me to even entertain the notion that one of them was really gone.

I’ve been rewatching Alias lately. Loved it when it was first on; love it just as much now. It’s convoluted, over-the-top, absurd, frantic and has aged so-so. In other words, it’s wonderful. It also exists in a world where it’s borderline impossible for any major character to die. Basically, all of them should either be killed or kill each other every single episode, yet no one ever dies. Oh, you may THINK one of them died — nope.

So here are the things I’d have to see before I would believe a character on Alias was dead.

1 | The death must happen in a definitively fatal manner, like a bullet through the skull or a fall greater than 17,000 feet

A bullet anywhere else or a fall from any other height and I’m not buying it.

2 | We need a clear shot of the body on the ground, with no pulse, as certified by a reliable doctor not on the take

The body would preferably be mangled at this point — but not SO mangled that the person is unrecognizable. As soon as that’s the case, we know it’s a body double.

4 | The fingerprints would be tested as a basic measure

After double checking the fingers don’t have a thin film with fake fingerprint ridges on them.

5 | I’d like to see a definitive DNA test, to further prove the person didn’t do a Face Off-style transplant switch

The DNA swab could not be transported to a separate location for testing, as that would provide too much of an opportunity for shenanigans. I would like three different DNA testing companies to report to the scene and perform the test live. Those DNA testing companies would be randomly selected from a pool of at least 10,000 to make sure no one could get to the employees at all of them beforehand to coerce them into faking test results.

A trustworthy magician would also be on hand to make sure none of the above tests was cleverly swapped out using slight-of-hand. It would be preferable if the other characters didn’t know he was a magician and just thought he was an intern or something, because that might make them sloppier in their potential use of magic.

6 | Whatever test you can do to tell if someone is a clone — making sure they have a belly button? — would need to be performed repeatedly through the process

Half of them would be burned, the other half would be fed to wolves — who were then subsequently burned. I hate to have to kill a bunch of innocent wolves, but we can’t take chances here. The only part that wouldn’t be chopped up would be the head, which we need for ongoing death proof. The brain should be removed and chopped up, though, so it can’t be implanted into another body.

I need to make sure the “dead” person’s not pulling a Tom Sawyer and watching from above, below, behind a tree, a periscope in an adjacent grave or a nearby “Flowers By Irene” van. Allegedly dead people always tip their hand by staking out their own funeral.

Normally I do not support book burning, but I also don’t support wanton wolf killing. We have to make extreme exceptions here.

11 | And finally, an article in Entertainment Weekly would need to confirm the actor is really leaving the show

And after all that, I would give the character a 25 percent chance of actually being dead — a new Alias record!

11 Angry Birds Characters That Make Me the Angriest