Some towns are just more hardcore than others.

I’ve never lived in a place with a badass name. I grew up in towns called University Heights and Beachwood. Here in Los Angeles I’ve lived in places like Venice (named after Italy), Redondo Beach (“round beach”) and El Segundo (“the second,” since the second big Chevron plant was founded there). Not particularly intimidating.

Not like the places on this list — badass names all around. Not that “badass name” is really a top consideration for moving some place, but hey, meaningless accolades are still accolades. 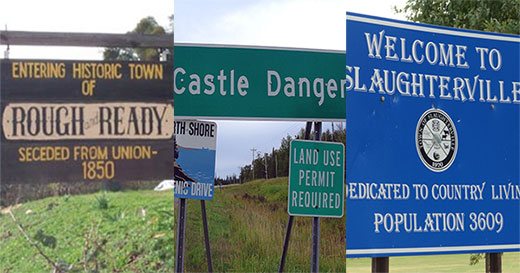 My mind immediately goes to the Ultimate Warrior. And while I’m doubtful the people of Alabama named their town after him (it’s more NWA country down there, Fabulous Freebirds and such), they really could’ve cashed in with merchandise during the ’90s.

Perhaps designating Bad Axe as “badass” is a little too on the nose, but I’ve lived my life through wordplay and I’m not backing down at this point.

I assume there are no dragons in Dragonville. Can you sue a town for false advertising? I mean, anyone can sue anyone over anything, right?

Fortunately, the town got its name from a local grocery store run by a guy named James Slaughter and NOT, as I feared, from some horrible atrocity. Thanks for that, Oklahoma.

It’s good to see monsters inspiring town names. Outside of this town, the most prominent entity inspired by a legendary creature was the Bigfoot monster truck. (Or maybe my Yeti microphone?)

Scarface is in the northeast tip of California and named after a local Native American chief who led the Modoc tribe in battle against the U.S. Army. And with all due respect to the accomplishments of a fictional character, that’s more hardcore than Tony Montana.

Any town with a name that sounds like it comes from an unapologetically over-the-top ’80s cartoon is good by me.

Take me to Bonesteel or go to hell!

11 Cities Whose Names Are Actually Misspellings