Not every town has a name fierce and intimidating.

Yesterday, I posted a list of the 11 U.S. towns with the most badass names. Today we go the opposite direction from Bonesteel, South Dakota and Scarface, California, because some people prefer sweet, fluffy clouds to not sweet, murderous clouds. 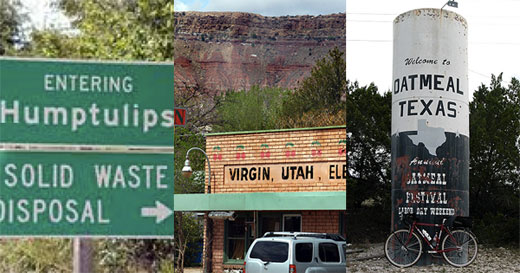 Here are my picks for the 11 U.S. towns with the least badass names…

How have the people of Bieber not (1) merchandised the hell out of their town name or (2) petitioned to have the name changed? Some city council member could really get his or her name on the national map by proposing a ballot measure. (Also, quick shoutout to Romoland, California. Pretty much the exact same boat.)

It’s like Wee Britain, but real. Although I searched and it doesn’t even have a Tim Hortons, so how authentic can it really be?

Got to give the credit to the self awareness of Utah — no state has a more relevantly-named town. Not even Indianapolis, Indiana or Oklahoma City, Oklahoma, whose names literally contain the name of the state.

At first I thought it was “Pottery Addiction, Ohio.” And really, it should be. At least that makes sense and might draw a crowd of people looking to toss a lil’ clay, fire up the kiln and just go nuts. As it stands, it’s just a somewhat confusing name that hedges in its devotion.

There was a Simpsons joke once where they showed a quick list of the worst cities in the country, one of which was Ebola, Michigan. And while that, sadly, just a fictional name, Lupus, Missouri isn’t.

There were a few towns named after bland foods, but Oatmeal, Texas wins for being the blandest. (But shout outs to Mayo, Florida and Prunedale, California — you were close.)

I’m assuming the pronunciation is “like” and not “lick.” Either way… so needy.

“Butternuts” sounds like an insult from the streets of New York, not a town upstate somewhere. It’s like, “Hey Tony, look at Butternuts ova here!” (I can assure you, that’s how all New Yorkers still talk.)

The imagination takes a pretty direct route to guessing how this town got its name.

I did a double take when I saw a town named Cheesequake, mostly because that’s also the name of the most underrated Dairy Queen Blizzard. But even ignoring that connotation, is there any natural disaster less threatening than a cheesequake? It’s like an earthquake… but instead of the ground shaking, watch out for rumbling cheese?