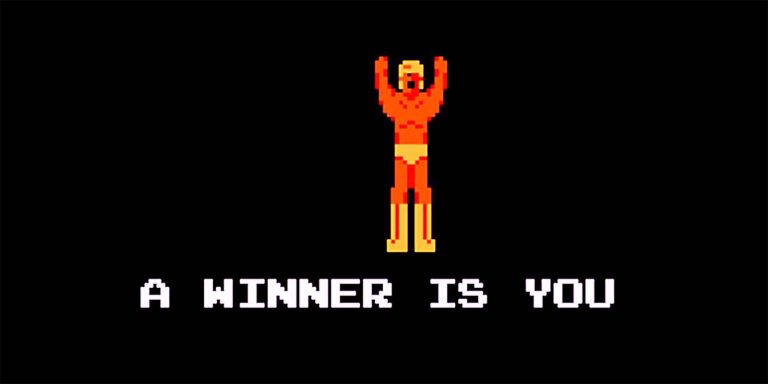 In the rush to get NES games from Japan to the U.S., not a ton of time was spent on the Japanese-to-English translations… leading to some great results.

I was playing the Wii Fit over the weekend, getting judged by the “game”, and I started getting nostalgic. My mind wandered back two full decades, to the era where Nintendo games couldn’t really judge you… because most of them couldn’t speak English.

Back in the original Nintendo Entertainment System (NES) days, video games didn’t have the quality control (and multi-million dollar budgets) that they have today. So as Nintendo insanely rushed to import all of their Japanese games to video game-craving Americans, often, the text in the game would be quickly and awkwardly translated to English. And no Nintendo higher-up ever bothered to intervene, so a ton of NES games ended up with horribly broken English.

For today’s list, I dug up the 11 most ridiculous Japanese-to-English translations in NES games. A winner is this list. 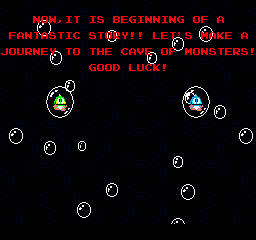 Now, it is beginning of a fantastic 11 Points. 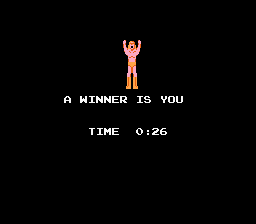 After you win a match in the legendary NES game Pro Wrestling, it tells you “A Winner Is You.” Which is an intriguingly zen (and extremely ego-boosting) way of saying “You are a winner.”

(Shameful plug! I once covered the A Winner Is You line in a video I made, when I found an old Nintendo Fun Club magazine that featured a Pro Wrestling high score from a young Kevin Federline.)

To beat Ghosts N’ Goblins you have to defeat Satan (and the entire rest of the game) twice. And both times you defeat Satan you get a message with broken English.

The first one — “This room is an illusion and is a trap devisut by Satan. Go ahead dauntlessly! Make rapid progres!” — contains a nice typo, classic Japanese-to-English abrupt sentences, and even a made-up word.

The second one contains a cringe-worthy “R”-“L” switch, plus one of my favorite sentences in NES history: “This story is happy end.”

From the looks of this image, that blue-haired princess may be ready to throw the guy down and go to town so that his penis is happy end. 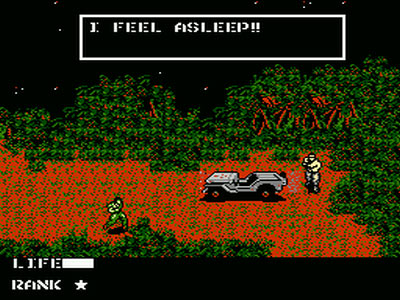 I played Metal Gear. And I assure you, this guy did not feel asleep. He FELL asleep, and then woke up — with all of his killin’ faculties rarin’ to go. 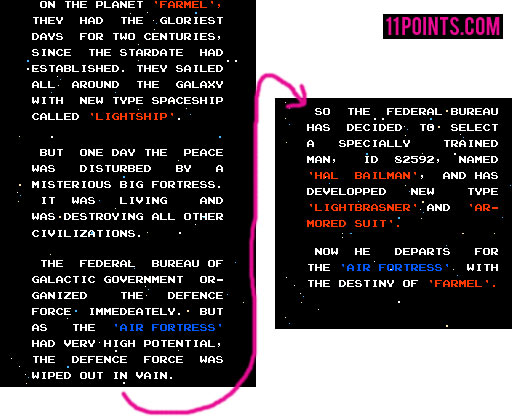 The beginning of Air Fortress unloads introductory back story on you like the beginning of a Star Wars movie. And even though they don’t know how to spell mysterious, developed or defense… even though every sentence is seemingly missing key words… and even though Hal Bailman is being equipped only with new type Lightbrasner and Armored Suit… I still find this opening exposition to flow better than anything written by George Lucas. 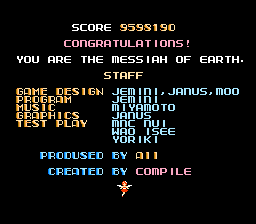 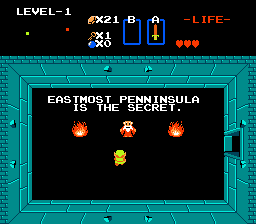 Almost all of the dialogue in The Legend of Zelda feels just a bit stilted, just, like, a half-step off. But the screenshot below is a straight-up typo in one of the five most influential video games of all time.

And also… the sentence makes no sense and provides a useless hint. (What he’s trying to hint to you is that, in the top, east portion of the game’s overworld, you can walk through some stones to get to a secret area. That info can NOT be gleaned from the clue “Eastmost Penninsula Is The Secret.” It had to be retrieved from Nintendo Power or, in my ultra-, ultra-nerdy case, from a Nintendo Usenet group that I frequented.) 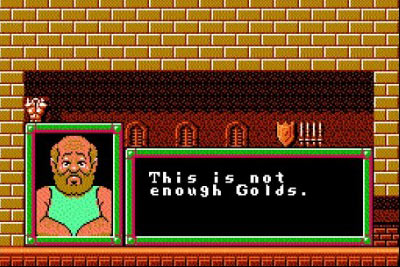 I have a soft spot for Faxanadu, which I played (and defeated) as a kid. I remember this message you’d get from shopkeepers throughout the game. I even debated writing in to Nintendo Power to tell them about this grammatical anomaly, but decided against it… instead, endeavoring to send Nintendo Power a photo of my amazing high score on Stinger. Which they never published. 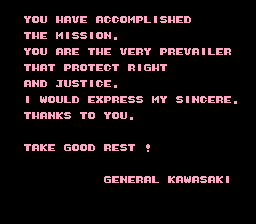 I’m pretty sure they didn’t bother to proofread this translation because they figured no one would ever see it. Ikari Warriors was effing impossible. I never came remotely close to being the very prevailer that protect right and justice, nor having a chance to take good rest. 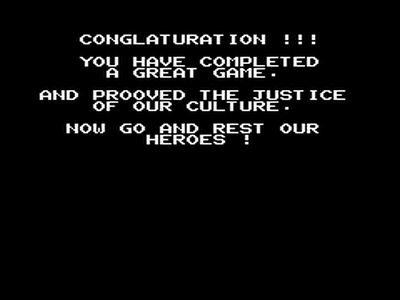 Double “R”-“L” switch, a misspelling of “proved” — and, on top of that, one of those classic Japanese messages of honor and valor that just become comical when translated into English. “And prooved the justice of our culture.” In Japan that probably made a lot of sense. In the U.S., I’m way confused. 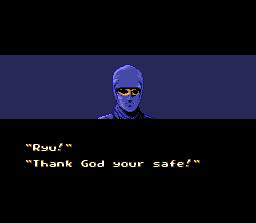 And there it is: Proof that Nintendo’s Japanese-to-English translators were the forefathers of today’s Internet commenters.