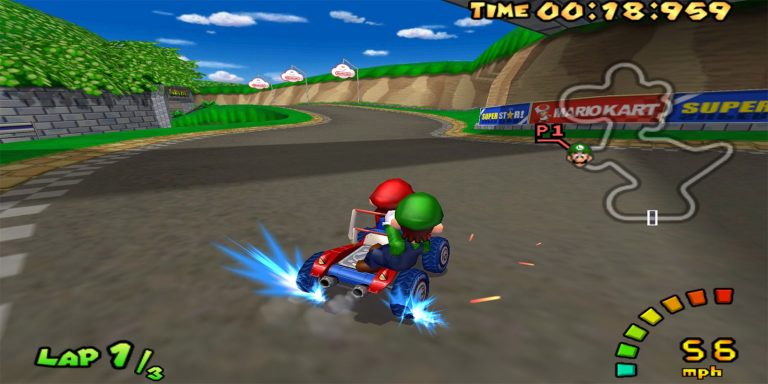 Just because Mario is in a game, there’s no guarantee it’s going to be good.

Yesterday, I put together my list of the 11 best Mario games ever. And for every best list, there should be a worst list. So that’s today…

Fortunately, the Mario Kart series hit perfection on the N64… which is why, after this disaster of a game, the series wasn’t officially dead. Because Double Dash was so bad that it would’ve killed off any lesser video game series.The crappiness of the game is outstanding. Firstly, their decision to put two riders in a Kart was terrible. Switching the riders was incredibly inconvenient and the benefits of doing it weren’t clear enough.

The tracks also suck — SUCK — with the pinnacle of suck being Baby Land or whatever it’s called where the track is just a tiny circle that you have to go around a ton of times. The programmers changed what happened when you hit someone with an item… instead of it being devastating, it was just a too-quick pause and then they’d be right back into it.

Of course, this becomes good when you’re the one getting hit… and the tracks get WAY too littered with stuff. There are far more items in this game… some of which are character specific… but they just have the effect of cheapening the game through over-saturation, not enhancing it. They messed up the power sliding from the N64 Kart game.

I could go on and on (and probably do an 11 point list on everything wrong with Double Dash) but I’m going stop here and just let the notion that this is the worst Mario game ever hang for a second in peace.

“Hey, everyone loves Super Mario World, what should we do for the sequel?” “I know, let’s make Mario a useless baby and make the entire game centered around controlling Yoshi!”

It was a good effort to move Mario into the Game Boy realm. But the game was just too short (only 4 worlds, and 12 total levels!) and it was incredibly difficult to control Mario (even by ’80s Game Boy standards). Of all the games in the Mario series, this one has aged the worst, hands down.

For those who don’t remember, back in the mid ’90s, Nintendo had the ill-fated idea to make a 3-D game system. So they made the Virtual Boy, which was a big red contraption you’d look into, and see kinda-3-D red monochrome graphics. The Virtual Boy was the biggest flop in Nintendo’s history and got discontinued after only one year.

Anyway, the game that came with the Virtual Boy was Mario Tennis. It was 3-D, but weakly. And it’s on this list because the action, frankly, was closer to Pong than tennis.

It was really, really, really easy to keep volleys alive forever until, ultimately, the computer AI would make an unforced error.The sad thing here is that the best game for Virtual Boy was a Wario game… called Virtual Boy Wario Land… and if the system had lasted longer, the developers probably could’ve made a really cool Mario adventure game using the technology.

I love Mario Golf: Toadstool Tour for Gamecube, and, as I said yesterday, I think that’s the best of the Mario-as-an-athlete games. This game was fun, but fails for one main reason: It’s WAY too easy. In general, the difficulty of golf games is entirely centered around their putting interface. Toadstool Tour gets it right: The game provides a grid that’s helpful in reading a green but you’ve still got to have steady hands and do some work to make the putt. Tiger Woods 2003 has a putting interface that’s almost impossible, which actually makes you give up on the game almost instantly.

Mario Golf: Advance Tour‘s putting interface, on the other hand, is SO easy that it makes the game much too simple. You never lose. You never even shoot close to over par, not even the first time you touch the game. The game makes it painfully obvious which way the greens run, lets you use a straight line to line up your putt, and then has a very forgiving power meter for how hard you hit those putts.

The thing that makes games good is when they’re challenging but, through skill and concentration, beatable. This one is just too easy.

This game, to me, proved that you can’t just slap Mario’s face on any piece of shit and expect it to be a huge hit. In this game, there’s a convoluted storyline where Bowser kidnaps the Princess or something and then transforms Mario into a pinball, so Mario has to go through different pinball machines to save the day. It’s as bad as it sounds.

I am a big Dance Dancer, and I was wholly disappointed with this. Mostly because it’s extremely easy. And because the songs are mainly music from previous Mario games lazily mixed with lame, generic J-pop beats.

8 | Mario and Sonic at the Olympic Games (Wii)

I haven’t played many Wii games, but I did try this one. And I got really, really, really bored really, really, really quickly. The events all suffered from one of two problems: The control was too unresponsive to the Wii remote… or the event was exactly the same as another event (like, for example, every track event being the same).

It’s frustrating because this was the first Mario and Sonic game and the first Wii Olympics game… and was a major disappointment for both.

This is the DS version of Super Mario 64, with some twists added. You don’t just have to be Mario (you can choose to play as Yoshi, for example, and use his abilities), and the red/green/blue cap system is gone.I thought this was going to work… but it didn’t. The game doesn’t feel right on the smaller screen and without the 360-degree joystick, control is hard. Using the stylus is also incredibly irritating and breaks up the game flow. I’ve tried and tried to enjoy playing this, but I just keep quickly giving up on it.

I guess I just never understood the Smash Bros. concept. I know it’s like Nintendo characters fighting in a sort-of Street Fighter style… but it never entertains me. I didn’t really like Street Fighter or Mortal Kombat either… something about those fighting games never worked for me. Maybe it’s all the non-stop little stupid moves you need to do before you can hit the 80-button combo to do the super-cool move.

Anyway, I’m putting this Smash Bros. game on the list because it was the one I was duped into buying.

I mean, Mario Teaches Typing was great… making a sequel was just Nintendo getting greedy. Mavis Beacon has a family to feed!