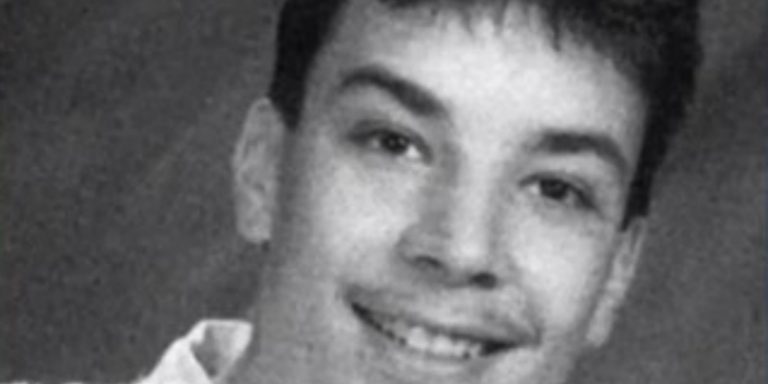 My 11 Yearbook Photos That Musicians Wish We’d Never Seen list is the second-most popular list I’ve ever done, so I guess this follow-up is somewhat overdue.

It’s not hard to find celebrity yearbook photos online, but I do find that the images are repetitive (there have to be at least 45,000 websites with the same yearbook photos of Brad Pitt, Angelina Jolie and Brad Pitt).

So I was on a mission to unearth some lesser-known yearbook photos of celebrities — the ones that are extra embarrassing. The ones that belie the actor’s public image. The ones that remind us that even some of the people often cited as the best looking in the world were just as awkward as we were. 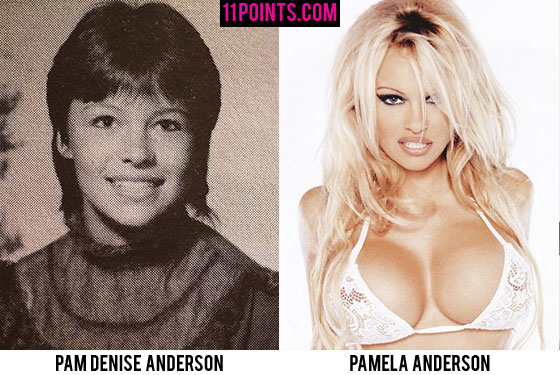 It’s amazing that this buttoned-down brunette from Canada became America’s most famous blond lifeguard. Not only that, but she pioneered the “parlay a sex tape into a new level of fame” model that dozens of other celebrities have since tried — AND she dated Scott Baio. Pretty much three-for-three on living the (North) American dream right there. 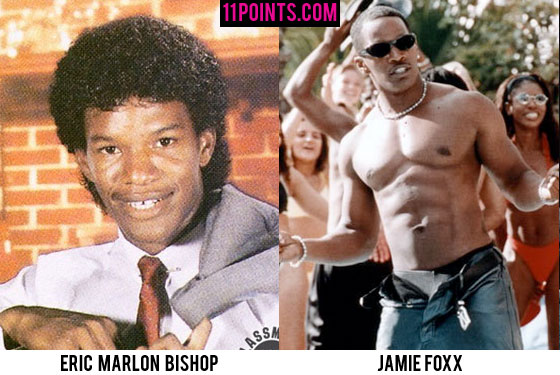 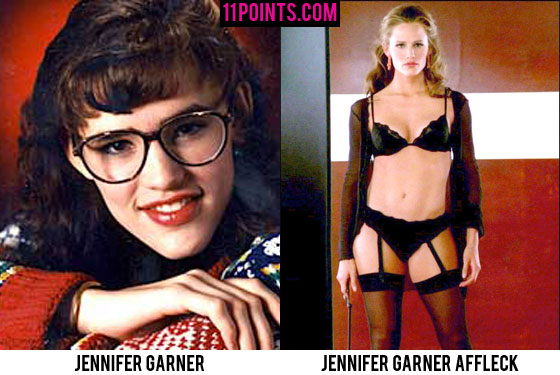 Ugly glasses don’t definitively ruin a person’s attractiveness level in their yearbook photo (see Charlize Theron’s photo below for proof of that). But Jennifer Garner with ugly glasses, big hair, awkward bangs, and a sweater that should only be worn for grandma on Christmas or by a comedian talking about his sitcom life with Theo and Rudy — THAT puts an irreparable mark on her attractiveness level.

I included a modern photo from when she was on a particularly exploitative episode of Alias — I believe it was the post-Super Bowl episode several years back where, for the first few minutes, all they did was parade Jennifer Garner out in different lingerie outfits. I miss Alias. 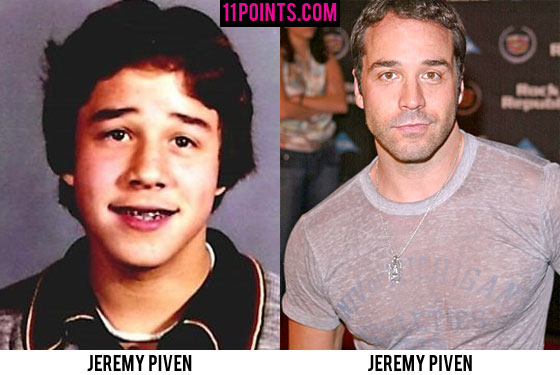 The giant mouthful-o-braces really makes him look like less of a dick. Also, as a child, I’d describe the look in his eyes as “desperate”… as an adult, I’d describe it as, “hey, fuck you, buddy.” 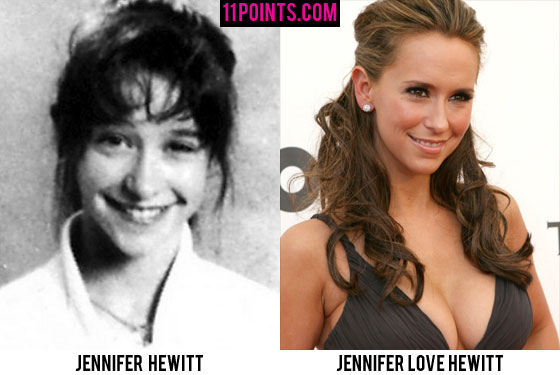 I feel like Jennifer Love Hewitt is one of those super hot celebrities who tells a talk show host, “Noooo, I was sooo dorky when I was growing up!” And… I guess she’s not lying. 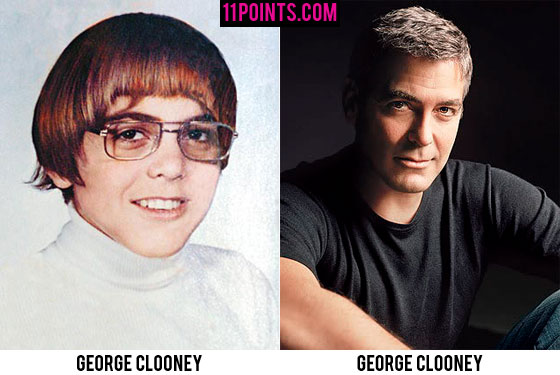 As I was preparing the images tonight (and searching for an “after” photo of Clooney), my girlfriend and I had the following exchange:

Sam: “George Clooney has a horrible yearbook photo but damn, did he turn out handsome.”
Angie: “Definitely.”
Sam: “If I had to nail one male celebrity it would probably be him.”
Angie: [completely unfazed] “Yeah, he looked really good in Up in the Air.”

I have reached the zone where there’s absolutely nothing I can say that will elicit a reaction from her anymore. 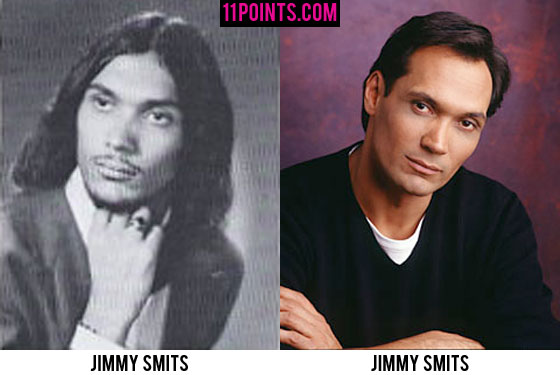 It seems that, even after decades of taking photos, Jimmy Smits still cocks his head at the exact same angle as he did when he was a long-haired, thin-mustached, creepy-looking high schooler. 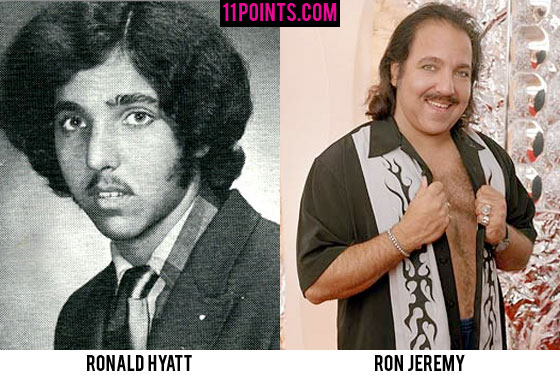 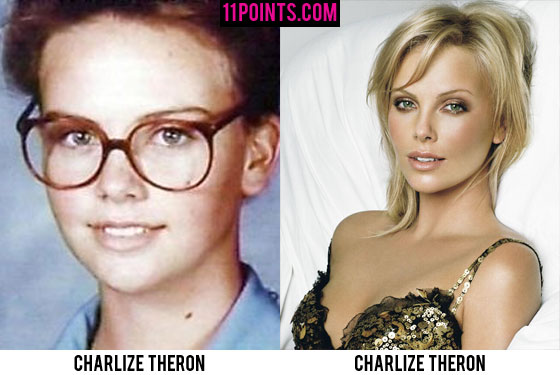 I mean… she’s just begging for the She’s All That treatment here, right? Everyone had to see that under her Sally Jessy Raphael facade she was beautiful. (Everyone, that is, except the jock who bets his friend, the sensitive popular guy, that there’s no way he could turn Charlize into the prom queen.) 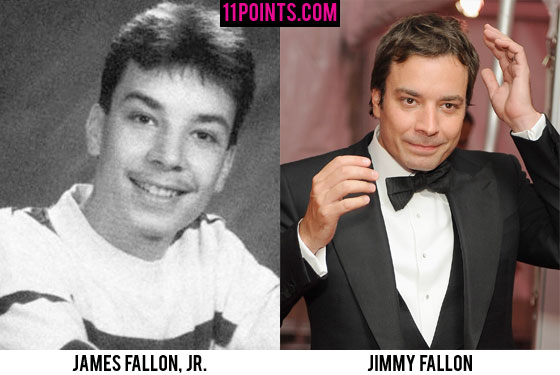 He was in high school for that brief, brief beautiful moment (the very early ’90s) when having a little dirt on your upper lip was a good look. That has never come back in style. 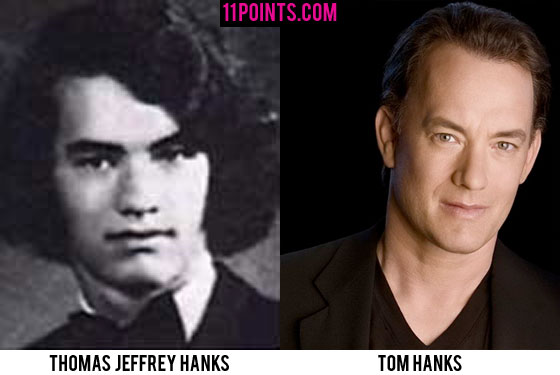 The saddest part of this photo? As brutal as his hair was in this yearbook photo — and make no mistake, it’s brutal — it still looks better than his hair in The Da Vinci Code.

And finally, I can’t, in good conscience, include her in a list with real actors, but here’s a must-see yearbook photo of Kate Gosselin of Jon & Kate fame… 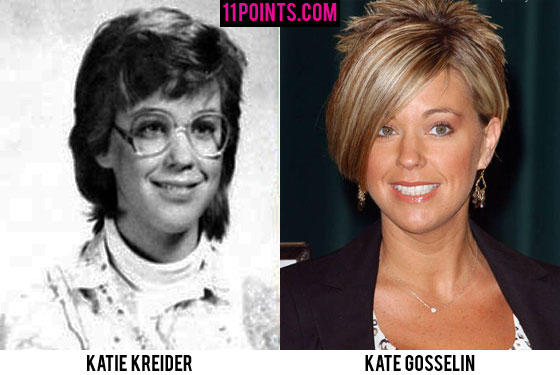