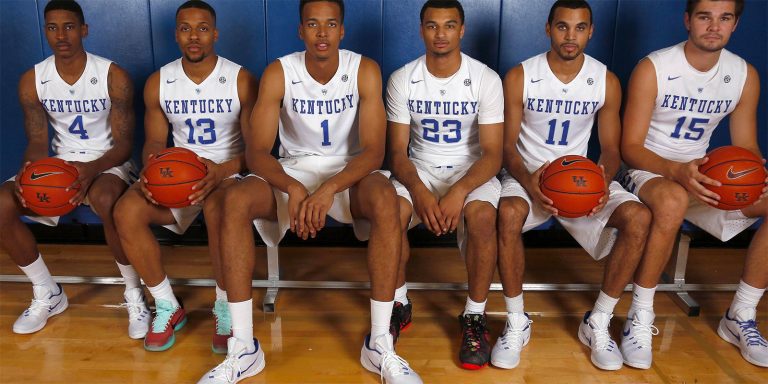 When there’s a college basketball team like this year’s University of Kentucky (or next year’s, which will be equally as good despite almost a 100 percent turnover in players), it’s inevitable that people will ask: Could an incredible college team beat a terrible pro team?

And now, for the longer answer…

Before I jump in — how incredible is it that the Knicks are the worst NBA team? The Philadelphia 76ers are outright tanking. They switched their logo to a tank. They make their players wear weights on their legs like they’re in Harrison Bergeron. And somehow the Knicks are worse.

RJ Bell is a Vegas handicapper — and you know if there’s a scorching hot take to be had, he’ll take it, because his Twitter profile photo is a screengrab of him on the Bayless & Smith Super Fun Time Show. But even he knows this isn’t the hill to die on. Here are his thoughts.

Great college team vs. worst pro team? Vegas estimate: #Knicks would be favored by 15 over Kentucky (played under NBA rules)

By the transitive property, that means a team like Golden State would be favored by around 170 over Kentucky.

Approximately 1.2 percent of NCAA men’s basketball players make it to the NBA. Even though Kentucky has become the de facto one-year layover on the way to the pros, there are still guys on the team who won’t make the NBA (or won’t stick once they get there). If you think back to the amazing college basketball teams in history, even they couldn’t place their five starters (let alone their bench rotation players) in the NBA. The Fab Five, those UNLV teams, the Duke teams — only a handful made an effective leap.

The pros run professional sets, they have professional coaches, they devote every day to maximizing nothing but their basketball skill and fitness and they play every night against other (often better) pros. I think I’d take the Knicks -15 and still feel pretty good. (A sentence that no one has typed since 1974.)

It’s such a relief to get to write this post and not have to feature the Browns. After next season, that won’t be the case. We suck a-gain.

PredictionMachine.com ran a simulation in 2013 of the then-top NCAA team, Alabama, against the NFL’s four 0-4 teams (Tampa, Pittsburgh, NY Giants and Jacksonville). The games were simulated at a neutral field using NFL rules.

All four NFL teams won at least 91.4 percent of the time against Alabama — and by an average of three touchdowns.

So we’d assume that in the Ohio State – Tampa Bay matchup, the line would probably be something like Tampa -18 to get action on both sides.

I think football is far more lopsided than basketball. The talent difference between college and pro is just too big; college players are usually big or fast, NFL players are simultaneously bigger AND faster. It’s why record-setting college quarterbacks, speedy college running backs and slightly undersized lineman are routinely devoured in the NFL.

Unlike the NFL and NBA, MLB teams actually do play exhibition games against college baseball teams. So we have real, not hypothetical, numbers to look at.

I’d say case closed — except that currently playing in the Small Sample Size Theater, the Philadelphia Phillies (one of baseball’s worst teams last year) lost an exhibition game earlier this month to the University of Tampa. University of Tampa is Division II; granted, the top team in Division II, but still, Division II. The Phillies also sat their best players and played it like MLB teams play exhibition games — to round out its big league roster, not to win.

Meanwhile, you have to assume the game meant way more to the guys on University of Tampa’s team. They’ll tell the story of this game for the rest of their lives.

There’s no advanced baseball stat for “trying” (unless someone’s figured out a way to calculate TryORP or ballpark-adjusted Effort+) — and therein lies the rub. MLB teams have only lost three of 67 games while, more or less, dicking around.

I’d even bet one of their Churro Dogs on it.

Alright. One more as a bonus.

Sure, Gwiazdowski is good and everything, but how’s he going to handle… a Perfect-Plex!