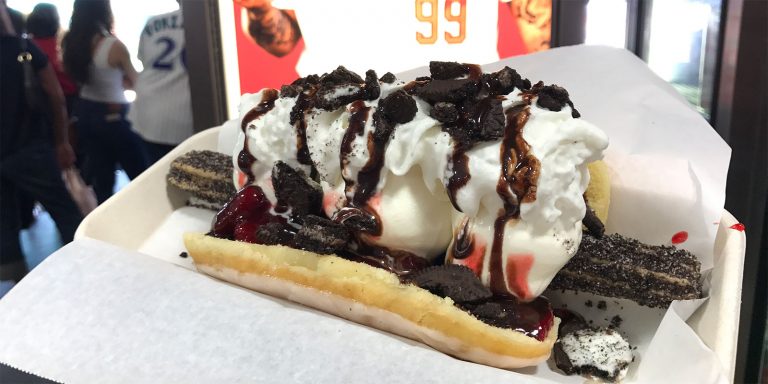 Two encounters in 14 hours with crazy food at Phoenix sports stadiums has made me question the workings of the universe.

“There’s no such thing as a coincidence,” some character has certainly said in some movie.

Well I say: Synchronicity, thy name is Churro Dog.

A text came in from my old college roommate Sam (yes, also Sam). He’s in Arizona right now for spring training. (As a friend of mine, he’s obviously there because he’s a front office stat guy, not a professional baseball player.)

Ok…so I’m not exactly sure what’s going on here but I was at the Phoenix Coyotes game tonight and they serve something called ‘The Penalty Box’ for $25 that includes what I suppose is a condiment called ‘BBQ Aioli Tobacco Onion’. If that’s not America then I don’t know what is anymore.

He sent me a photo of the menu, not the Penalty Box itself — he would later admit he took the coward’s way out and just got chicken tenders — and I’m glad he did. Because I searched the Internet, and there’s no trace of the Penalty Box anywhere else. Without that photo, I wouldn’t have any confirmation it was real and not just a glorious fantasy. 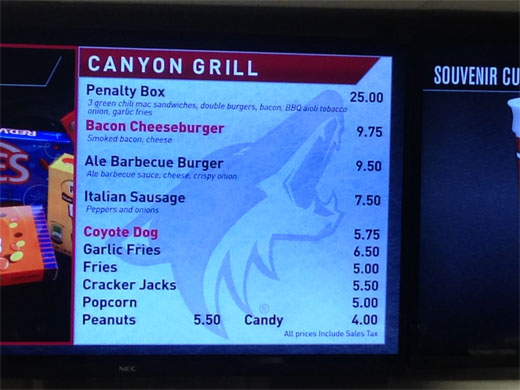 “Hmm,” I thought to myself, “Perhaps I should write something for my website about crazy stadium food. I’ll start with Phoenix because it looks like they’re nuts over there.” I made a quick note in Evernote, in the massive pile of germs of blog post ideas — alongside things like “Verne Troyer pictures” and “Bonk game on Nintendo, weird?” — and figured I’d eventually circle back to it.

New to Chase Field this year: the Churro Dog. pic.twitter.com/drUK3rITxX

Just 14 hours after I learned of the Penalty Box from the Phoenix Coyotes and considered a post on stadium foods centered around Phoenix, the Diamondbacks released that thing.

I stared at this photo for what felt like hours with but two thoughts.

One: When can I schedule a trip to watch the Diamondbacks play so I can eat that?

Two: Did I make the Churro Dog happen via synchronicity? 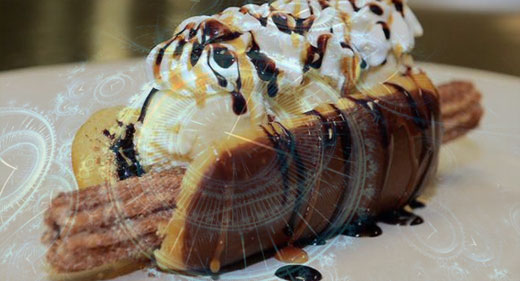 The answers are (1) maybe, like, June and (2) obviously yes. As that movie character said, “There are no coincidences.”

Oh, and hey universe, I’m currently thinking about writing blog posts about guys in their mid 30s spontaneously growing five inches taller. Can you get on that? If it means I have to eat a magic Churro Dog, so be it.