A Valentine’s Day story for the ages.

Sure, I *could* do an upbeat story about the power of love for Valentine’s Day (it’s a curious thing, after all). Or I could do what I usually do for Valentine’s Day — nothing at all. But I’m going with a third option: A story of the absolute strangest venue one could imagine for a break-up. Why is it good for Valentine’s Day? Perhaps it will make everyone else’s romantic disasters and foibles seem tame in comparison.

(Pre-story disclaimer: There’s no guarantee that any of the below is actually true; it’s possible someone created a bunch of fake Instagram accounts to perpetrate a hoax. But since I’m not sure what they’d get out of it other than lots of imaginary Internet points, I’m operating under the assumption of “real.”)

1 | It all started four weeks ago

When Burger King posted an Instagram photo of a breakfast sandwich, hash brown pogs and a coffee. By all rights, a completely forgettable entry into the voraciously insatiable monster known as “Content.” 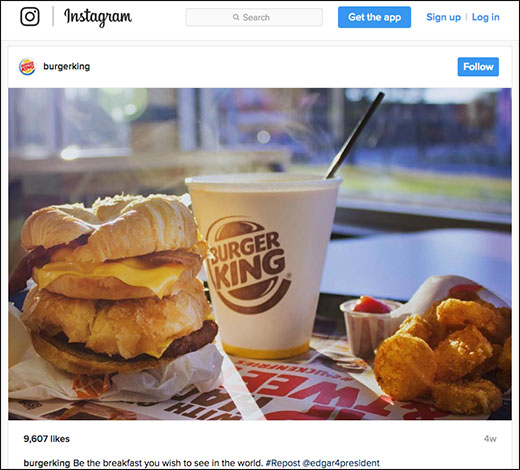 3 | And somehow, his girlfriend shanlee_rose quickly saw it too, and responded

Yes, it appears when jordan_vonsmith86 told BK about his visit with his “girl” the previous night, he was not referring to his girlfriend but another woman.

4 | shanlee_rose then tagged a few of her friends in the comments, and they responded by piling on about jordan_vonsmith86’s lack of integrity

One of them even implicated him in taking a different girl to see Rogue One. All things considered, this is turning into a decent advertisement for the guy; sure, he’ll cheat on you, but the road to infidelity is paved with sweet movie trips and patient consumption of Whoppers.

And clarified he was at Burger King with another girl, kitcass01, but only for “catching up.”

6 | Then a random guy interrupted the back-and-forth to implore Darius Rucker to get BK to bring back the TenderCrisp Bacon Cheddar Ranch, as one does

7 | Then *kitcass01* responded, washing her hands of the whole endeavor and totally sinking the alibi

If she did that in a court scene in Law and Order: SVU, the camera would immediately cut to Benson getting wide-eyed, mouth agape in disappointment/shock.

8 | shanlee_rose, despite now having kitcass01 as a de facto ally, attacked her anyway

9 | And then, in the final death blow, shanlee_rose dumped jordan_vonsmith86 right there in the Instagram comments section of a Burger King photo

It’s been a few weeks, since people don’t usually look for newsworthy happenings in Buger King Instagram comments, but still, the comments section on the photo has been sporadically populated with people discussing the realness/fakeness of the exchange. (Apparently they haven’t been following how the nebulous concept of “reality” works in 2017.)

11 | Finally, in case this does turn out to be a confirmed hoax, here’s its kindred spirit

A guy in France just sued Uber for almost $50 million after a “glitch” in their app led his wife to realize he was cheating on her. You know, because it’s their fault the marriage ended.

[Postscript note: Upon publishing and seeing the “related links” below, I just realized I also went after Burger King on Halloween. Oooh baby, can’t wait to see how I can jack them up on Flag Day.]