Can I Beat Super Mario Bros. With My Feet? 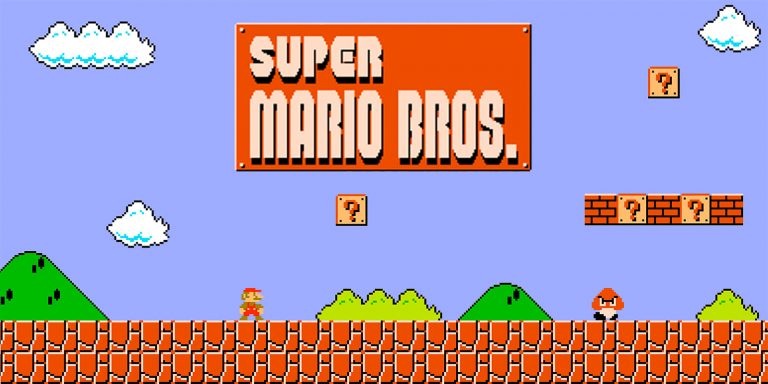 In the first post of the new 11 Points, I try to beat an NES classic with my feet and explain the change in the format of the website.

“Well, I’m in too deep now,” I thought as I delicately balanced my secondary camera in a roll of packing tape, almost an hour after beginning a quest that would consume more than five hours and an entire Saturday night, “I guess I’ve got to see this through.” 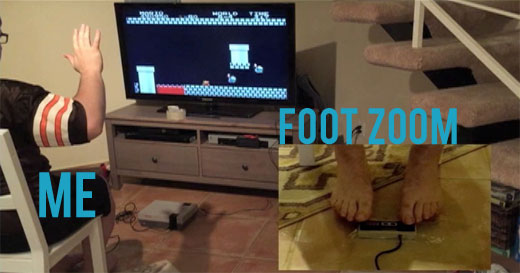 Back when I was about 12 (it’s a little fuzzy), I was in a friend’s basement playing the original Nintendo game Battletoads. After a long and frustrating afternoon, we managed to achieve mastery of a very difficult level where, if I recall correctly, you had to ride a jet ski through a field of lava, jumping and dodging throughout. It required some of the fastest reflexes of any video game we’d ever encountered to that point (and, quite possibly, would ever encounter in the future). But once we finally mastered it, it felt a bit hollow; there was a palpable sense of “Now what?”

So we decided to try to beat it using our feet.

I’m not sure who came up with the idea or why, but we put the NES Advantage joystick on the ground — that will be a key detail later — and began our efforts to beat it with our feet. It didn’t take long. The timing was in my muscle memory and my feet proved Kevin Baconingly competent. Within a few tries, I beat the hardest level in Battletoads with my feet. 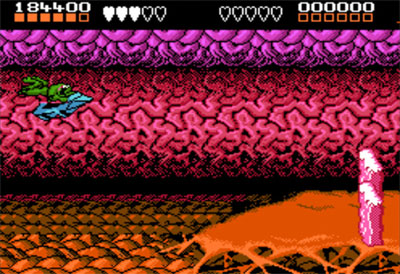 That was the last time we ever played Battletoads — but certainly not the last time we would try to beat games with our feet. A few weeks later, I beat Super Mario Bros. with my feet. It would be the only game I ever beat start-to-finish using just my feet.

That was more or less a lifetime ago. Over the course of the past two decades, occasionally a conversation would steer toward video game feats, and sometimes, when I’d remember, I’d wax eloquent about my Mario foot accomplishment like George Costanza waxing eloquent about Frogger.

And also like George Costanza, it turns out I couldn’t just let it exist in the past. That should’ve been a bad sign: When you’re doing what George Costanza would do.

Last weekend, I found myself alone at home on Saturday night. I discussed meeting up with friends later (I would not end up doing so — when they later found out why I’d gone off the grid, suffice to say they were nonplussed). My wife was out to dinner with friends — yes, if you’re reading this website for the first time, a lady actually married the guy who’s obsessively talking about playing video games with his feet back in the ’90s. And out of nowhere, the idea came to me: Feet. Feet. Feet. Feet. FEET. FEET. FEEEET. FFFFEEEEEETTTT! I decided to break out my old NES and give it a shot.

Fortunately, I’m a borderline hoarder when it comes to cords, so my NES was bundled with the AC adapter and RF switch. I plugged it in, blew on the Mario cartridge, hit the power button — and it was up. My NES Advantage joystick was ready to go. I wrapped the joystick between the big toe and second toe of my left foot, placed my right big toe on the “start” button and pressed down.

I did it again. Nothing again. I used my hands. Nothing.

My NES Advantage joystick was broken. And with it, my advantage was gone. I guess it’s not just a clever name.

I taped the controller to the ground, practiced for a while, got a feel for it — found that hitting B and A simultaneously was fairly tricky — and decided to take a real run.

I went upstairs, got the tripod and started configuring my setup so you could see the TV screen, the NES and my hands in the air. Then I configured my second camera so you could see my toes in action on the controller. This took at least a half hour.

Random side note — my wife, having hosted TV shows and via running her own YouTube show, gets emails regularly asking her to do various things with her feet. Foot fetish people are bold, unapologetic and weirdly specific in their demands. If she’d done this challenge, she probably would’ve made between four and 17,000 people’s dreams come true. My much less attractive feet will make no dreams come true.

Way too easy. Most of the levels in the game are pretty easy. I went through the game methodically — I wasn’t doing a speed run, just an accuracy run. In World 3-1, I carefully did a trick with some Koopa shells to get myself about 120 extra lives. (I would get into the specifics of why the game ends if you get more than 127 lives, but I think this post is nerdy enough without delving into integer capacity in database programming.)

I needed them. Once I got to the World 8, I started hemorrhaging lives. I had about 15 lives left when I finally managed to avoid dying for the 80th time in World 8-3. And then it was on to the final level.

It took me three lives just to figure out how to make the first jump. I blew three more on two bouncing Koopas toward the middle of the level. I got hit by a Cheep Cheep for the first time in 25 years of playing this game, losing another life. I had a couple of regressions and died early. But on my 14th try — with my wife home now, watching me and trying her hardest to remember to breathe in between statements of mockery — it clicked.

If you’re familiar with the game, if I’d gotten under that Hammer Brother and made the jump, I would’ve been facing Bowser. On the video, I declare it the best I’m going to do — and I was right. On my final life, after four hours of playing, I died on the first lava jump.

So I didn’t beat Super Mario Bros. with my feet. I’m thinking I probably could — it wouldn’t even take more practice, just more attempts — but I’m not going to do that.

Priorities shift. This wasn’t about becoming the world’s best NES foot player. It was just digging up something I used to love, something I still brag about and seeing if the skill and excitement would return.

Which, I realized several days later, is exactly why I’ve changed this website a bit. Over the past year, I’d lost a bit of the passion for writing 11-item lists. Sometimes I’d do a good one and it would still make me happy… I still loved having the website and talking about it… but I didn’t have that same passionate feeling I did when it started in 2008.

Lists on the Internet aren’t the same now as they were then; I started this before there was a Buzzfeed or an Upworthy or the word “listicle.” I don’t want to write lists and nothing but lists anymore. I want to write things I’m excited about. Sometimes that might still be lists but a lot of the time, it won’t be.

And I know it’s tricky changing course this way — again, not to belabor this accidental metaphor, I know my NES Advantage joystick is now broken and I’m entering uncharted waters using the regular controller.

Thank you for reading and I hope you’ll be around for many more posts to come.

Now that we’ve gotten that out of the way — wow, I have hairy big toes, huh?