The CFL made a three-year journey into the U.S. when one American team even won the championship. Then it all fell apart.

The Canadian Football League is arguably the number two professional football league in the world. (Number three if you count American college football as a professional league, which blah blah blah you know the talking points.)

But two decades ago, the CFL had visions of becoming even greater — and that meant going beyond Canada. Beyond the same eight teams playing each other over and over and over. Beyond Grey Cup match-ups between the Ottawa Rough Riders the Saskatchewan Roughriders. And that meant expansion into the U.S.

What happened next was a three-year tornado of hope, deception, excitement, disappointment, ambition and chaos. Here’s an 11-step timeline from start to finish.

The teams are the San Antonio Riders (they didn’t throw a “Rough” in front of “Riders,” at least) and the Sacramento Gold Miners.

The day the teams are supposed to be formally announced, the ownership group in San Antonio falls apart and the franchise pulls out of the league. That leaves Sacramento as the only American expansion team in the 1993 CFL season. They would go 6-12 but draw decent crowds playing at Sacramento State University’s football stadium.

The teams were the Las Vegas Posse, Shreveport Pirates and Baltimore [we’ll figure out the name later].

The Las Vegas Posse were doomed from the start, playing through the summer in the insane Las Vegas heat in a stadium in suburban Whitney, Nevada. Attendance was so bad by the end of the season that their final home game was relocated to the sweet cold of Edmonton. But their attendance failure wasn’t for lack of trying: They had cheerleaders called the Showgirls who had bikini contests at halftime.

The Shreveport Pirates were created out of half of the Ottawa Rough Riders. Ottawa’s owners wanted to relocate to the U.S., but the CFL didn’t want that and just split the team in half instead. Half stayed in Ottawa with a new ownership group, half went to Louisiana.

The third team was the Baltimore CFL Colts, bringing pro football back to the city of Baltimore which had been without since the NFL Colts bolted for Indianapolis a decade earlier. Unlike the rest of the expansion teams, they were a huge, instant hit. They averaged more than 37,000 fans a game that season, which was 20,000 more than the nearest American CFL team and 15,000 more than the Canadian teams’ averages. One big thing that helped their cause: They were, randomly, a really good team. 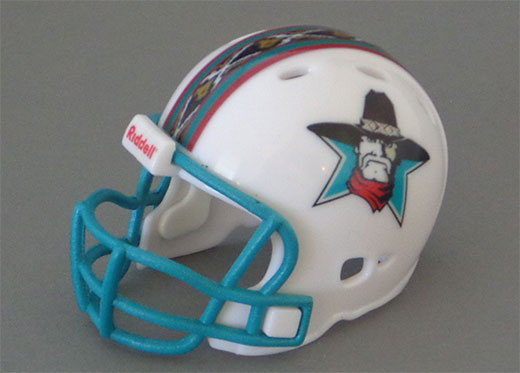 Before the season ended, the Sacramento Gold Miners announced they’d be changing cities before the next season. (They would move to San Antonio — the city they were supposed to enter the league alongside almost two years earlier — and become the San Antonio Texans.) Teams were already changing cities less than two years into the experiment. You know that’s exactly why Baseketball had to make its rules the way it did, right?

The 82nd Grey Cup featured a match up of the BC Lions and the Baltimore CFL Colts. Yes, in their first year, the Colts made it all the way to the championship. They lost on a last-second field goal. Still, they were such a bright spot that it looked like the American expansion had real potential, despite hiccups.

That potential would be accentuated when a new team, the Memphis Mad Dogs, were announced in November. The CFL was very excited to get into the wide open Memphis market. And yet another new team, the Birmingham Barracudas, opened in January of 1995.

But tension was starting to build between the American owners and Canadian owners. The American owners felt their attendance and popularity were struggling because of the unfamiliar rules of the Canadian game like 20-yard end zones and three downs… and they even proposed changing the name to something besides “Canadian Football League.”

Las Vegas tried to relocate to Jackson, Mississippi. The league approved the plan (twice), but pulled the plug at the last second each time when stadium deals fell through. There was also a near move to Miami, to become the Miami Manatees, but that collapsed as well. So the Las Vegas Posse wound up just folding after one season in the league.

Even without Las Vegas, the CFL now had five teams in the U.S., and they went all-in on the American expansion. They changed their divisions to North (the Canadian teams) and South (the American teams). Their playoffs would feature five teams from the North and three from the South. 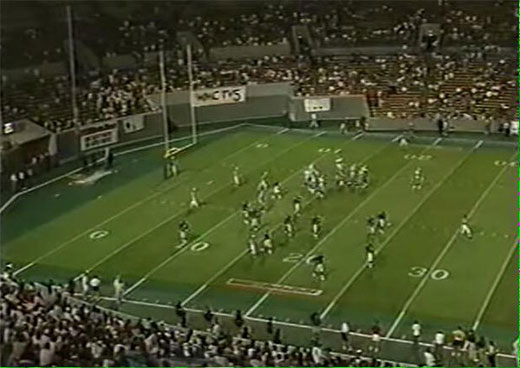 Despite the excitement over expanding to Memphis, there was a hitch. The Mad Dogs played in the Liberty Bowl stadium which didn’t have room for the 20-yard end zones. They had to turn the end zones into asymmetrical pentagons that were just feet from the stands. And, in reality, even those didn’t quite fit — in a Deflategate-esque scandal, it turned out the Memphis ground crew was making their yards 33 inches apart in order to squeeze in the whole field. 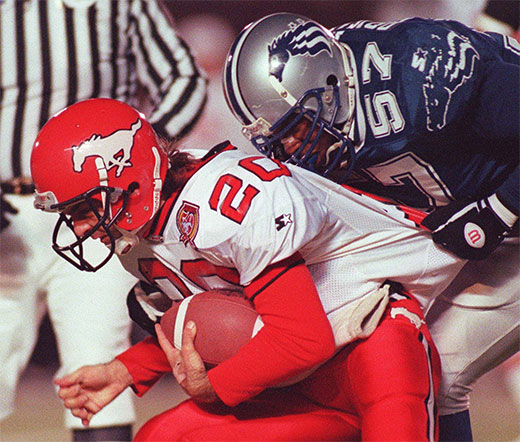 That Baltimore team was still good. Now called the Stallions, they once again led the American teams, made the playoffs — and won the Grey Cup. They beat the Calgary Stampeders (with quarterback Doug Flutie) on November 19, 1995. So yes, there was quite a bit of turmoil — teams folding, moving, almost moving, struggling with attendance and struggling on the field — but Baltimore was the bellwether franchise. As long as they were solid, the American CFL expansion had a chance.

But they weren’t solid. Because two weeks before that Baltimore championship, Art Modell, the owner of the NFL’s Cleveland Browns, announced he was moving his team to Baltimore. (P.S. What a dick.) And with an NFL team coming, Baltimore no longer needed a CFL team. The city’s enthusiasm for the CFL team plummeted, no one cared about the Grey Cup, and the day after the championship, Baltimore announced it was folding its franchise.

The dominoes fell almost immediately, and before the end of January, all of the other U.S. teams decided to fold. Some were hemorrhaging money because of poor attendance, some had lost deals with their stadiums and some were just so mismanaged that they couldn’t continue. The Baltimore Stallions, which were successful, did relocate to Montreal to become the Alouettes; the rest of the franchises disappeared.

And that was the end of the U.S. expansion of the CFL. The league was notably shaken after the smoke cleared, but managed to right itself thanks to a loan from the NFL in 1997, then lucrative Canadian TV deals in the 2000s.

The last player to play for one of the American teams was a quarterback named Anthony Calvillo, who played for Las Vegas, and retired in 2013.

And one more random fact: When Vince McMahon started the XFL in 2001, his teams in Birmingham, Las Vegas and Memphis played in the same stadiums that those cities’ CFL teams used. And things worked out just about as well.