There is a correct answer.

I received a message last week and I thought I’d respond to it in this public forum. Which easily beats my usual strategy of forgetting to respond at all.

I was waiting to get an iPad until Apple announced the next generation. They just did [ed. note – last Tuesday] and now I have no idea what to do … There are 17 different iPads on sale. I know you have one … and I was wondering if you had advice on which one I should buy?

And my iPad now serves two functions: (1) Watching streaming video in bed and (2) watching downloaded video on planes and sometimes hotels. That’s it. It’s purely a consumption device. As much as I tried, I never found any practicality in it as a creation device — no emailing, no writing, no social media, no photo editing, no video editing. It is not a laptop replacement. There are just too many deficiencies, from a lack of access to a file system to rudimentary-at-best multitasking, that cripple productivity. I use my phone for basically everything on the go, from emailing and quickly checking websites to playing games. The only areas where the iPad is truly superior to a phone or laptop, in my experience, is for watching TV and movies.

That isn’t meant to discourage anyone from buying it — “your mileage may vary” feels apropos here — but there’s a reason I haven’t upgraded in five years and feel no real need to do so.

While that describes my experience, I suspect most people will ultimately find the same: It’s a really nice idea to create content on an iPad but, ultimately, it’s mainly a thin, light, portable screen.

So let’s narrow down the multitudde iPad choices and pick the correct one. (There IS one answer, by the way.)

Here are the 17 different iPads that are currently on sale: 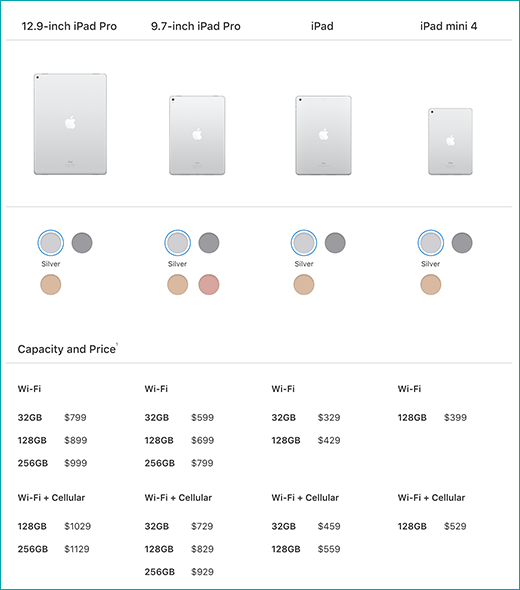 If you add in the color permutations, that takes us up to 57 different iPads, but I’m only focusing on functionality, not aesthetics.

First let’s get rid of all eight options that are WiFi + cellular. In the age of limited or faux-unlimited data plans, there’s really no need to get a separate plan for your iPad. If you need service on it, use your phone as a hotspot. It’s certainly not worth an extra $130 (plus the monthly costs of adding it to your cell phone account) to get it its own service.*

*-The caveat here is Sprint offers an unlimited iPad data plan for $20/mo. ($40/mo. for good speeds) for Sprint customers. So if you’re a Sprint customer, you see yourself using the iPad on a daily basis to watch streaming video (say, while commuting on a train), and you’re willing to commit $480 annually to that endeavor, iPads with 4G might work for you. But that’s an awfully long list of very niche conditions to meet. 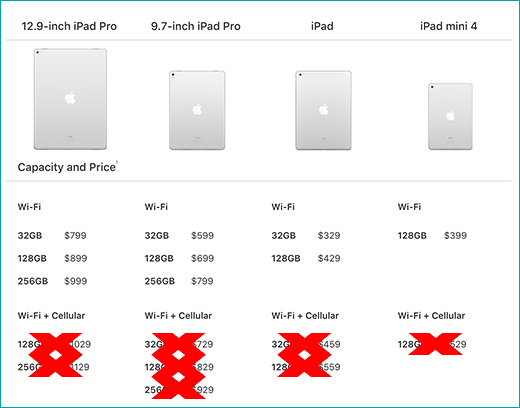 Second, we’ll get rid of the iPad Mini. It’s 8 inches x 5.3 inches. The iPhone 7 Plus is 6.2 inches x 3.7 inches. The justification for the entire iPad category is that its screen is much, much larger and more luxurious than a phone’s screen. The Mini’s screen is not large enough. It just exists in a tiny middle ground between a phone and a regular tablet that doesn’t need to exist. It’s too big to fit in a pocket but too small to provide a better experience than a phone. 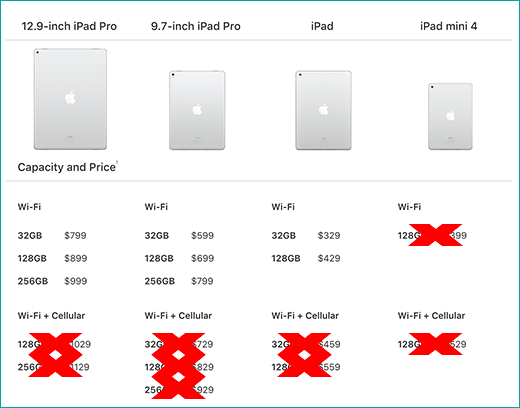 Third, we’ll get rid of the 12.9-inch iPad Pros. They’re enormous. Assuming you already have a laptop and want more portability, why buy something virtually with the same dimensions? (Sure, it’s thinner because it doesn’t have a keyboard, but only marginally. Apple’s thinness-above-all-else obsession has made even its most powerful laptops tiny.) The 12.9-inch iPads were created as part of the Sisyphisian quest to turn tablets into laptop replacements. As stated earlier, they just aren’t anywhere close yet — regardless of what the ads try to tell you. So you’re paying laptop prices for something without laptop capabilities. Plus, I already have trouble fitting my 9.7-inch iPad in bed along with a wife, 17 pillows and two small dogs. I can’t imagine trying to bust out an even bigger one. Much like the iPad Mini is too small, the 12.9-inch iPad Pro is too large. 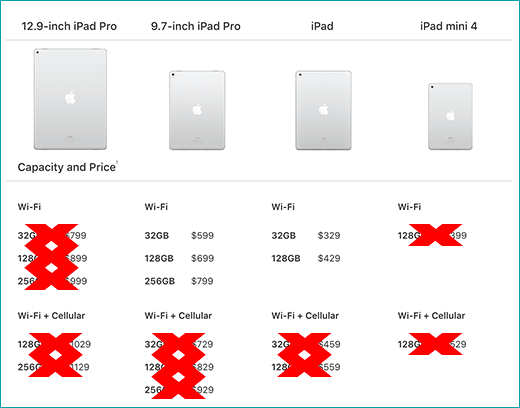 That leaves us with the two different types of 9.7-inch iPads. I’m going to get rid of the iPad Pros. Why? The differences don’t justify the several hundred dollar gulf.

The 9.7-inch iPad Pro and iPad have the same size screen and same resolution (which is, by far, the most important thing to consider). The Pro has a slightly faster processor. It has a slightly better camera which is genuinely useless — NO ONE takes photos with their iPad. Except these three people. 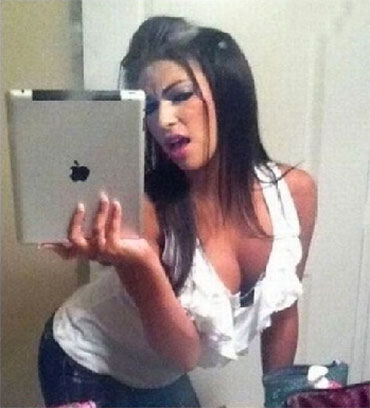 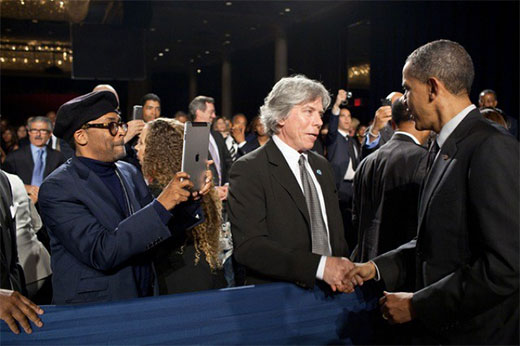 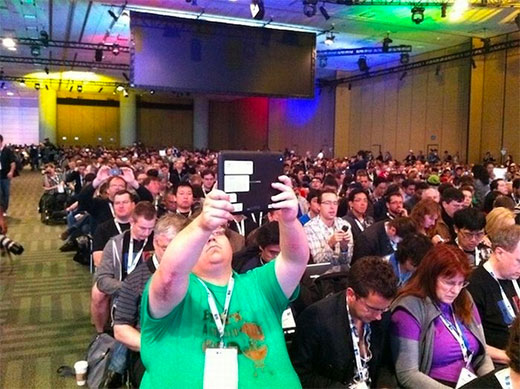 So other than slightly better spec bumps, what does the iPad Pro offer over the regular iPad? Only the Pro is compatible with Apple’s smart pencil and smart keyboard. You’re paying $270 extra for the ability to pay another $248 extra in accessories. And those accessories are cool. But styluses and keyboard cases aren’t exactly hard to come by. You can’t use the one Apple makes, but you can use any of the other thousands on the market. And, as I’ve stated before and I’ll state again, even after you buy them you probably won’t use them that much, because the iPad will almost certainly serve its primary function as a consumption device. 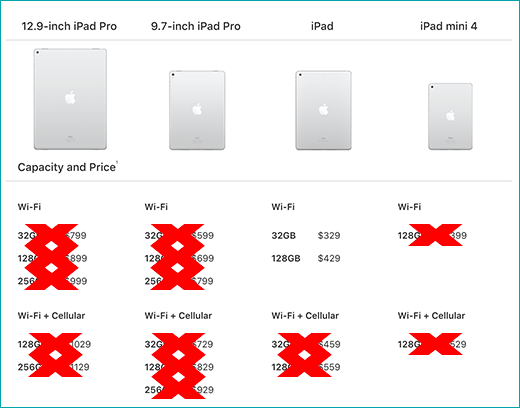 And finally, we’re down to two candidates that were just introduced on Tuesday: The 32gb and 128gb 9.7-inch iPad. It’s obnoxious to pay $100 for an extra 90gb of storage, considering what the components really cost. But I’m going to give the 128gb version the thumbs up.

My iPad is 32gb and it’s an issue before a long trip when I want to load it up with movies. After all the bloat and crap on my iPad, I can only hold about six movies at a time. It makes it quite tough to download a bunch of TV episodes to watch. It would be nice to have more space on it instead of having to constantly debate whether now is finally the time to remove MacGruber. But what if there’s a MacGruber emergency? I find myself pondering. You shouldn’t have to face that issue. 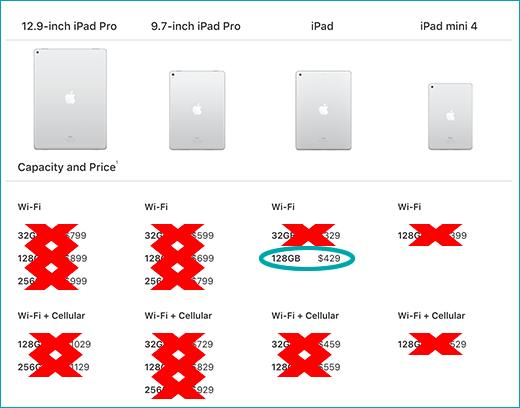 The verdict: Buy the 128gb iPad for a reasonable (in a twisted, Stockholm syndrome-y way) $429.