An analysis of which season of the two odder Community seasons felt a bit more off.

I just saw that the sixth season of Community, which was produced by and exclusively aired on Yahoo, is now going to join the rest of the seasons on Hulu. That should bring more eyeballs to it, since it was fairly tricky to watch before. (I had to do quite a bit of digging to find it when I went to watch; Yahoo didn’t quite have the destination viewing experience ready to go.) So I thought this would be a good time to do this list.

Community was a fascinating TV show, as much for the behind-the-scenes wrangling as the show itself. Its creator got fired, replaced, then rehired. It was the flagship (and then death knell) of Yahoo’s brief foray into streaming TV production. It violated every rule of modern broadcast television with a barrage of high-concept episodes. And, above all else, it was the post-Arrested Development unicorn that somehow managed to survive the chopping block not once, not twice, not thrice, not fourithe, but fiveithe.

The final ax, from Yahoo, was the last one. (I mean, probably.) The cast has all moved on — those that hadn’t moved on long before — and the likelihood of “#andamovie” joining the “#sixseasons” seems like a distant pipe dream at best.

I didn’t watch the sixth season on Yahoo when it was on — I’m a bad binge watcher and just didn’t feel the sense of urgency — but I finally checked it out last month. I watched it all the way through twice. And, like expected, something just felt a little “off.”

Now… this wasn’t the first time that happened. The fourth season of Community on NBC was the one where the creator, Dan Harmon, was fired. And while many of his writers remained, much of the season didn’t feel right. And when Harmon came back for season five, he so loathed the fourth season that the characters often referred to how everything was crazy the year before because there was a gas leak.

But did the fourth season have a stranger vibe than the sixth season? I didn’t think it was a slam dunk either way, so I figured I’d break them down into 11 component parts to figure it out. Warning: SPOILERS ABOUND

Season 4: No Dan Harmon (but much of the original writing staff)… aired Thursday nights on NBC.

Season 6: Had Dan Harmon (but virtually none of the original writing staff)… aired Tuesdays on Yahoo Screen.

Which felt more “off”? Season 4. It’s close, and the jump to watching on Yahoo was very weird, but season 4 suffered too much from not having Harmon. It felt more like a Harmon impression, but not a spot-on one. Kind of like when Fred Armisen played President Obama for an entire SNL season. 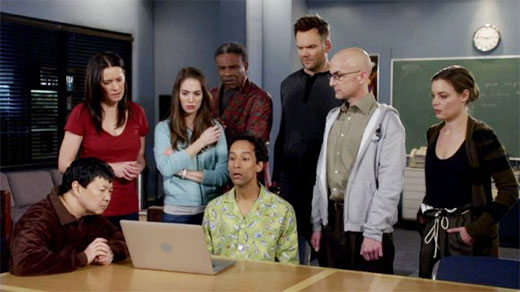 Season 4: The full original cast (minus Chevy Chase for the last few episodes). Most of the key recurring guest stars were also available, although clearly John Oliver didn’t want his fingerprints anywhere near that crime scene.

Season 6: 4/7ths of the original crew, plus the Dean and Chang. Chang, from start to finish of the series, was like a cockroach that wouldn’t die. Season 5 replacement crew member, Jonathan Banks, also didn’t come back.

Which felt more “off”? Season 6. It’s jarring in the opening credits to see so few of the originals’ names, and that feeling continues throughout the season, even with the two replacements.

Season 4: “Herstory of Dance.” Britta accidentally confuses Susan B. Anthony with Sophie B. Hawkins and throws a dance in her honor; Abed takes two dates; Brie Larson’s character is introduced.

Season 6: It’s a tough call, but I’ll go with “Wedding Videography,” where the gang makes Garrett’s wedding all about themselves in one final burst of codependent self-importance. It’s almost like the show’s final doctoral thesis on how the gang lives in their own world, seeing all others as planets orbiting their collective sun. The runners-up are episodes about a grifting class at Greendale that turns into an homage to The Sting and a crisis management episode over a City College attack ad about Greendale giving a diploma to a dog.

Which felt more “off”? Season 4. There weren’t many candidates for best episode, whereas season 6 had three I felt the need to mention and a few more I could’ve. And the essence of Community is a bunch of very memorable episodes. 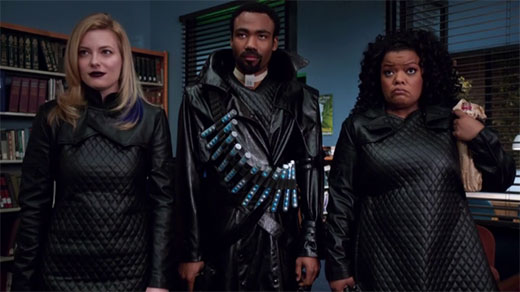 Season 4: Tough call for me because the “Changnesia” subplot is my least favorite in the entire run of the show. But I still have to go with the final episode, “Advanced Introduction to Finality,” which didn’t need to exist and focused exclusively on the “darkest timeline” (my second-least favorite subplot of the show). But it gets the vote here because it was created with everyone full well knowing it could’ve been the series finale, which would’ve been a true shame.

Season 6: The runaway pick is “Law of Robotics and Party Rights,” an extremely uncomfortable episode about prisoners attending Greendale via iPads on modified Segways. The rivalry between Jeff and one inmate isn’t just not funny, it’s downright depressing with no redeeming outcome.

Which felt more “off”? Season 4. Although that season 6 episode is bad enough that it made this close.

Season 4: Abed picturing the group in a sitcom with a laugh track… the documentary-style episode on Changnesia… and the episode where the characters were all puppets.

Season 6: The grifting episode… and the documentary-style episode on Garrett’s wedding.

Which felt more “off”? Season 6. Season 4 took more high concept swings, and the puppet episode had its moments (I really liked the song with Sara Bareilles). 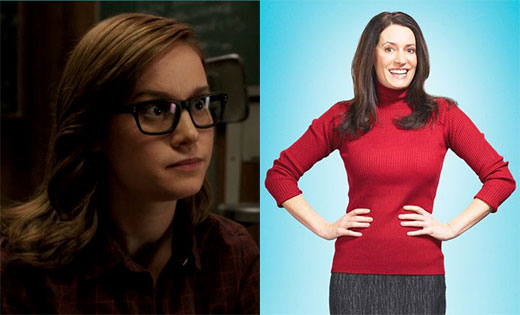 Season 4: Rachel, played by Brie Larson, as Abed’s new girlfriend. It’s clear she’s really good, since she’s one of the only elements from season 4 that made it into season 5.

Season 6: Frankie, played by Paget Brewster. I like her slightly more than Elroy as a new member of the gang, mainly because she rarely strays from her role of an outsider commenting on the absolute lunacy of the group and Greendale. (At least until she’s indoctrinated and seamlessly becomes one of them.)

Which felt more “off”? Season 6. Bringing in two new members to sit around the table just served as a constant reminder of how strange it looked.

Season 4: Annie confessing to letting their professor rub her feet for a better grade. That didn’t fit the character, or the overall vibe of the series, and was never mentioned again.

Season 6: Annie and Jeff’s final kiss. I’m not sure why the show felt the need to have their six years of friendship with occasional (and often creepy) sexual overtones culminate by leaning into the creepiness.

Which felt more “off”? Season 4. At least the final kiss made a tiny bit of sense.

8 | Thing that felt least true to the characters

Season 4: Take your pick: Troy and Britta dating, Jeff meeting his dad, some of the group members’ terrible confessions or everyone going along with the idea of keeping their professor tied up to try to get a better grade. Actually, I’ll make the pick — it was tying up the professor.

Season 6: Abed completely transitioning into a place of genuinely dislikability. He went from “sometimes high maintenance guy on the Autism spectrum” to “mean for the sake of mean.”

Which felt more “off”? Season 4, because the character betrayals were fast and endless. 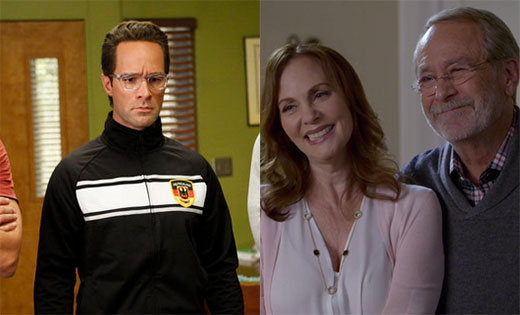 Season 4: I didn’t like Malcolm McDowell as a creepy professor, I didn’t like Toby the Inspector Spacetime fan, I didn’t like James Brolin as Jeff Winger’s dad, but I really didn’t like Chris Diamantopoulos the gang’s new German rival. Oh that accent.

Season 6: There were a few really rough minor characters, like the insult comedian Gupta Gupti Gupta, but I’ll go with Britta’s parents. They were introduced out of nowhere and were far too predictable in their excessive kindness. Martin Mull still hasn’t recaptured the glory of Gene Parmesan.

Season 4: Changnesia, the obsession with Inspector Spacetime, and the obsession, sometimes seemingly without full comprehension, of the darkest timeline.

Season 6: The show without so many of the original cast members.

Season 4: Abed figuring out the group’s origin story and how all their paths were intertwined, which featured way, way too much retconning for every single character. (And a sad Chevy Chase body double.)

Season 6: It was never quite clear what was motivating the characters all season. The first four seasons they were students; the fifth season they were a committee to save the school. Since they accomplished that mission, season 6 kinda sorta reintroduced that mission, but it never really stuck.

Which felt more “off”? Season 6. It was nice having four of the original characters still together, but it suffered without any endgame really driving things.

Season 4 had a stranger vibe, but only by the slightest 6-5 margin. And if you watched Community, I’d like to discuss it, since literally no one I know has watched all six seasons.

11 Thoughts on the Unauthorized Saved by the Bell Story