A guy was just caught trying to return tens of thousands of out-of-state bottles in Michigan — and the penalty is shockingly severe.

There’s a famous Seinfeld episode (pardon the redundancy, since most of them have achieved that designation after two decades of nonstop syndication) where Kramer and Newman try to execute the Michigan bottle deposit scam. 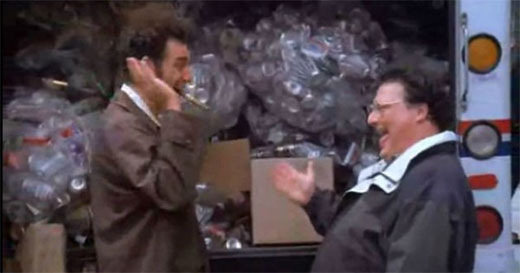 As a refresher, Michigan pays 10 cents per can or bottle returned. That’s the highest rate in the country. Of course, when you buy cans and bottles in Michigan, you pay that 10-cent deposit — so technically you’re getting a refund, not free money. But if you bring in cans or bottles from out-of-state, then, yes, free money.

Thus the temptation to import massive quantities of bottles to Michigan to return them, 10 cents at a time.

When Kramer and Newman attempt the scam, they first focus on the logistics — and how it’s virtually impossible to make the numbers work. Between truck rentals, tolls, gas and acquiring cans, it’s hard to make the venture profitable enough to be worthwhile. (They do eventually crack the code, by using Newman’s mostly-empty mail truck making a Mother’s Day run, but find themselves derailed in the end.)

So, why talk about all this now? It’s because a guy just attempted the Michigan bottle deposit scam. And it turns out Michigan takes it very seriously.

I assume he checked the numbers and felt like it was worth it. What he didn’t check was the law.

As a Class E felony, it’s the equivalent in Michigan of carrying a firearm or dangerous weapon with unlawful intent, first degree retail fraud and home invasion. It’s considered a worse crime than domestic assault, and only one step down from human trafficking. Don’t mess with Michigan’s bottles.

And poor Brian made the mistake of speeding in his rental truck. A cop pulled him over, saw the bottles in his truck and became suspicious. An investigation uncovered his plan, and he was arrested and charged with one felony count of beverage return of non-refundable bottles.

He was in court this week and pleaded not guilty.

And once again, the Michigan bottle deposit scam is proven to be fool’s gold. I just never knew it was fool’s gold that could get you thrown in a state prison for half a decade.

This Weekend Saw Bloody Fights Over iPhone vs. Android AND Jordan vs. LeBron

11 Fake Movies From Seinfeld That Really Need To Be Made