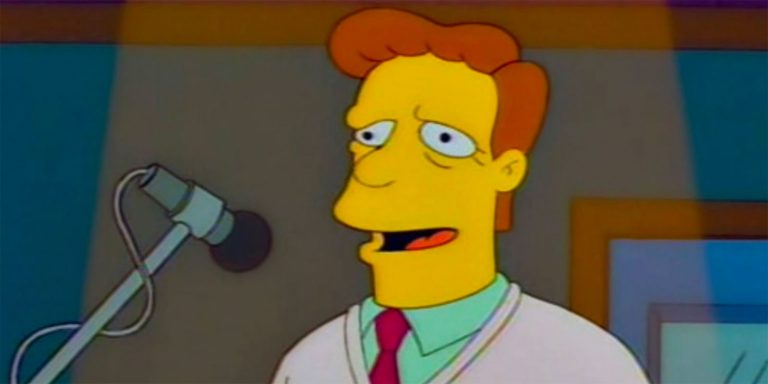 Troy McClure always recites resume items from his rich filmography. Here are some of his best roles.

This is a long, long overdue spin-off of my October 2008 list of 11 Fake Movies From Seinfeld That Really Need To Be Made.

About a year ago, in the comments on that list, apes224 (his/her birth name, obviously) suggested that I do a list of the best Troy McClure movies from The Simpsons. “That’s a good idea,” I remember saying to myself at the time, “I should do that.” And now I am. The turnaround time isn’t great, but, ya know, at least I move faster than Congress! Am I right? Ladies?

For those who are lost and saying “What the hell is Troy McClure and, on a related note, what the hell are you talking about?” here’s what’s going on. On The Simpsons, the late Phil Hartman played a classic character named Troy McClure — an actor who never met a movie, TV show or infomercial he wouldn’t do. Kind of like Eugene Levy.

Whenever Troy McClure introduces himself, he says, “You may remember me from such movies as…” and then lists a few ridiculous titles. I went through those titles and picked my 11 favorites. 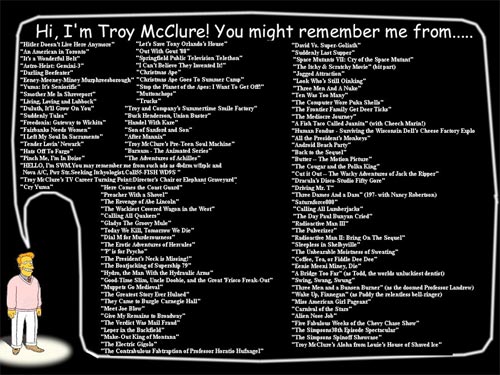 Well, 11 of my favorites. It was almost impossible to narrow this list down.

Does lead paint taste better than regular paint? One day I plan to take a trip to former Soviet republics and lick a bunch of toys so I can find out.

Ah yes, the sequel that has to make a huge stretch to follow up the original premise. These Christmas Ape movies join the proud tradition of the Die Hard franchise… Home Alone 2… Blair Witch 2… and the most egregious premise stretching sequel of all, Speed 2: Cruise Control.

The sad part? If someone wrote a self-help book and gave it this horrible title, it would probably hit the bestsellers list. People love being told they’re idiots. But only by books, for some reason.

If you Google “silent killer,” that tagline has been assigned to everything from hypertension to diabetes to carbon monoxide to cancer to debt to STDs to dirty water — basically everything BUT firecrackers. Although they could be silent killers if you’re deaf. Or if a ninja sneaks up behind you and wallops you in the head with some.

Troy also says he appeared in Dial M For Murderousness — that’s good, but P is for Psycho is better. It manages to send up Sue Grafton and the nuances of English.

7 | Alice’s Adventures through the Windshield Glass

Sure, technically Alice’s Adventures in Wonderland and Through the Looking Glass are two separate books that were liberally blended for the parody here. Then again, the Johnny Depp movie version of Alice in Wonderland takes place in Underland and was liberally retrofitted with 3-D to jack up the ticket prices — so Troy McClure doesn’t look so bad in comparison.

8 | Man Versus Nature: The Road To Victory

It’s perfect. Reminds me of the t-shirt Homer wears in Brazil that says “America: Try and Stop Us.” That’s so good I completely ignore the “try and” usage. (Although that has stopped me from actually wearing the shirt myself.)

10 | Leper in the Backfield

This, I guess, would be the straight-to-video follow-up to Angels in the Outfield. And also probably involve the running back fumbling his arm. And maybe Danny Glover. And definitely Tony Danza.

I’m mostly surprised at how this title had sneaked into my day-to-day vernacular. I regularly talk about negative fun. Someone needs to coin a term for when you quote a TV show or movie so much that you forget one of your key figures of speech is a reference. Referenesia? Allude-Me-Not? Quotezheimer’s Syndrome?

OK, so I missed your favorite. I’m ready to hear it.