3-D is all the rage right now. But there have been attempts for decades to get it to take — and it never does.

3-D has become the Blob — it just keeps getting bigger and bigger and there’s no sign it’s ever going to stop. Of course, 3-D isn’t new — people have been trying to make two dimensional images “come to life” since cavemen used one-point perspective to make it seem like woolly mammoths were trying to plow out of the walls. At least I assume.

I like 3-D, at least to a point. I won’t early adopt the 3-D television sets. I don’t think every single movie needs to try to make a cash grab by going 3-D. (I heard the sequel to The Hangover is going to be in 3-D. I don’t want to pay extra money so I can see the unwieldy moist hairs of Zack Galifianakis’s beard right up in my face.)

But when my girlfriend and I went to see Avatar in 3-D and IMAX, I felt like it was worth our $74,000. And Honey I Shrunk the Audience at Disneyland is, and I say this without sarcasm, absolutely fantastic.

These examples of 3-D… are not. Here, in no particular order, are 11 crimes against 3-D from the past 30 years. 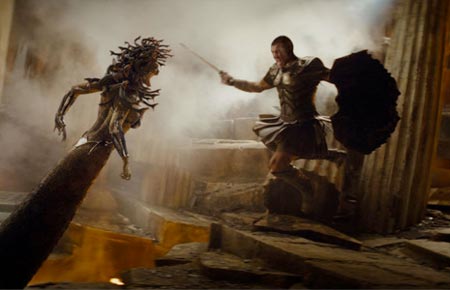 So, yeah, this kinda inspired the list. Clash Of the Titans was filmed in 2-D. Then someone realized that people were willing to pay an extra $3 if a movie was in 3-D. So they did a quickie conversion on Titans to make it 3-D. Sort of.

As I sat there watching it, seeing the “3-D” characters that looked like they were awkward cardboard cutouts from the original South Park episodes or the result of a poor overuse of the emboss filter in Photoshop 3.0 for Tandy, I quickly realized all the negative hype was right — and I should’ve used that extra $3 toward buying 12/19ths of a movie theater soda.

My hope is that Titans will be a learning experience — even though it made some money, people have almost universally raged against the 3-D. Now that everyone knows 3-D is here for real, movies can be properly shot in 3-D, not retro-fitted… and 3-D will be properly and intelligently employed in movies where it can truly enhance the experience.

Please. Because next year’s Oscar crop doesn’t need a period piece where embossed versions of Meryl Streep and Jim Broadbent wear Victorian garb and argue about forbidden love while a steamer comes RIGHT AT YOU (sort of) in 3-D.

Let’s talk, for a moment, about the bastard child that Nintendo keeps chained up in the basement, never to speak of again. For those who don’t remember (aka most people), in the mid ’90s, Nintendo released a bulky piece of bright red hardware called Virtual Boy that promised to deliver 3-D video games to you.

Well… sort of 3-D. The games were all in monochromatic red, on black, and while they did have a little bit of visual depth, it was less 3-D and more like a 2-D image in the foreground and another 2-D image in the background. I never once got lost in the experience and felt like it was me out there playing tennis against Yoshi or bowling with (shudder) Nester.

It was the biggest flop Nintendo ever produced — even worse than R.O.B. or the Super Mario Bros. Super Show — and was off the market less than 13 months after it debuted.

I have personal experience with this one as I, yes, own a Virtual Boy. I picked one up on super clearance for $25 (down from the original retail price of $180+) and even grabbed a few games at $5 each. The Wario game isn’t even that bad, although, again, it’s not really 3-D, more like “sometimes a two-dimensional Wario is close and big, sometimes he’s far and small.”

Internet phenomena have come a long way in 14 years. If the creepy, choppy dancing baby video came out today, and not in ’96, it would get passed around like crazy for a day, would get like 2,300 Diggs assuming the right user submitted it, BustedTees would try to rush a shirt to market about it and everyone would move on by the end of the week. It certainly wouldn’t get a prominent spot on the modern equivalent of Ally McBeal. (Which is… I don’t know… which Law and Order has the skinniest supermodel ADA these days?) 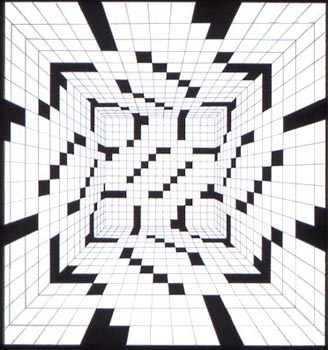 Once, an old roommate was at a bar, doing that thing people sometimes do when they need to entertain themselves (and their friends) by telling wildly ridiculous lies to every stranger they meet. As the lies escalated, he eventually was talking to a girl who asked him what he did for a living.

“I make 3-D crossword puzzles,” he said. “What are those?” she asked. Without missing a beat, he said, “They have three kinds of clues: Up and down, across… and through.”

Anyway, 3-D crossword puzzles are an attempted fad that never came close to catching on, so they’re here. 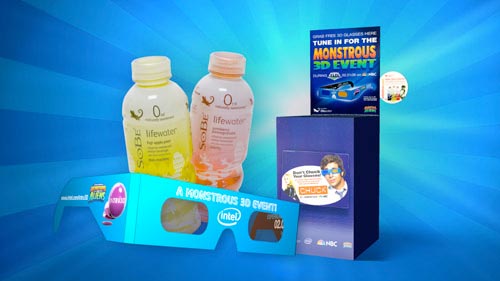 A few years ago, there was going to be a 3-D trailer for the movie Monsters Vs. Aliens shown during the Super Bowl. To see it in 3-D, you had to go get 3-D glasses at the grocery store from a Sobe or Pepsi display. They called this an “event.” I called this, “Asking the public to do way too much work to watch a commercial.”

Plus, it was for Monsters Vs. Aliens — not a movie that the entire world was clamoring for. Why is everyone always fighting versus aliens anyway. Monsters, Predator, the state of Arizona. Topical! 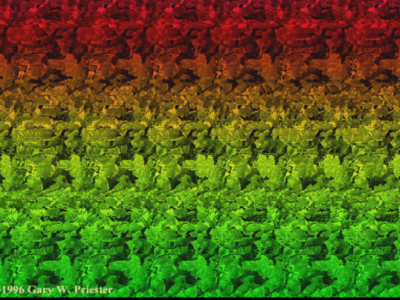 The thing about mentioning Magic Eye puzzles today is that no one gets excited. We all only have two reactions. “I could never see those things” or “I could see them but they were always such a letdown.”

So Left Eye dies and TLC’s posthumous release was by far their weakest album. It didn’t need to go down that way. Four of 2pac’s 13 posthumous albums have been as good as what he did when he was alive.

The only notable song from the album is Damaged, the final TLC song that made the Billboard chart — peaking at 53. The video (which isn’t embeddable) is totally weird too — it’s mostly T-Boz with a Tina Turner wig and Chilli fondling herself while the actress who played Rico’s wife on Six Feet Under gets abused by her husband and then gets the courage to break free. Oh, and she shatters into a puzzle or something. (?)

I don’t know how they had the restraint not to shoot that effect in 3-D. 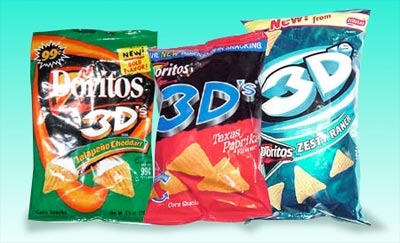 When the best thing people can say about your new product is that they’re like “a slightly more flavorful version of Bugles”, that’s not a good sign.

I have a lot of readers born after 1985, so I’d like to paint a picture of that era as someone who was just slightly old enough to remember it. In the early ’80s, when, for the first time, anyone could watch movies in their living room using a VCR, it, without hyperbole, rocked everyone’s balls off. I remember the first time we rented a movie and watched it on my cousin Marcy’s new VCR, we thought the world was going to end. Now I access a Slingplayer onto my BlackBerry and prefer to watch streaming movies on my computer so I can multitask… but back then, shiiiit.

The VHD player was supposed to be the next evolution of the VHS player. (There was no rival “Beta” player to it this time, either.) It could play special video discs and make them 3-D.

And sure, the 3-D wasn’t spectacular (from what I’ve seen online — I never saw one in its time), but it was 3-D. For the handful (really, only like six) 3-D movies that were available for it. That limited selection… plus the fact that America was just starting to widely adopt the VCR and didn’t need it being replaced already… doomed the thing within a year. 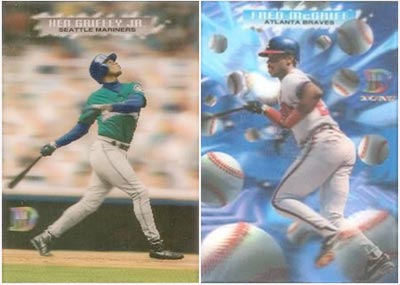 The baseball and trading card market peaked in the early ’90s. When it started collapsing, card companies threw up every gimmick they could think of to try to stay afloat. For Topps — who generally held the flag as the most gimmicky brand — that meant making a line of 3-D cards.

But, again, this is 3-D… sort of. Mostly, they’d cut out an image of a player in action, then paste him against a backdrop with perspective (either a blurry baseball field and crowd or just a random collection of stock images). Often, the backdrops were lasers and kaleidoscope colors — remember those school pictures people used to take with the LASERS shooting behind them? Kinda like that.

D3 bombed, and Topps never made a second season. As an Indians fan, the 1995 baseball season still means a lot to me… if they made a 3-D card of me from that year, it would be me watching the final game of the World Series with my heart being three dimensionally ripped out of my chest. (Against, of course, a backdrop of lasers.) 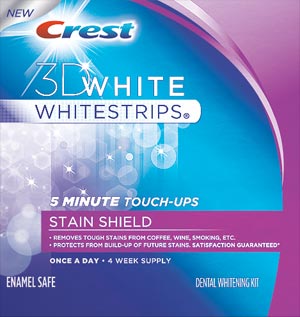 I just saw these in Target. Egregious example of hopping on the 3-D bandwagon even when it’s neither necessary nor appropriate. Teeth aren’t meant to be 3-D. You don’t want them coming at you. To me, big white teeth coming at me in 3-D means I’m encountering: (1) A snaggletooth (2) buckteeth (3) Julia Roberts in a romantic comedy like Love Is Nice. All bad things. Man I wish I had the power to summon the Cavity Creeps right about now.

11 Computer Things I Just Can’t Get Into