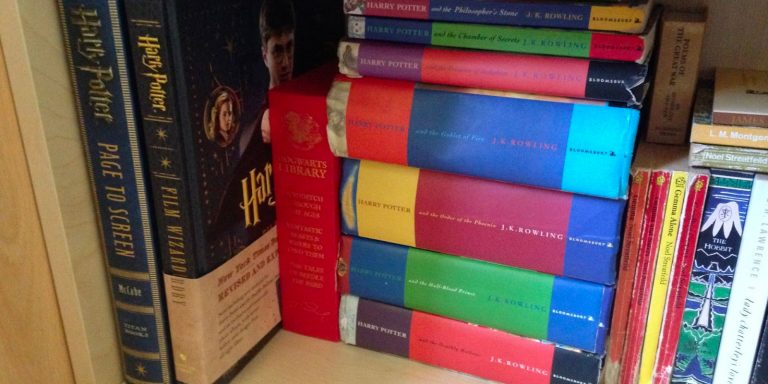 China has pumped out some absolutely hilarious bootleg books about Harry Potter. These were the best ones I found.

I’ve always found the Chinese bootleg industry — which is scarily enormous — to be fascinating. It’s clear they have an affinity for Western brands… but have such different cultural values and backgrounds that they never quite “get” the nuances, the appeal, the subtleties that define those brands. That leaves their rip-offs being, well, tragically bad.

Yesterday, I stumbled upon the Chinese Harry Potter fake book market. Here, it seems, Chinese authors have seized upon the Potter popularity and decided to run with it. It’s hard to say how many new Harry Potter books have come out of China — most of the articles I read put it around a dozen — I found almost twice that during my research and picked my 11 favorites to share here.

These are 11 amazing fake Harry Potter novels written and bootlegged in China, and a little info I found out about each of them. Although they’re truly unbelievable, each of these is very much real. 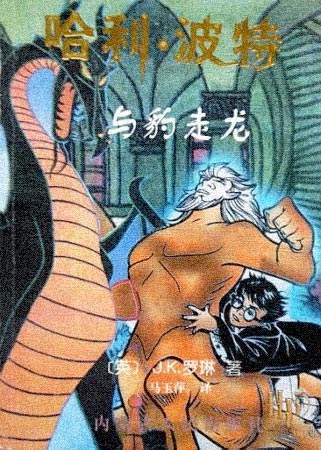 According to the translated excerpt I found, the author took the text of J.R.R. Tolkien’s The Hobbit and replaced the character names with names from the Harry Potter universe. Except for Gandalf — he remains and joins forces with the Potter crew. Here’s a passage, full on [SIC] in advance:

There was a hobbit, who didn’t even know how to return home. He lived in a hole in the ground, and didn’t know where he came from or where he was going to. He even didn’t know why he had become a hobbit. This was Hogwartz School of Witchcraft and Wizardry 5th year apprentice Harry Potter.

After Gandolf left, the five of them rode their brooms, travelling with the wind. Trees and cars along the roads below receded. Only when they encountered the occasional passenger jet, the pilot and passengers would cry out, “Hey! Flying people!”, or “Hey! Aliens!”

I wish, instead of copying The Hobbit, the author had done a crossover between Harry Potter and the Tolkien characters. It would’ve been way better than when the Flintstones met the Jetsons or when Homer made a cameo in “The Love-Matic Grandpa.”

Voldemort is getting stronger, so Dumbledore needs reinforcements. He reaches out to China’s elite Nine Mysteries school, which sends over six teenage wizards. Naturally, the six Chinese wizards are amazing and make the Hogwarts students look like garbage.

(There’s no way a book written in China is ever going to suggest another country’s school system is up to their standard. Hell, I bet the students in England never even learn about the time Mao spun the Earth backwards to defeat Hitler.)

The Chinese exchange students embiggen Harry’s confidence to fight Voldemort. And just in time — Voldemort leads a charge of Death Eaters, dementors and giants in an all-out siege of Hogwarts. Only Harry and the Chinese students can stand in his way. 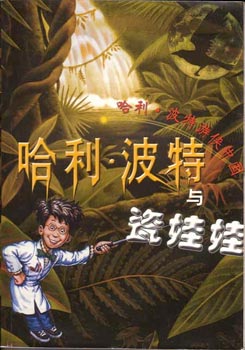 Quite a simple plot here. Voldemort reaches out to his Chinese counterpart and protege, Yandomort, for help fighting Harry. Harry needs to go to China to track down the Chinese Porcelain Doll, which could stop Yandomort. Seems like a stupid anti-evil trinket, but, then again, so was the sorcerer’s stone.

As Harry travels to China, he befriends some Chinese circus acrobats who knew Yandomort back when he was a kid — named (literally translated from Chinese) Naughty Bubble. Turns out Voldemort killed Naughty Bubble’s mom, who was named (literally translated from Chinese) Big Spinach, then took the kid under his wing and made him evil.

Can Harry and the Chinese acrobats find the doll in time to stop the ‘Morts? Will Naughty Bubble realize that Voldemort killed Big Spinach and turn on him? How great is China? These questions and more might be answered. Or you might find out the end of The Return of the King. Either way, sounds pretty solid.

I couldn’t find a translation of this book (or a picture of its cover) but the title just kills me — smashing together two completely unrelated, but popular, Western book series to produce (I’m guessing) a non-sequitur mess. It would be like the bootleggers making a movie called Avatar: The Hangover or a TV show called Laverne and Shirley and Jon and Kate.

5 | Harry Potter and the Waterproof Pearl 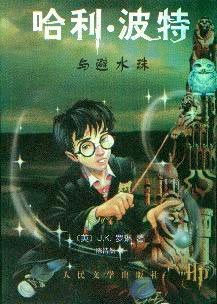 Gandalf is back for more adventures! (I’m not positive if this one was a direct rip of a Tolkien book, though… the plot feels more like The Little Mermaid meets Super Mario Bros.)

Galdalf, Harry and some random character named Peter go on an adventure to find the Little Warriors who live in a desert city in the sea. But while they’re gone, Hermione gets kidnapped by the Dragon King. Harry, Gandalf and Peter must converge to go rescue her by invading the Dragon Palace using the power of the mystical waterproof pearl. Which I think is also the name of a sex toy.

Sounds like the book we all got to read over here in the U.S., Harry Potter and the Half-Blood Prince, right? You’d be sorely mistaken.

Harry Potter and the Half-Blooded Relative Prince takes a twist even J.K. Rowling never had the lady-balls to pull off — it makes Harry evil. In this novel, Harry’s not content at Hogwarts, so he transfers to Asia’s top wizardry school, Qroutes School of Witchcraft and Wizardry. Unfortunately, while he’s there, he becomes blood-thirsty and villainous… and can only be defeated when all the righteous Asian students team up to beat him down.

7 | Harry Potter and the Filler of Big 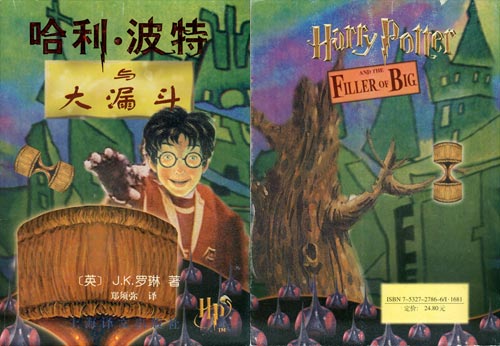 Harry leaves the Dursleys after a rough summer where Dudley was shacking up with a belly dancer. (I think perhaps the author here misinterpreted all of Rowling’s comments about Dudley’s rotund belly and came to believe that he was in love with a stripper.)

Before he goes, Bat Bug (I’m assuming that’s China’s interpretation of Dobby) tells him there’s trouble waiting at Hogwarts. And there is: All of the students keep transforming into wooden stools. Offffff course they do.

It’s up to Harry to solve the mystery and he has but four suspects: An evil student… Hagrid’s gone rogue… Voldemort’s shadow has returned… or, worst of all, it has something to do with the Filler of Big (aka the Big Funnel).

I’m guessing, based on the title of the book, the Big Funnel has to be the prime suspect.

8 | Harry Potter and the Golden Armor 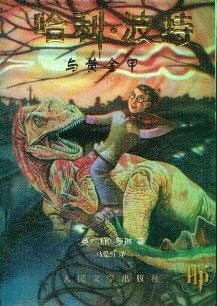 I couldn’t find a translated plot of this one, so I’ve got to judge a book by its cover. And, it appears, this book involves Harry riding a Tyrannosaurus rex. Man I hope they just lifted the plot of Jurassic Park and changed the names. Harry can be Sam Neill, Hermione can be Laura Dern, Gandalf can be Jeff Goldblum, and either Crabbe or Goyle can be Newman.

9 | Harry Potter and the Showdown

The title isn’t flashy but the back story is great. Li Jingsheng was a manager at a textile factory in Shanghai who read (legit) copies of the first six Harry Potter books to his son. The son demanded to know what would happen in the seventh, so Li started making up his own story. As he would tell it to his son every night, he thought, “Hey, this story is kinda good”… so he started staying up late, typing it up.

The end result was a 250,000-word novel… right on point with Rowling’s length after she got too powerful and stopped having to pass her books through an editor. He put the book online, people loved it, so it was printed up and put on the market.

The plot is crazy in this one. It takes place after the events of the real first six Potters, so Dumbledore’s gone and Professors McGonagall and Slughorn have to reopen Hogwarts.

Cho Chang, the Asian character from the real Potter series, introduces everyone to a genius Eastern wizardry book called 36 Strategies… which gives them a plan to get at Professor Snape. (Remember, this guy wrote it before Snape’s name got cleared by Rowling.)

The plan looks good until Gryffindor’s sword makes a heel turn and kills McGonagall. (In the author’s defense, that’s a totally viable Rowling plot twist. She never had any problem killing anybody.) Harry and his friends do manage to press on, though, and defeat Voldemort.

It’s not quite a happy ending, though, as Harry’s caught in a love triangle with two girls! (I’m guessing it’s Ginny and Cho, although who knows what this guy was thinking, it very well could be two Chinese exchange student supermodel gymnast rocket scientists who have the magic power to only give birth to boys.)

10 | Harry Potter and Beaker and Burn 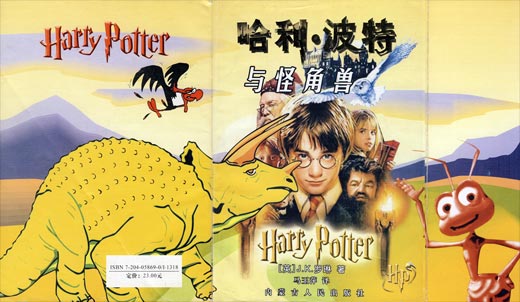 Check out this back cover, front cover and inside flap. Don’t know the plot here, just know that they took some artwork from a Harry Potter movie, put it on a book cover, then added a clip art triceratops, an angry buzzard and, most inexplicably, Flick, the star of Disney/Pixar’s A Bug’s Life.

Not gonna lie — I would buy a book with that cover.

This is an interesting literary move — they just carbon copied the plot of the first real Harry Potter book… but moved the voice to Harry’s first-person perspective. That’s some deep Rosencrantz and Guildenstern stuff right there.

This was a secret I had cherished in my heart for seven days. It scratched my heart and made it itch, and I decided not to tell anyone of it. But when I saw Hedwig, my owl, jumping outside my window, I knew it was the call from Hogwarts for me.

I would ride on my favorite flying broom, together with Hedwig and my magic wand, go-go-go, night clouds in the urban sky would cover my trails, and the meteor you saw in the sky was my traipsing manteau.

A “manteau” is defined as a “loose cloak.” I just learned an English vocabulary word from a Chinese Harry Potter bootleg. I just failed one of the O.W.L.s of life.

[Huge credit goes out to the New York Times, Mutantfrog.com and Young-0, without whom I could NEVER have done this list.]