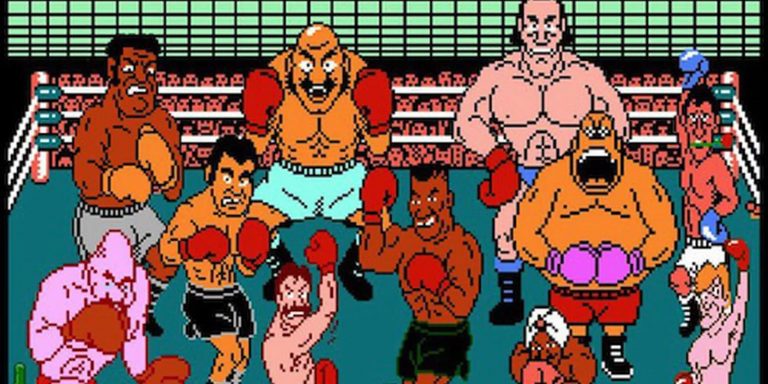 The boxers in Mike Tyson’s Punch-Out all were universally designed to torment you (except maybe Glass Joe). But who were the worst?

While I was in Cleveland this weekend, I found myself playing the NES game Mike Tyson’s Punch-Out. It’s one of the reasons I’m glad I kept my Nintendo in great shape back in the day… now, 20 years later, it still works, and still plays the games I love. If there’s one thing Punch-Out accurately captured about boxing, it’s that you legitimately hate the guy you’re fighting. >(2018 Sam says: If there’s a second thing Punch-Out accurately captured about boxing, it’s… um… )

In all my talks with real boxers (which, admittedly, is two talks), they say you have to hate your opponent going into a fight. Otherwise, you won’t be aggressive, intense, motivated, whatever. And I HATE the guys in Punch-Out. I don’t hate all of them equally, but I hate them. (2018 Sam says: I must’ve been in a very good mood when I wrote this. Just putting out a great energy into the world.)

He’s not just the biggest asshole in Punch-Out, he’s one of the most assholish video game villains ever… and possibly one of the biggest assholes in the world. Between his perpetual look of condescending disdain… the fact that he’s approximately four times bigger than Little Mac… and the way he busts out his bull charge knockout move just enough times that he’s definitely going to knock you down at least once… he’s evil.

And that’s not even the worst part. No. The worst part is that he was programmed to be an asshole. The second time you face him, you can only knock him down either with a star punch or with a perfectly-timed punch to the gut during the bull charge. And then, when you do knock him down, he ALWAYS stays down until 9, then gets up. Just to give you false hope. Just to toy with you. Man I hate this guy.

He fights you drunk and openly laughs at you before you start boxing and when he knocks you out. He also dodges most star punches, has this one jab that’s always infuriating… and, for some reason, he’s purple. Honest to God, purple. (2018 Sam says: About a year after writing this post, I got to make a Punch-Out parody music video at work. And painting my Soda Popinski actor purple was NOT as easy as I was expecting.)

How many kids of my generation grew up thinking that alcohol would turn you purple? And how many kids did that drive to drink because, honestly, it would be kind of awesome to turn purple?

He’s not that hard to beat, but he’s so smug and creepy. He’s too realistic. He’s the foreign guy out at the club who thinks he’s the greatest thing in the world but really just makes you feel ill when he bumps his way past you and transfers his sweat and 0.005% of the cologne he’s wearing on to you. I didn’t know about guys like that as a kid, but I could already tell I really, really, really didn’t like them. (2018 Sam says: In 2008, I would sometimes to out to clubs. The 2018 version of me would almost certainly not gravitate toward a clubbing reference.)

Just because he’s really easy to beat doesn’t make him less of an asshole. Maybe it’s my built-in prejudice against Germans. I don’t know. (2018 Sam says: Who knew 10 years later the Germans would amongst the world’s sanest people?)

But something about the way he shakes his head around and (if he lasts more than a round with you) he says, “Surrender or I will conquer you!” really just makes me angry. There’s a lot of satisfaction when he hits the mat.

Same deal. They put a Southern California meathead in the game. He’d be higher on the list, except he’s a little vulnerable thanks to the fact that he’s got a receding hairline and he’s clearly just a sad middle-aged man clinging to his “glory” years. (Which, by the way, is a lot of nuance for an 8-bit video game character. Well done, Nintendo.) His spin punch feels assholish, but not terribly. And his taunts, like “I work on my tan harder than I’ll have to work on you,” just feel like he’s mailing them in a little. (2018 Sam says: I’d comment, but by annotating old posts from when my website was taking off, it kind of feels like *I’m* the sad middle-aged man from Southern California clinging to his “glory” years.)

He’s a taunter. He steps away, where he’s out of reach, then taunts you. And you know he knows Little Mac can’t move that way. So obnoxious. Also, the fact that he can vanish and reappear seems to be an unfair advantage in boxing. It’s kind of shocking how easy he is to beat, all things considered.

Side note: Is the tiger he brings to the ring and then hangs on the ring post dead or alive? And, either way, doesn’t that make him more of an asshole — because he’s either putting the entire crowd at mauling risk… or he kills tigers. (2018 Sam says: Great Tiger borderline could’ve been featured in that recent documentary about the problem with Apu.)

Possibly the worst boxing trainer of all time. He rides a bike while you run… he only rubs your shoulders hard once a match, and you have to hold Select to make him do it… and he literally offers the worst and most generic advice in boxing history. Don’t tell me to join the Nintendo Fun Club to beat these guys! It’s 2008! The Nintendo Fun Club went belly-up two decades ago. Useless.

He’s like an aspiring asshole, but he doesn’t quite get there. He mostly seems obsessed with giving shout-outs back to Japan. (By the way, how self-loathing are the Japanese programmers at Nintendo who created this guy? One of his taunts is “Sushi, Kamikaze, Fujiyama, Nipponichi.” Were they trying to play to Americans, saying, “Yep, our language sounds funny and even our national heroes just spit out nonsense words”?) Piston Honda fights fair; he’s not a complete pushover but both times you face him he’s very beatable. He’s got a little asshole in him, but not a lot. Maybe 15 percent. (2018 Sam says: Did it not occur to 2008 me that beyond his stereotypical taunts, he was also named after Honda?)

He’s here because he’s good, and he can be frustrating. But it’s hard to have any animosity toward him. He fights straight-up… his rapid uppercut move is powerful but reasonably defendable… and his taunts are basically just generic (“I think you’re gonna have a nightmare tonight.”) To me, he’s just a good boxer from Philly who works hard, stays near the top of the card and deserves his successes. I don’t hate him. (2018 Sam says: Mr. Sandman is really tough. I should’ve ranked him much higher.)

In real life, maybe. (2018 Sam says: Um, definitely.) In the game, not at all. He’s just really, really good. The satisfaction you get when you finally practice enough to beat him comes entirely from the challenge. (Unlike, say, beating second Bald Bull, when you invariably stick two middle fingers up at the screen and laugh at his TKOed corpse.) His taunts are for real (“Hey, is this kid a joke, where’s the real challenger?”)… but are justified. He’s really good.

Out of respect to the original game, this post will not delve into the regrettable Mr. Dream era of NES Punch-Out.

I couldn’t put Glass Joe here, he’s like a guy who’s been forced to box because he somehow got under the mob’s thumb and still needs to pay them off to save his family. And I couldn’t put King Hippo here, because he’s really cuddly and sweet and, if he ever lasts to round two, he invites you to go to lunch after the fight. (Even though listing his weight as “???” is borderline asshole behavior.)

So I’m going with Mario, who refs the matches… and sometimes arbitrarily slows down or speeds up his ten count. Now, you can sit there and tell me it’s the Nintendo’s processor speed that determines that… or that the game has pre-decided whether your opponent or you is going to be able to get up before the 10 count, regardless of Mario’s count speed… but I say, keep it straight. Don’t get all fast count on me like Nick Patrick or the evil Earl Hebner. It just makes me think the fix is in.