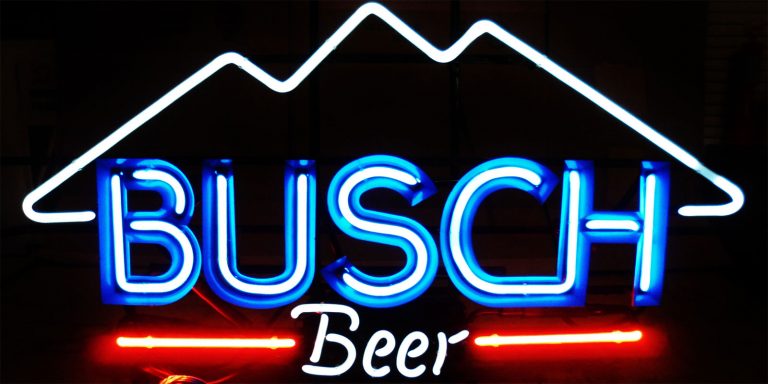 Craft beer is an art. Crappy beer is also art, albeit a different type of art. Finger painting-esque.

Over the course of my life, I’ve, for better or worse, consumed a lot of crappy domestic beer. I say “for better” because I could’ve been out there doing crappy domestic drugs like meth or huffing crappy hardware store products like paint. So, given the alternatives, beer is clearly the winner. I say “for worse” because binge drinking is supposed to be for high school kids… and binge drinking low-class beer is supposed to be for middle school kids.

But, anyway, here we are. It’s time to look at the beers that have found their way into my life so, so often… and rank them based on any number of arbitrary criteria that I haven’t even really thought of yet.

Maybe it’s the nostalgia speaking, because this is the beer of the Midwest. They don’t sell it out here in California. (2018 Sam says: Shortly after this post in 2008, I spotted Busch Light tall boys at a random convenience store in L.A. And a few years later, the 30-packs would finally hit stores.) But back in the day, I daresay I remember not just tolerating it… but growing to love it.

Also, in 1997, a liquor store in Evanston, Ill., (2018 Sam says: I probably should’ve mentioned that’s where I went to college) sold 30 packs of Busch Light for $10. Of course, I was 18 at the time, so the official stance of this website is that I only know the price because older people told me so.

I’m not sure how Bud Light became the king of the crappy domestic beers, but it sure did. (2018 Sam says: Um… Anheuser-Busch’s insane marketing spend and distribution network? How was that a mystery to me?) Once most people get to the point where they can tell Bud Light, Miller Lite and Coors Light apart on taste… they default to the Bud Light. And I’m one of them. Or maybe I’ve been brainwashed by their incredible ratio of one funny commercial per 30 attempts. (2018 Sam says: Wazzzup had its moments.)

This is an interesting one, because, back in the day, I would’ve picked Miller Lite. But, as I’ve gotten older and therefore, by default, more discerning, Coors Light has stepped up. I think it may be what happens to the beers after a week in the refrigerator: Coors Light’s taste stays about the same, Miller Lite tastes RIPE.

But I’m not going to get rid of it completely. Of the top four on this list, I think it tastes the best out of a bottle. And I’m fairly sure it’s the lowest carb of the four, which is important to those of us who try (though often fail) to pay attention to stuff like that. (2018 Sam says: Miller Lite would wind up factoring in heavily to the next few years, as one of my best friends got bit by the ol’ diabetes bug and started pushing Miller Lite for our drinkin’ time due to its carb content.)

When you’re thinking to yourself: I’m not sure if I want to order a beer or just drink some water… you can reach for the Michelob Ultra, and have both!

You can tell it’s made with cheaper ingredients than any of these other beers… and that’s saying something. The good news: Once you’re several beers deep, you can’t tell the difference. (2018 Sam says: Older Sam disagrees. I can absolutely tell the difference now.) And the stores practically give this stuff away.

At some point, this became a hipster beer. (2018 Sam says: Somehow it still kinda is. Shouldn’t the hipsters have moved on?) So it’s only good if you drink it because you like its blue-collar, heavy taste… not because a 114-pound guy wearing impossibly skinny jeans and a 20-year-old tattered Steely Dan shirt just ordered one too.

Icehouse is more alcoholic, so it’s always good to drink in a hurry. After typing that sentence, I realized it might mean that I’d have to go into detail about when you’d be drinking in a hurry. And I don’t want to get into it. Just have some Icehouse ready if we all decide to flee from Pharaoh. (2018 Sam says: I’m not sure if Icehouse is still on the market.)

I went to college in the Chicago area, where you get introduced to Old Style quickly. And whether you think it’s good or not, if you’re going to drink during Cubs games, you have to get down with Old Style. (And you ARE going to drink during Cubs games. That’s not a “the Cubs are bad” comment, that’s a “Wrigley Field is the world’s biggest bar” comment.) (2018 Sam says: Cubs games have gotten so much bougier over the past decade that now I’m assuming the fans only drink fine wines.)

No one would’ve ever had this beer if it wasn’t always the “cheap keg” option at keg stores. Actually kind of a brilliant marketing strategy. But when you’re standing there, next to the red tub of ice, holding the tap, asking some random stranger to give the keg a few pumps… it’s kind of comforting to see Killians Red. I just got a vision of a very, very unusual Norman Rockwell painting. (2018 Sam says: I’m pretty happy to say I haven’t bought a keg in damn near the decade since this was written.)

Always seems to be the last beer to go, so it’s fitting as the last beer on this list. I don’t even remember if I’ve ever had one. But nothing from the Old Milwaukee, Beast or High Life family was going to make this list. So I’ll give it the benefit of the doubt.