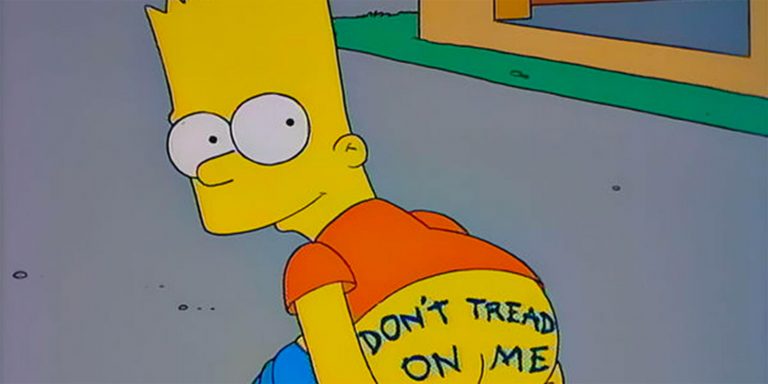 On July 4th, let’s look at the best things The Simpsons have said about the country they call home.

My roommate Gabe was in Europe last year and ended up in a conversation about The Simpsons with some German people. He found that they love the show — but love it differently than we do. While we appreciate Homer for being the hyperbolic-ly satirical embodiment of every American stereotype… they just like that he’s a dumb American doing dumb American things like all dumb Americans do. To them, the show isn’t satire, it’s an animated documentary.

So, on this July 4th, in the spirit of the international camaraderie, appreciate these Simpsons quotes about America however you see fit. Even if you live in Brazil.

Adil the exchange student: How can you defend a country where 5 percent of the people control 95 percent of the wealth?
Lisa: I’m defending a country where people can think, and act, and worship any way they want!
Adil: Can not.
Lisa: Can too.
Adil: Can not!
Lisa: Can too!
Homer: Please, kids, stop fighting. Maybe Lisa’s right about America being the land of opportunity, and maybe Adil’s got a point about the machinery of capitalism being oiled with the blood of the workers.

Of course, this quote wouldn’t be relevant today, since I don’t know if you’ve heard but America’s now a communist/socialist dictatorship where the President is achieving his dream of sitting back, running all the businesses, and deciding whether or not you’re going to get that ankle surgery you’re hankerin’ for. But like 20 years ago when The Simpsons busted out this quote it was incredibly ahead of its time.

Lisa: Ralph is only eight years old! It says in the Constitution, you have to be 35 [to be President]!
Bart: The Constitution? I’m pretty sure the Patriot Act killed it to ensure our freedoms.
Homer: [mockingly] Ooh, the Patriot Act is so terrible! The government might find out what library books I take out! What’s next, finding out what operas I go to?
[Homer and Bart high-five]

Oh my God! Someone on the Internet just quoted a Simpsons episode made in the last eight years! Quick, hit the Independent Thought Alert button. (And by the way, even if The Simpsons is more past its prime than Jamie Moyer, that quote is amazing.)

3 | On the legislative system

Kent Brockman: With our utter annihilation imminent, our federal government has snapped into action. We go live now via satellite to the floor of the United States Congress.
Speaker: Then it is unanimous, we are going to approve the bill to evacuate the town of Springfield in the great state of —
Congressman: Wait a minute, I want to tack on a rider to that bill: $30 million of taxpayer money to support the perverted arts.
Speaker: All in favor of the amended Springfield-slash-pervert bill?
Everyone: BOOOO!
Speaker: Bill defeated.
Kent: I’ve said it before and I’ll say it again: Democracy simply doesn’t work.

I don’t know. I kinda wish some of my tax dollars were going to support the perverted arts. Might as well teach the kids something that can help them compete with the Japanese.

4 | On the American attention span

Homer: Do you want the job done right or do you want it done fast?
Marge: Well, like all Americans… fast!

It’s the exact reason the public appreciates — nay, demands — that Kevin Costner step in with his quick solution to this oil spill.

Quite possibly the most succinct summary of America’s two political parties ever.

Colby: Okay Homer, I don’t know anything about planes, but I know about you. You have what made America great: no understanding of the limits of your power and a complete lack of concern for what anyone thinks of you. So you’ll land that plane. And do you know why? Because I heard some guy say you couldn’t.
Homer: What! I’ll show him. I’ll show that guy!

You’ve probably never seen the episode containing this quote (it’s another one from the past few years) — but it’s a quality quote. (Much like Mayor Quimby believes “au gratin potatoes” are a quality side.)

I like the American part of it, but I think I’m even more into the part about doing something because “some guy [said] you couldn’t.” That’s just about the best motivational tactic there is.

Sideshow Bob: Your guilty conscience may move you to vote Democratic, but deep down you long for a cold-hearted Republican to lower taxes, brutalize criminals, and rule you like a king. That’s why I did this, to save you from yourselves.

With the way the parties keep trading off presidents, this means we should be in line for a king in two or six years. Rather than fight it, just spend the next few years trying to make sure you’re not so poor by the time he takes the throne. (That’s my plan. So far it’s… not going so well.)

Brazilian lifeguard: Excuse me, Americans!
Homer: Ah! How did you know?
[he turns to reveal a t-shirt that shows Uncle Sam biting the globe with the phrase “TRY AND STOP US”]

Grammatical issue aside, I’m pretty sure that’s the best t-shirt anyone’s ever worn on The Simpsons. The episode where Bart produced t-shirts wasn’t that great. I liked the Pin Pals shirts and I’d wear one, but they’re not this good. Rod or Todd Flanders misinterpreting a Butthole Surfers band shirt isn’t bad. I have to be missing some amazing ones, right?

Homer: (before his triple bypass): America’s health care system is second only to Japan, Canada, Sweden, Great Britain, well… all of Europe. But you can thank your lucky stars we don’t live in Paraguay!

This is going to sound boorishly American — but other than this quote and the World Cup game I watched this morning, I’m pretty sure I don’t know anything else about Paraguay. Is it like Uruguay with no arms or legs?

10 | On the American work ethic

Homer: If you don’t like your job, you don’t go on strike. You just go in every day and do it really half-assed – that’s the American way.

Now, yes, I used this quote on a previous list. But it’s so perfect I couldn’t exclude it. Plus I didn’t include the “that’s the American way” part last time I used it. So I’m just re-appropriating it here. Is that half-assed of me? Sure. Irony rules!

Convenience store clerk: Celebrate the independence of your nation by blowing up a small part of it.

Have a great July 4th! Salute those lucky 13 stripes and 47 stars. And be careful — remember, this is the second-most dangerous holiday for driving.

The Simpsons Was Wrong: Humans Are Kinda Low in the Food Chain