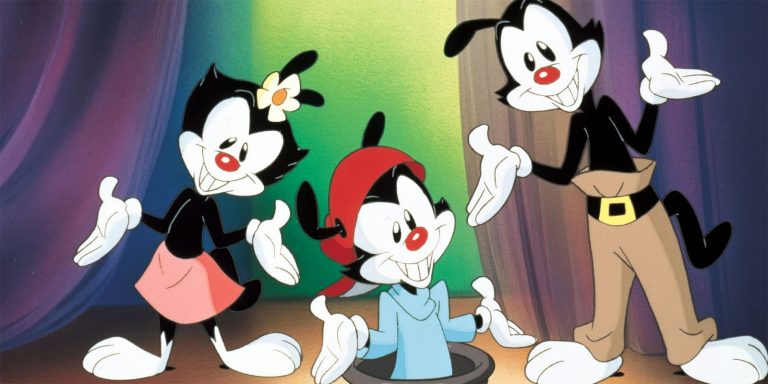 Kids cartoons, adult cartoons and even primetime network shows have slipped in some secretly filthy stuff.

As long as there have been censors, writers have reveled in circumventing them.

Or, as GOB would say on Arrested Development (which has an entry on this list, naturally) — the writers revel in cirsumventing them.

Here are 11 amazingly dirty moments that TV shows were able to slip past the censors. Some are subtle, some are blatant, some are so obscure that only Internet perverts can truly appreciate them. But in all cases, these TV moments are pure gold. The kind of gold that Kent Brockman wants you to shower in. (Yeah, The Simpsons made the list too.)

Animaniacs was, by all rights, a show for kids. But the people behind the show never let that stop them from putting in references, allusions and parodies that were clearly geared toward adults. And they were doing it long before the Shreks of the world started pulling that stunt (under the new animated film axiom of “entertain the parents with allusions, entertain their stupid kids with bright colors and shiny things”).

But this is the only time that Animaniacs REALLY went for it. And by “it” I mean “making a joke that’s unbelievably raunchy and completely inappropriate for kids.”

I mean… Barney HAS to be talking about his penis here, right?

This is an obscure one that’s just perfect for the post-Urban Dictionary world.

This is one of two times on 30 Rock where they use the term “lemon party.” In both cases, it’s ostensibly a reference to the main character, Liz Lemon’s, family.

I picked this 30 Rock shout-out to lemon parties over the other one because, in this case, Liz’s father, Richard Lemon, says, “You can’t have a lemon party without old Dick!” And that, my friends, is NO coincidence.

The Simpsons have had some great, great dirty moments (including the brilliant “Sneed’s Feed and Seed, formerly Chuck’s” sign I put on my list of the 11 Ingenious Signs On the Simpsons).

I particularly like this clip, though, from the season 12 episode where Springfield divides in two, because of how it’s presented. Kent Brockman uses a dirty term (in this case, golden shower) — he doesn’t know what it means, his crew snickers, and we move on. And the higher-ups at FOX either chose to ignore it… or totally missed it.

The people behind Veronica Mars weren’t shy about going for the quick sexual pun — I mean, they named two main characters “Dick” and “Beaver” — so it was only fitting that they’d be the first people to squeeze the term “Dirty Sanchez” onto network television.

Frankly, I’m impressed that they make it come up fairly organically.

I’ve never watched Rocko’s Modern Life but, in researching this list, I learned that it absolutely LIVED for pushing the line of appropriateness for a kids’ show.

I pulled two clips here: One that clearly takes place in a pay-by-the-hour motel (and even makes a premature ejaculation joke)… and one where a dog gets sexually excited and turns (not metaphorically) into a red rocket.

Apparently, the motel clip was so controversial that it only aired once and was pulled from the episode in future airings. The red rocket, which is more subtle, lives on.

On The Smoking Gun, they have a transcript from the Howard Stern show, where Howard and Artie Lange discuss the term “blumpkin.” (You can find the definition here.)

Artie mentions that he yelled out the word when he was a cast member on ABC’s The Norm Show… the censors asked Artie and Norm what that word meant… they swore it was just a made-up nonsense word… so it aired.

Unfortunately, while that transcript is readily available, this clip was extraordinarily difficult to find. Let’s just say, because of my ridiculous determination to track down that moment, I am now far, far, far too versed in the second season of The Norm Show. And wow, did it under-use Norm MacDonald’s talents.

According to an interview with Chuck Barris, he brought these Popsicle-sucking twins to the show just to try to distract the censors so other edgy acts could slip past and get air time. For some reason they didn’t see anything wrong with the Popsicle girls, though, so they made it on TV.

This one could be totally unintentional — definitely more so than any of the other entries on this list. On the other hand, someone along the process had to say, “That’s really dirty.” Whether it was a writer, producer, the voice actress, whomever — someone had to know that the concept of getting goop in the hair isn’t completely innocuous. Right?

I had so many choices from Arrested Development — GOB naming his boat The Seaward… Kitty having a cocktail in her mouth… anything Tobias says, specifically when he’s Mrs. Featherbottom, Nellie blowing them all… away — but, in the end, I went with this clip.

This isn’t just slipping one past the censors — this is the most brilliant show ever managing to befuddle the censors to the point where they’re throwing “pussy” around at 8:30 pm on FOX and no one knows if it’s crude or not.