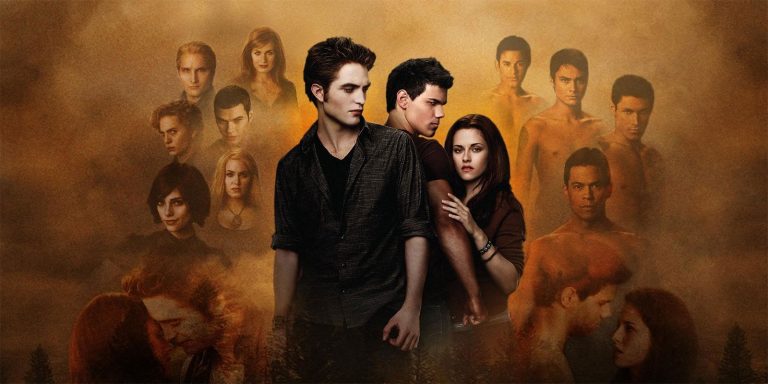 I ventured to the scene of the Twilight New Moon premiere to take an anthropological look at the mass of humanity.

Yesterday afternoon, I headed over to Westwood, California, to check out the scene that was building outside for the New Moon premiere later that evening. Word was that people had been lining up since last week — and I wanted to see the chaos for myself.

I’m no Twilight fan — I don’t have any beef with it (though I do love adding fuel to the rumor that it’s secretly Mormon propaganda), I’ve just never read any of the books. I’ve decided to skip this whole modern vampire fad altogether. No Twilight, no True Blood — I’m just gonna sit this one out.

But I love the crazy crowd scenes like this, so I grabbed my camera and my notebook and went to see what I could find. 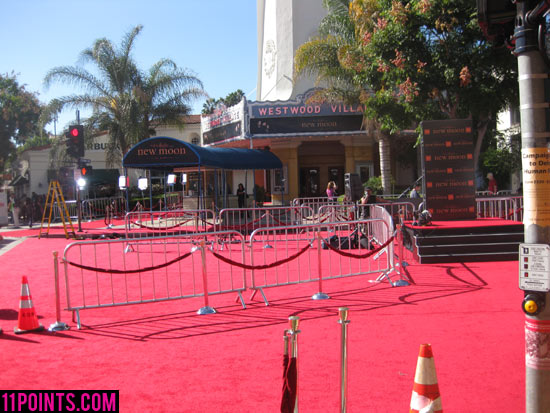 I don’t go to Westwood that often because of the prohibitive parking situation (more on that coming), but I have bumped into a few premieres there. In my first week in L.A. many, many years ago I was in Westwood and bumped into the Legally Blonde premiere.

This was, by far, the biggest one I’ve seen. Quantity of fans aside, this shut down two theaters, two streets and had a massive, awards show-style red carpet.

However… for whatever reason, they really didn’t have any security on the carpet. I was walking up and down it and no one even glanced at me. I guess they weren’t worried about fans storming the red carpet — these people were all so obsessively protective of the spots they’d staked out that they weren’t going to bother.

2 | There was an absolutely ridiculous line 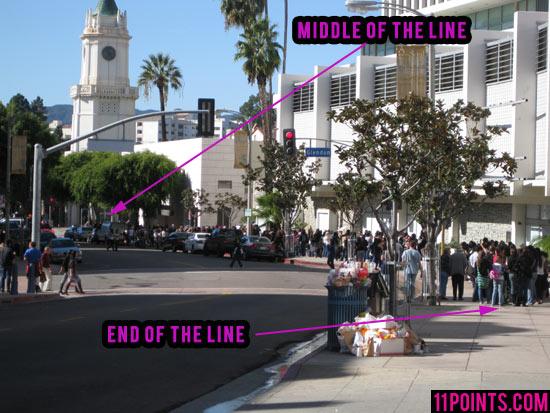 Since these people weren’t lining up to actually see the movie, I asked them what they were lining up for. Turns out it was a line to try to get into the railed-off pens that surrounded the red carpet.

It took me 10 minutes to walk from the front of the line to the end of the line. I took this photo which couldn’t even get the entire thing… just the middle of the line and the end. There were thousands of people waiting. Not even to see the movie.

Another theater down the street had New Moon posters up — meaning they’ll clearly be showing it when it opens to the public in a few days — and zero line outside of it. I just can’t get over that: These people weren’t lined up outside a theater to watch a movie, they were lined up to watch people go into that theater to watch the movie.

Then again, I’m in no position to judge: I went 20 minutes from my house and spent an hour wandering around taking photos of people who were lined up to watch other people go watch a movie.

3 | With a little moxie, you could easily beat the system 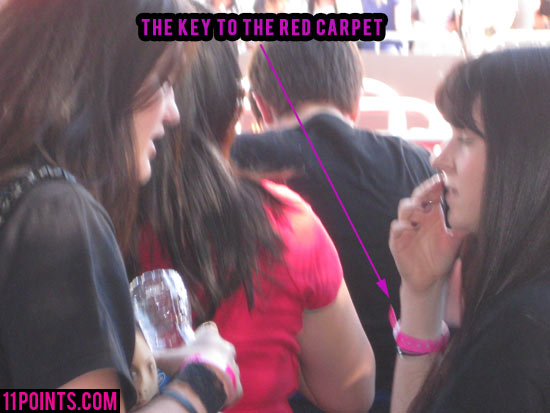 I walked down to the fan pens and asked the girls in there how they’d already received access. Most had been lined up for a few days and received the magic pass which turned out to be… a completely generic pink bracelet.

Ones that are for sale — albeit for a mind-boggingly inflated price — at Party City.

There’s a Party City about three miles from Westwood. If I’d just been a little more enterprising I would’ve gone there, bought the bracelets and sold them to the people in line for $25 a piece. Would’ve been like printing money.

4 | The fans in the line were ridiculously high energy 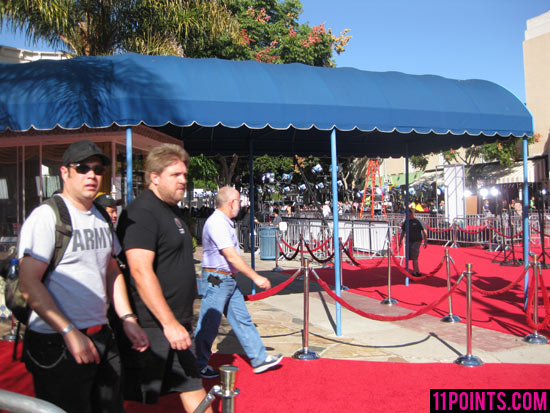 At least two-thirds had signs, half had t-shirts, and all of them were pretty excited. Even when these technician-type dudes walked out of the theater and down the carpet people in line cheered.

Although the guy in the black t-shirt does have some mythical beast-like qualities.

5 | So who camps out for the New Moon premiere? 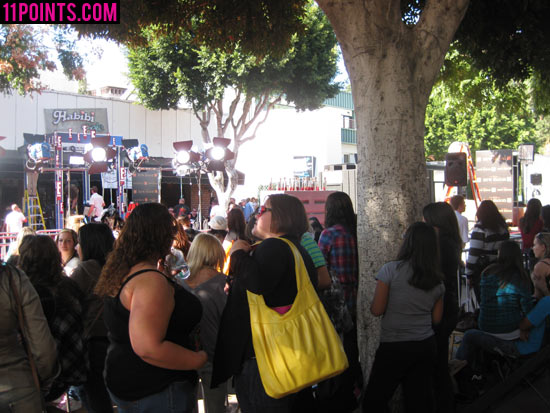 From my absolutely unscientific survey, the crowd broke down approximately like this:

Of the people I talked to, three said they’d taken the day off to be there, four were skipping school, two were unemployed and one told me he was actually a vampire so he can do whatever he wants. When I pointed out he was out in the light, he told me he’s the kind of vampire that can be out in the light. He looked Mexican to me, and From Dusk Till Dawn taught me that Mexican vampires explode when exposed to light, but I wasn’t about to start arguing with him right then and there. 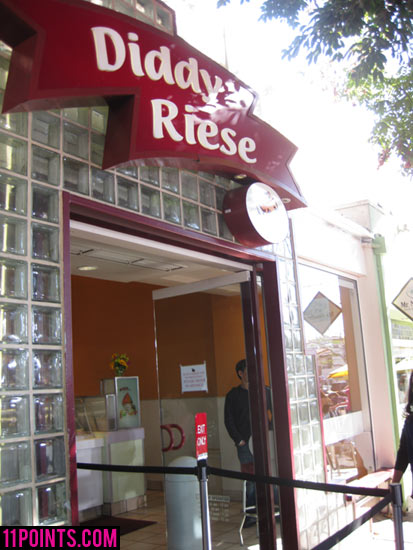 So the crowd of people extended in front of a Westwood institution — a cookie shop known as Diddy Riese. It’s famous for its insanely low prices — for $1.50 you get to pick two freshly baked cookies and a flavor of ice cream and they put them together for you in a custom-built ice cream sandwich. On the average day there’s a 20-person line outside Diddy Riese at all times; on the average night that jumps into the 50-person range.

Which led me to my most shocking discovery of the day. There was zero line at Diddy Riese. Zero. Somehow, this entire group of people was so focused on the task at hand that not a single one wanted to take the time to eat cookies. And, because of the volume of fans, they were making it prohibitively difficult for the normals to go to Diddy Riese as well.

And it wasn’t just Diddy Riese. Based on the size of the crowd, I was surprised at how little business any of the local restaurants seemed to be doing. Taco Bell was basically empty. The Chipotle down the street was even slower. Even Westwood’s In-N-Out Burger seemed to have only its typical level of customers. The only place that seemed to be getting any traction was Burger King — apparently they did a tie-in with New Moon and these fans were fiercely loyal enough that they all decided to grab Burger King.

Tons of the women there — TONS — were wearing the special Burger King crowns featuring the Twilight characters. Personally, I think that looks kinda generic, but what do I know. Maybe the Twilight vampires are the kind who appreciate a Whopper Jr. and chicken fries. 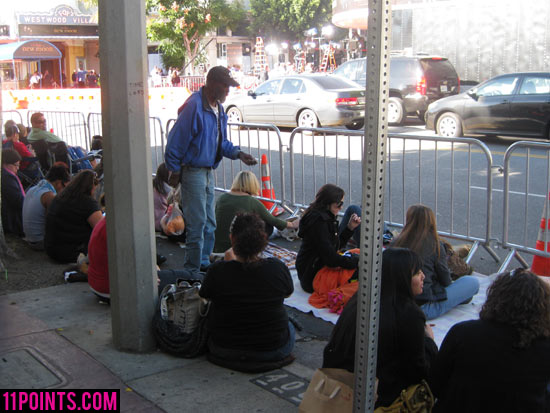 Westwood has no shortage of hobos — but this was the only one I saw who looked at the influx of fans as a potential financial windfall. I didn’t see him get any money, but I did hear him getting a lesson about Joseph Smith reading off the golden plates. (See, I just have to keep pushing that.)

8 | The only good lot in Westwood — filled 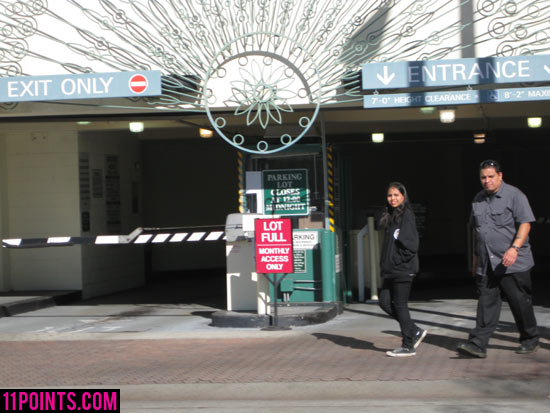 This entire list almost didn’t happen. Westwood has some of the worst parking in L.A., but there’s one good lot that gives you two hours free and always seems to have available spaces. But not today.

My special Westwood garage was completely filled up by the fans (I refuse to use a cringe-worthy word like Twi-hards to describe them. I’d rather call them vampiromaniacs or New Moonies or Twilight-in-the-loafers or once bitten, TWIce shy.)

Luckily, I found street parking. Twilight fans don’t do parking meters. (My conclusion based on this finding coupled with the point above with them all stonewalling the hobo: None of them brought any change.) 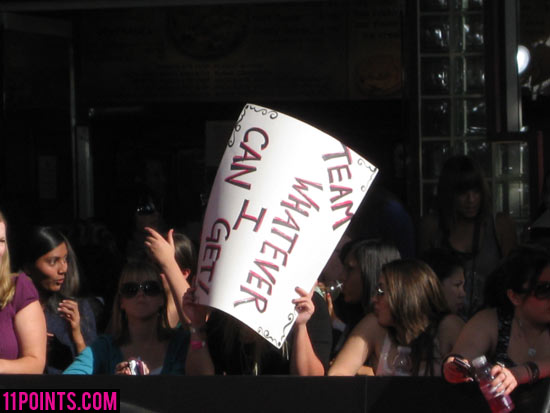 Anyway, tons of fans held up signs saying “I’m Team Edward” or “I’m Team Jacob.” Only this girl held up a sign that so brilliantly summed up the truth about every person there. 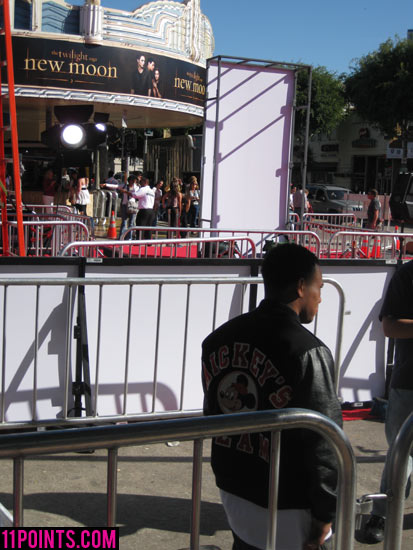 Some girls were Team Edward, some were Team Jacob. This young African-American crew member apparently decided he was gonna rock Team Mickey.

I understand many things, but I will never understand what makes a brotha buy a Disney jacket with leather sleeves.

11 | And finally, one group of fans I could help out 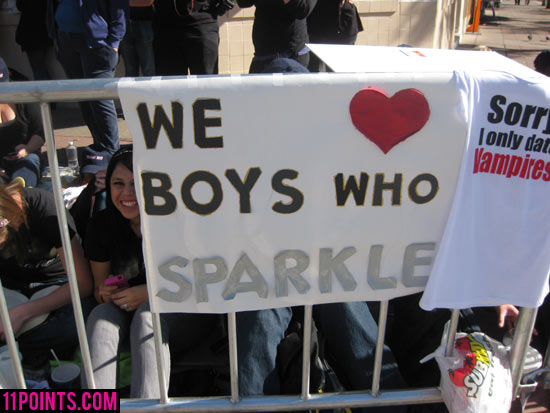 I guess in Twilight, the vampires all sparkle. I learned this after the fact. In the moment, I saw these girls with the above sign.

And told them I know a dude that sparkles! 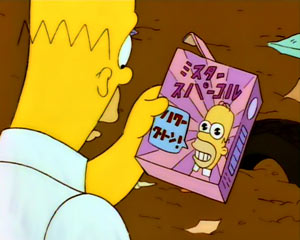 11 Things to Expect If You See Bring It On: The Musical

11 Random Observations at the Baseball Hall of Fame