Ridiculous police blotter entries from newspapers all over, all featuring animals gone wild.

I’ve done one list before on 11 great moments in police blotter history. Today we go back to the glory that IS the newspaper police blotter (estimated date of death: November 2014) for another round of jaw-dropping idiocy… this time focused solely on animals.

1 | Really just a terrible day all around 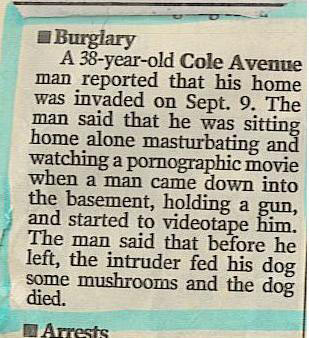 Normally, I’d say I suspect this guy fed his dog mushrooms then tried to blame it on a made-up criminal (like the “some Puerto Rican guy” of South Park fame) — but if you’re going to make up a home invasion story, would you really throw in all those masturbatin’ details? 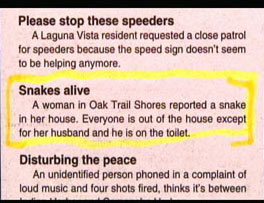 It’s kinda badass when your wife starts screaming about a snake in the house and you decide to ride out your feces before you head outside with her. Hey, if the snake wants to come in the bathroom when this guy’s stankin’ it up, it’s that snake’s funeral, right? 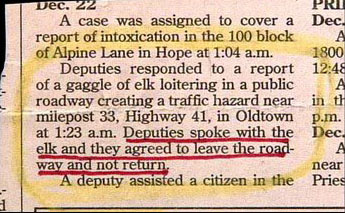 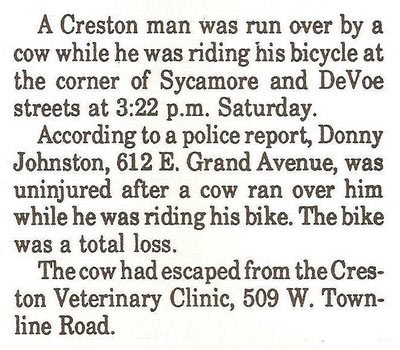 Pretty slick move by the cow breaking out of that veterinary clinic. And I’m guessing he didn’t even have the clinic’s blueprint tattooed on his torso. Next season, the cow’s going to be on a cross-country hunt for D.B. Cooper’s hidden money and the season after that the cow’s going to try to break out of an even more lawless vet clinic in South America.

5 | The hunter has become the hunted 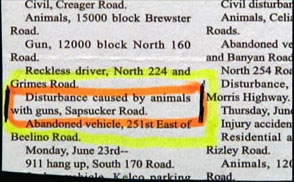 6 | Just drink whatever’s in the pic-i-nic basket you swipe, don’t be a pretentious dick 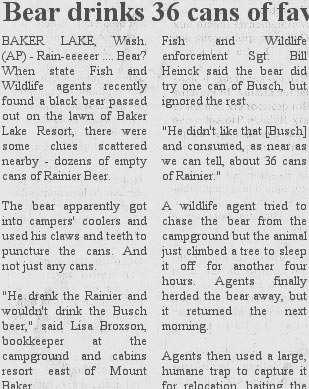 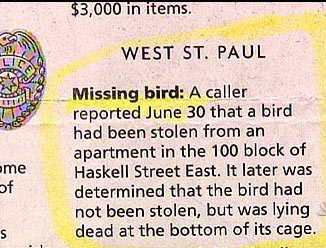 But after the police left, the family got past their tears and it was the best damn Flag Day ever.

8 | Ducks are too damn proud 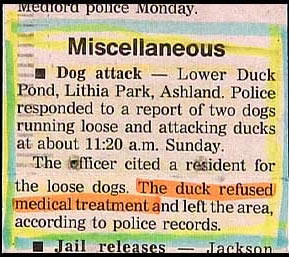 Even if you think you’re fine, always let the doctors take a look. At least that’s what I learned from watching Mariska Hargitay on Law and Order: SVU.

(Also, tangent: There was a period about five or six years back where I was on a huge SVU kick and watched a ton of them. And it messed up my mind. One night I was at a party and someone had passed out drunk on their bedroom floor. As I walked by all I saw was feet, though… and I had a legit two-second thought process that I’d just been the random dude who stumbles onto a dead/abused/mauled body at the beginning of every SVU. That’s a sick place for your mind to be.)

9 | The kitten one is weirder 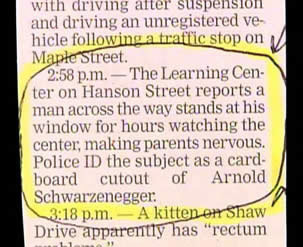 Yes, this clipping gets passed around because of the funny entry about people being scared of a cardboard cutout of Arnold Schawzenegger. But the entry below that about the kitten is a much weirder police blotter entry.

Note to the world: There are some reasons to call the police. Your kitten’s overactive rectum is not one of them. 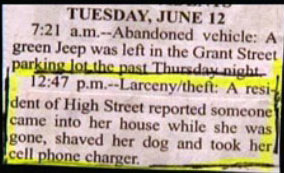 … but did you really have to take my phone charger too? That’s just rude.

Also, on a weird personal side note, I once had a green Jeep stolen, like in the first entry in this clipping. Could it be connected to this dog shaving in some way? 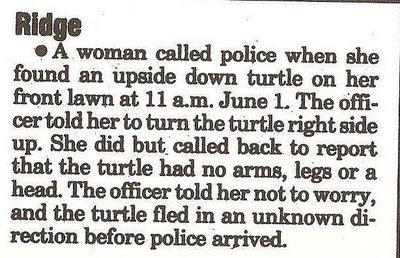 I think this story is really a red flag: The Ridge police department is slower than a receded turtle. That REALLY makes me want to avoid getting carjacked there.