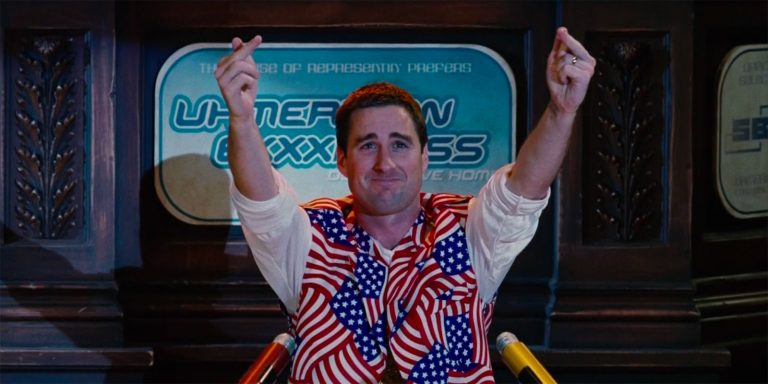 Idiocracy has tons of hidden Easter eggs in the background of its comically dystopian future. And I found ’em.

I’ve been a huge fan of Idiocracy ever since I saw it in the theater. Yes, back in 2006, I was lucky enough to live near one of the eight movie theaters in the country where Idiocracy was shown.

Its burial by 20th Century FOX is well-documented but, fortunately, it did get a proper DVD release… countless others have been able to see it and enjoy it like I did.

I’m not saying it’s perfect. You can almost see Mike Judge’s bureaucratic battles with 20th Century FOX as you watch it — and whether it’s because he ran out of money or the story just ran out of gas, it certainly takes a strange turn in the third act. But there’s enough absolute brilliance in this movie — especially the montage that explains how society became so dumb that makes you say “Jesus, this could actually happen” — that I laughed more watching this movie the first time than pretty much any other.

For this list, I gave Idiocracy the same Zapruder treatment that I employed in the 11 Hidden Secrets in Fight Club.

I scoured the movie for the hidden gems buried deep in the background. Ones that never get mentioned on screen. Ones added solely for fans (and lunatics) like me to find them. Ones that just enhance the world the movie has created.

So here are 11 subtle background jokes and details of Idiocracy — tiny, blink-and-you’ll-miss-’em jokes that contribute to the scariest dystopian comedy ever. 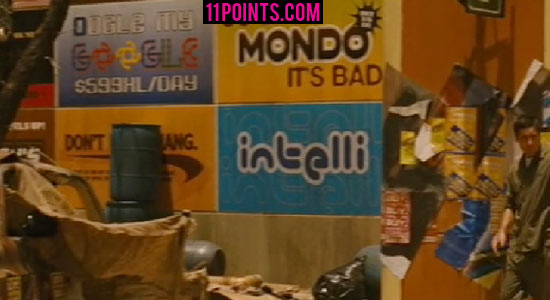 One of the running jokes of the movie is that, basically, every corporation has become a sex company. This is the only sighting of the futuristic Google in the movie — in fact, it’s the only sighting of any web-related company at all — and even the mighty Google has fallen into society’s ‘bating obsession. The ad lets you know you can “Oogle My Google.” 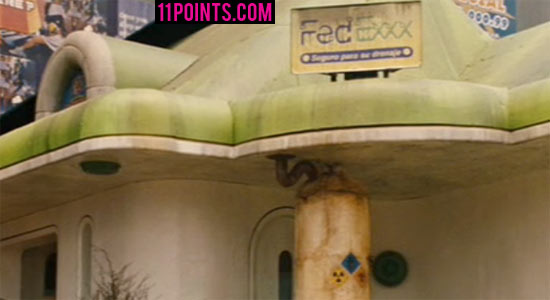 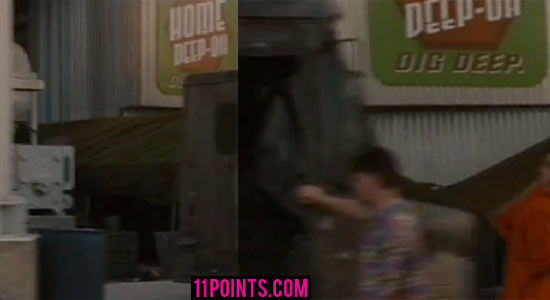 Just like Google, we get quick shots of these companies’ evolutions as well. Home Depot is now Home Deep-Oh (with the slogan Dig Deep). That’s not quite as on-the-nose as a lot of the companies-turned-sex-companies, but, based on context clues, I have to assume that’s what they were going for.

FedEx is now FedExxx (and had this movie been made after their merger, I assume they’d be FedExxx Kinky). 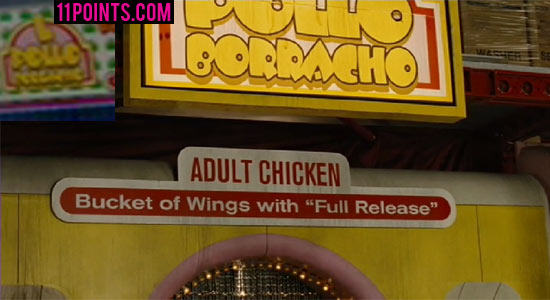 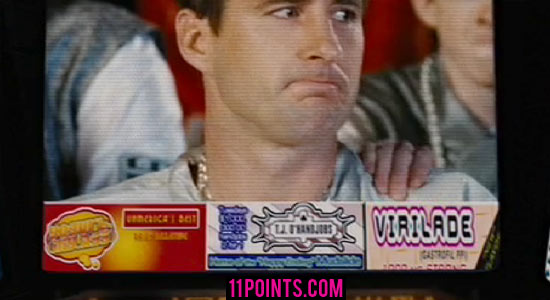 The movie focuses a lot on Starbucks (which became the world’s most popular exotic boutique) and Fuddruckers (which, naturally, evolved to ButtF*ckers). Two other restaurant chains don’t get so much attention but have gone through the Idiocracy time warp as well.

El Pollo Loco has become L Pollo Borracho — from The Crazy Chicken to L Drunken Chicken. And, naturally, you get a full release when you buy the chicken.

Subtler still is T.G.I. Friday’s transformation to T.J. O’Handjobs — the same red-and-white striping, just a bit of a name change… and a shift in how they handle their “flair.” (Mike Judge’s vendetta against chain restaurants like Friday’s had to come into play here — after he eviscerated them in Office Space, a lack of a follow-up would’ve been disappointing.)

4 | The diseases of the future 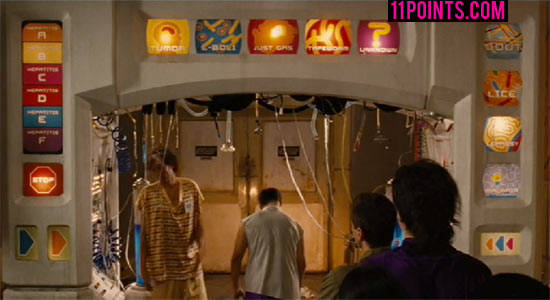 It does not seem that modern medicine made great strides — as the movie says, all they focused on were drugs to stop balding and help erections.

When Joe is in the hospital’s diagnostic area, the Press Your Luck-style disease board is only equipped for: Tumor, E-Boli [their spelling], Just Gas, Tapeworm, Unknown, Gout, Lice, Leprosy, Malaria, and six different kinds of Hepatitis. Either a lot of diseases have been eradicated… or, more likely, a lot of people are getting misdiagnosed with “just gas.” 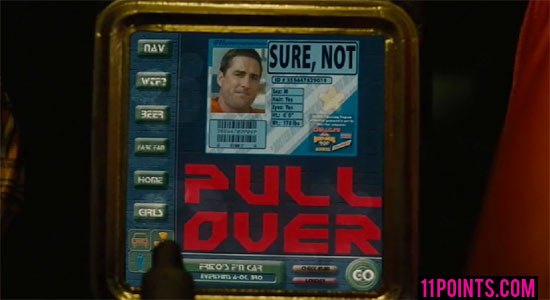 This might be the only piece of technology from the fictional 2505 that really sounds good. The navigation system in Frito’s car offers options like “beer,” “fart fan,” and “girls”… it also lets him know his “f’n car [is] a-ok, bro” and has a simple “Go” button when he wants to start it.

I wouldn’t be shocked to see a customized navigation system like this within the next few years. 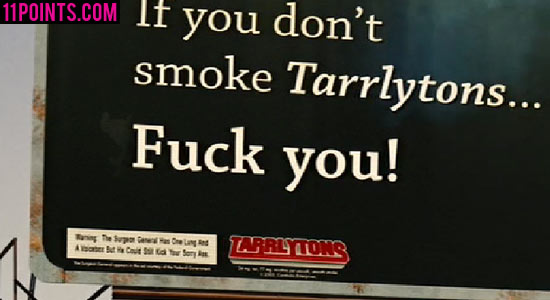 7 | The sponsorship of America 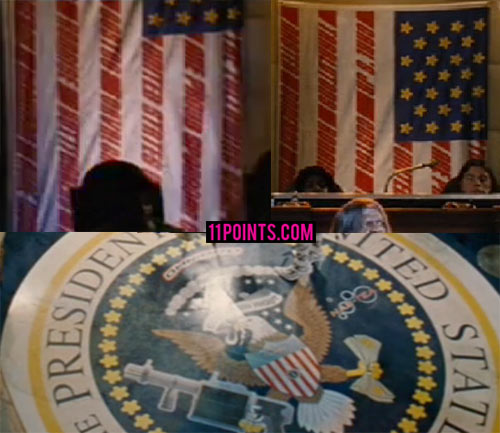 In the Idiocracy future, there are ads everywhere. There are very few frames of the movie where an advertisement isn’t present — and this is, clearly, by design.

Legendary American symbols aren’t immune to this. On the flag, the stars have been replaced by the Carl’s Jr. yellow star logo — and the stripes have become corporation names printed in with red ink. The presidential symbol now features an eagle clutching a gun and money… smoking… and accompanied by an ad for Nas-Tea. 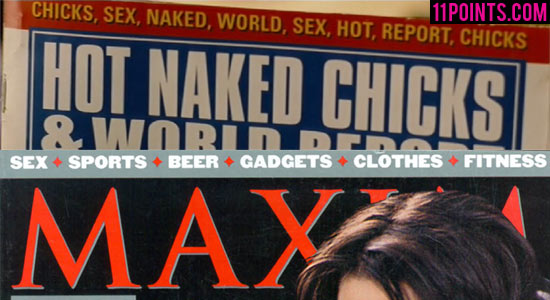 As Joe is figuring out he’s in 2505, he picks up a magazine — called Hot Naked Chicks & World Report. I never noticed before, but along the top of the magazine, there’s a bar that reads like keywords: “Chicks, sex, naked, world, sex, hot, report, chicks.”

That bar seemed stunningly similar to the one that, for many many years, ran atop Maxim magazine. It’s a very subtle dig — while most other companies have to devolve quite a bit to fit in in the idiotic future, Maxim and the whole low-brow guy-oriented media is pretty much there already.

(The keyword choices also perfectly resemble the keywords that so, so many guy-oriented websites load up with. Although I’m not sure how “world” and “report” got in there. Do websites still do that where there’s a giant chunk of text at the bottom of their page where they just repeat the word “sex” over and over? Or did Google get wise to it and stop ranking those pages… and/or see them as competition to their future sex business and cut them off?) 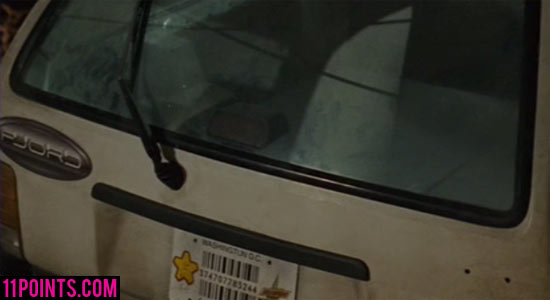 Apparently, Ford has been purchased by a Norwegian company — as it’s now called a Fjord. (The license plate is, of course, sponsored by Carl’s Jr. and the sports drink dreamed by Idiocracy, Brawndo: The Thirst Mutilator.)

10 | What do you want in your erectile medicine? 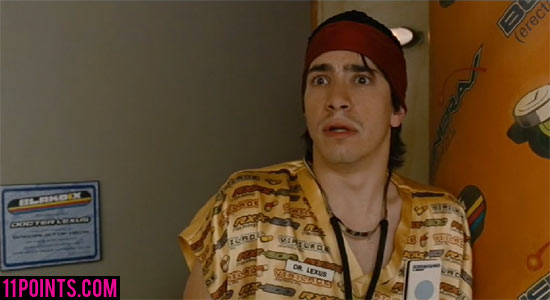 There are a few prescription drugs advertised constantly during the movie (mostly on people’s clothing, all of which is branded in the future). This one particular drug doesn’t get as much play, but has the best name — you can see it behind the doctor (played by Justin Long) — it’s an erection medication called Blakdix. Naturally. 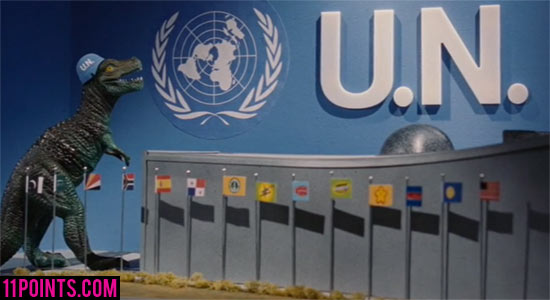 So sure, the U.N. wasn’t founded by a dinosaur. I like the flags outside of it — representing a wildly random assortment of countries and corporations. For countries, I identified the U.S., Spain, South Africa, Seychelles, Palau, Panama, and Pakistan and Saudi Arabia’s flags upside-down. For corporations: CostCo, Carl’s Jr., Brawndo energy drink and Starbucks.

(Pakistan, Palau and Panama are all in a row alphabetically in a list of countries — maybe the production designer just checked off three-in-a-row when he was buying stuff for the set?)

Either way, a dinosaur presiding over a U.N. that was formed by Palau and Carl’s Jr. seems only appropriate for a display in an Idiocracy museum.