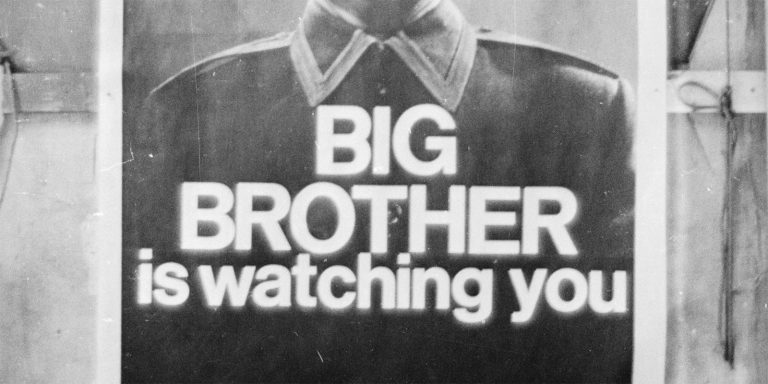 Big Brother, catch 22, yahoo, selling your soul to the devil and more.

But I made the category for a reason — to class up this joint — so I’m sticking with it. And this should be a pretty accessible list: Literary references that we all make… without realizing, remembering or knowing they’re actually literary references.

To keep the list “pure,” I shied away from any literary references that only really became popular because of movies based on books. (Like calling people hobbits, talking about Never Never Land, touring the bridges of Madison County, things like that.)

Big Brother is the name of the omnipresent dictatorship in George Orwell’s 1984. Over time, it’s really evolved into being the go-to term for when the government is over-monitoring its people. But its origins are literary… it’s not just a modern-day cautionary catchphrase or a second-tier reality show featuring anti-Semites occasionally having sex.

Everyone knows about catch 22s… situations where, no matter what choice you make, something bad is going to happen. What most people (including myself, before I started researching this list) don’t realize: Joseph Heller actually created the term when he wrote his novel Catch-22.

The fact that he picked “22” as the number after “catch” was fairly arbitrary. First he wanted to go with “18”, but there was another World War II novel out already with 18 in the title (Leon Uris’s Mila 18). So Heller decided to switch to “11.” But that was in the title of the Rat Pack movie Ocean’s 11, which came out a year earlier. Also I think he could see into the future and didn’t want to step on my gimmick with this website.

Then he went for “17,” but that also got rejected, because of the World War II movie Stalag 17. So, at this point, Heller gave up and randomly picked “14.” His publisher rejected that because they didn’t like the number and think it was funny. So finally, he picked “22,” everyone was cool with it, and a pop culture catchphrase was born.

Ironically, the entire point of referring to doomed situations as catch [anything] was because Heller wanted to point out that, when bureaucracy gets bad enough to cause such problems, they may even start giving those problems numbers. Doubtful that he foresaw the bureaucracy behind actually picking the number for the title of his book.

I would assume that few, if any, people realize that this isn’t a quote from I Love Lucy or a Borscht Belt comedian… it’s actually from Lysistrata, a Greek comedy written by Aristophanes… back in 411 B.C.

The translations vary, but the most commonly accepted one is “These impossible women! How they do get around us! How true the saying: ‘Can’t live with them, or without them.'”

No word on whether Aristophanes wrote any plays about the poor quality of airline food or notable differences between black people and white people.

Using the word “Lolita” to describe a sexually-advanced underage girl actually comes from the novel Lolita, written by Vladimir Nabokov in 1955.

Interesting fact: The 12-year-old girl in the book who the main character becomes sexually obsessed with isn’t named Lolita, she’s named Dolores. Lolita is a nickname Nabokov uses for Dolores.

Scrooge has taken on a pop culture life of its own, but, at its core, it’s still the name of the character in Charles Dickens’s A Christmas Carol.
It’s not just someone who ruins your Christmas or an old rich Scottish duck who dives headfirst into his piles of coins.

When we talk about women luring us in through their sweet, sweet voices (like, for instance, my mysterious and inexplicable love of Kelly Clarkson), we talk about their siren song.

Which, of course, is a reference to the sirens of Greek mythology, most notably mentioned during the non-boring portion of Homer’s Odyssey.

(He also popularized “cyclops.” There you go. This entry is a two-for-one. I should go register 12points.com now.)

It’s a shame that “Uncle Tom” has become such a pejorative term, referring to a black person who tries to assimilate into white culture through subservience. Because the book Uncle Tom’s Cabin, where the term comes from, actually had a major impact in the abolitionist movement.

People say it, and, generally, we know we’re alluding to SOMETHING… it’s just hard to remember what. The answer is Charles Dickens’s A Tale of Two Cities. That’s the opening line.

I didn’t realize this before, but A Tale of Two Cities is actually the best selling novel of all time… and the seventh-best selling book of all time, behind just the Bible, three books by Mao Tse-tung, a Chinese dictionary and the Koran.

We know it either as a way to describe an idiot or as the Betamax of search engines. But… yahoo is really a term that was coined by Jonathan Swift in Gulliver’s Travels. In the book, Gulliver ends up in a country ruled by horses… where they boss around deformed, brutish, primitive humans, called Yahoos.

That’s how the term yahoo entered the cultural lexicon as a way to describe low-brow humans. And, apparently, the guys who founded Yahoo.com picked that name because they felt the word yahoo described the unsophisticated, undeveloped Internet at that time.

This comes from Macbeth. Little tip for future games of Trivial Pursuit: Anytime there’s any Shakespeare quote about blood, it’s probably from Macbeth. That play was blood CRAZY, man. It’s like Shakespeare’s Saw 2.

We all think about selling our soul to the devil once in a while… and not just for a donut… and that’s all thanks to the legend of Faust. Specifically, the versions we all know the best, Marlowe’s The Tragical History of Doctor Faustus and Goethe’s Faust.

Just remember that the next time you talk about selling your soul — you’re not being funny or edgy, you’re referencing classic European literature. Which is edgy only in a King-Grafton-Brown-only airport bookstore.

Honorable mention: An albatross [as a symbol of bad luck], Rime of the Ancient Mariner; winter of our discontent, Richard III; chasing a white whale, Moby Dick; the sky is falling, Chicken Little; Shylock, all that glitters is not gold and a pound of flesh, The Merchant of Venice; men are from Mars, women are from Venus, Men are From Mars, Women are From Venus; Abandon all hope, ye who enter here, The Inferno; all for one and one for all, The Three Musketeers; oompa loompa, Charlie and the Chocolate Factory; through the looking glass and off with her head, Alice in Wonderland; cry wolf, The Boy Who Cried Wolf; Doubting Thomas, The Bible; to be or not to be, that is the question, Hamlet; parting is such sweet sorrow, Romeo and Juliet; yo ho ho, and a bottle of rum, Treasure Island; it’s all Greek to me, Julius Caesar; never do tomorrow what you can do today, David Copperfield; all the world’s a stage, As You Like It; what the dickens, The Merry Wives of Windsor; kiss and tell, Love for Love; Are you there God? It’s me, _______?, Are You There God? It’s Me, Margaret; I haven’t slept one wink, Cymbeline.

11 Pieces of Evidence Shakespeare Was Gay