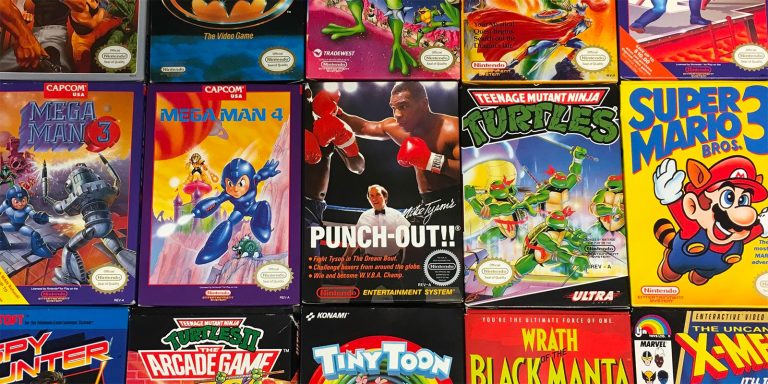 Sometimes the NES box art didn’t QUITE match the actual game — not even close.

Yesterday, I wanted to find out about the new Super Mario Galaxy game. So I Googled it, watched a few trailers and looked at some screenshots. I know what the game looks like, I can see how it plays… and if I want to test it for myself, after it’s released, I can rent it or play it at Best Buy, or try to, in a totally un-creepy way, befriend an 11-year-old so I can borrow his copy.

This all stands in stark contrast to how things were back when the Nintendo craze engulfed us all 25 years ago. Before there was the Internet, or Nintendo Power magazine or game rentals, sometimes, you had to decide which game you would lust after from… its box.

And the video game makers knew it. So they didn’t put the actual 8-bit screenshots on the game boxes. They put much cooler (and sometimes, completely incongruous) art on the box. And this list is a tribute to that.

Here are 11 old NES games where the box art paints an egregiously-deceptive picture of what the game is actually like. 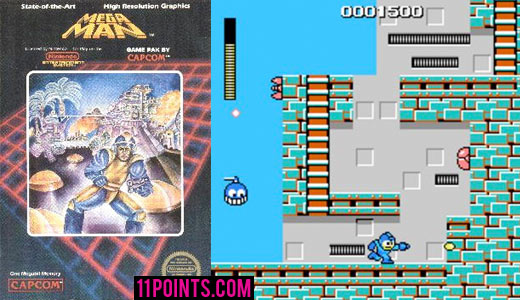 What the box says: This is the Mona Lisa of box art incongruity — so much so that Capcom, the people behind Mega Man, parodied it when they released Mega Man 9 a couple of years ago. Here, we’ve got an angry old man in a puffy-sleeved blue-and-yellow outfit, wielding a small gun as he travels through what seems to be a futuristic tropical landscape.

What the game really is: A much younger and less bitter guy in a blue-on-blue suit, with a gun for an arm, who battles bosses like Fire Man and Guts Man. This is a rare case where the game in actuality is way better than the game that was drawn on the box. 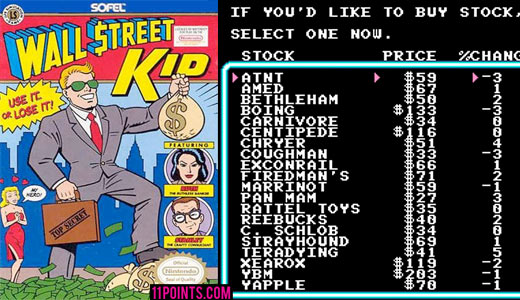 What the box says: The main character appears to be a Billy Zabka-inspired yuppie… but with his build and the comic book-style presentation, you get the feeling he’s actually a superhero under there. How else could he have gotten his hands on an elusive sack-of-money-with-a-dollar-sign-on-the-bag?

What the game really is: A text-based game with no actual action where you trade fake stocks for a few months. I don’t know if I’d want to invest in Marrinot, Rattel Toys or Reebucks. Kinda makes me feel like I’m investing in Magnetbox, Panaphonics and Sorny. 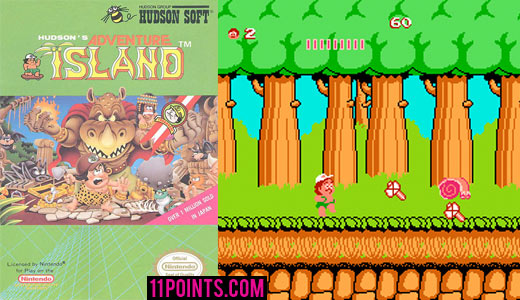 What the box says: A wild island fantasy adventure with giant rhinos and treasure. And you appear to be a feisty, chubby, younger Fred Flintstone who’s right in the middle of saying something sassy to the fire-throwing giant rhino. (Did somebody say… sassy?)

What the game really is: A main character with one-one-millionth the attitude throwing tomahawks at snails. Really. I’m not saying that just because of the screenshot. I used to play this game and, as I recall, there are a lot of tomahawks and a lot of snails. 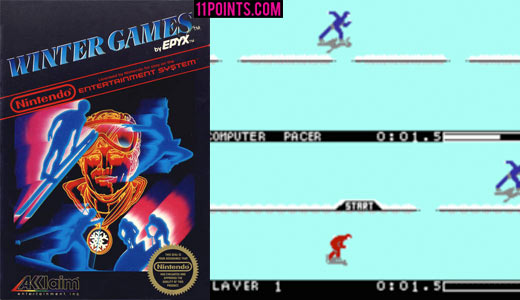 What the box says: Neon, 3-D adventures await you! We’re shoving so much radical neon and 3-D at you that you won’t even notice one of the four totally rockin’ silhouettes is of a figure skater in a tutu.

What the game really is: Dull-colored, 2-D Atari-esque skating and skiing competitions. (But hey, it still looks better than Mario and Sonic at the Olympic Winter Games, am I right? Hello? Ladies?) 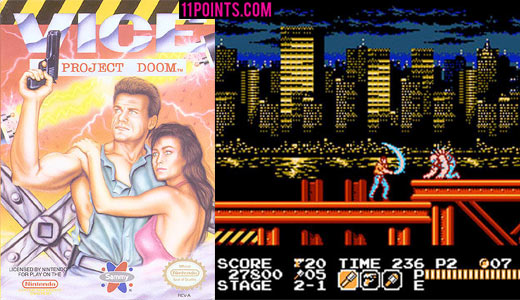 What the box says: Huey Lewis and a Thai prostitute of unknown gender go on a hazardous, shirt sleeve-rippin’ urban adventure.

What the game really is: It appears to be the hazardous urban adventure we were promised. However, I see no sign of Huey Lewis OR the News. 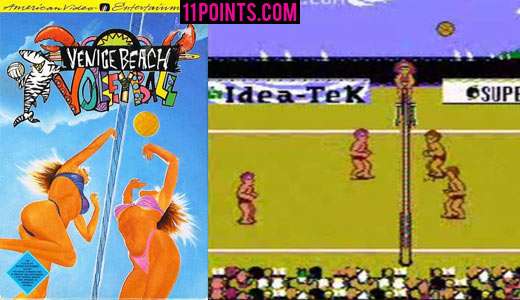 What the box says: String bikinis and underboob tan lines! Female beach volleyball players who can’t elevate over the net because their disproportionate breasts are holding them down! And don’t worry about how to spell Volleyball — we don’t know, but we do know sex!

What the game really is: So-so low-intensity volleyball action, with nary an underboob in sight. 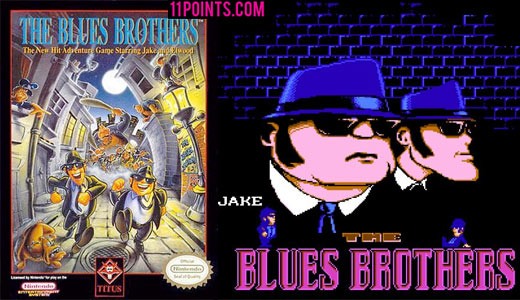 What the box says: You loved the Blues Brothers, right? Now you can be the one who controls them driving through the mall, dodging neo-Nazis, outsmarting the cops and having all sorts of other unbelievable adventures.

What the game really is: Terrible versions of Aykroyd and Belushi… no music, which belies the entire Blues Brothers concept… and enemies like bear traps and runaway shopping carts. This is often considered one of the worst video games based on a movie ever… and that’s SAYING something. Belushi deserved better. 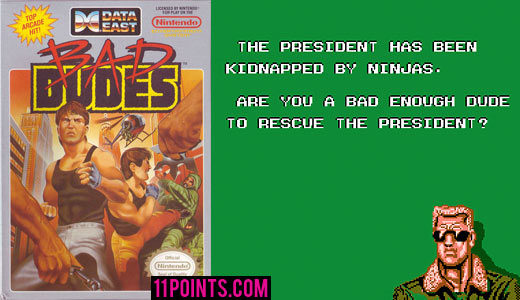 What the box says: Generic Double Dragon ripoff where they threw every cliche against the wall — karate stance! kicking Middle Easterners! helicopters! skyscrapers! throwing stars! Not worth your trouble.

What the game really is: The president has been kidnapped by ninjas!?! Not getting this game when I was a kid has vaulted into the top three regrets from my childhood. (Not growing more would be number one.) 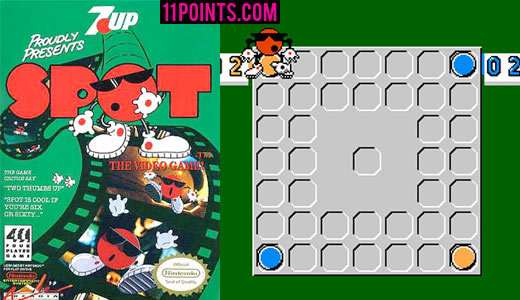 What the box says: Spend $40+ on a game that’s one big 7up commercial. We won’t tell you what the game’s about but look — it’s a film reel of Spot. With his hip attitude and Poochie sunglasses. Play this game and you’ll feel like you’re a part of the Hollywood scene.

What the game really is: Oh… it’s just one of those colored disc board games that seem kinda interesting but you give up after a few days. I really should’ve spent my money on the Yo! Noid video game instead. 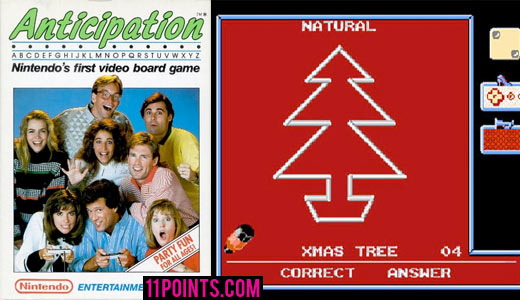 What the box says: Gather up all the white people you know and get ready for some mouth-agape virtual board game madness! (Seriously. Couldn’t they have at least tried to Photoshop a black person in there?)

What the game really is: Watching a computer play connect the dots. No wonder all of my black friends are off doing more interesting stuff. 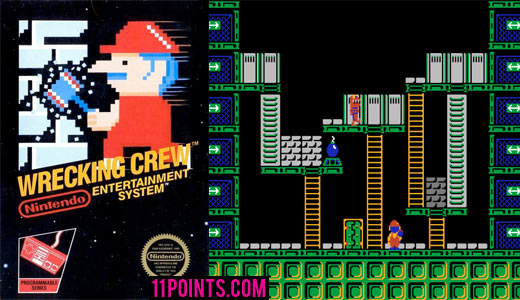 What the box says: Holy shit, it’s not even 1986 and there’s already a new Mario game. And instead of breaking bricks with his head he now breaks them with a hammer. You’ve got to be the first kid to get this game. Then maybe everyone will stop pantsing you.

What the game really is: So Mario can’t jump, there’s no adventure storyline and all I do is break stuff? I can’t believe Nintendo would bastardize Mario by putting him in a game that’s not an epic adventure. I’m sure they’ll never do that again.